All Artists
F
FRIEDRICH, Caspar David
Wanderer Above the Sea of Fog 1818 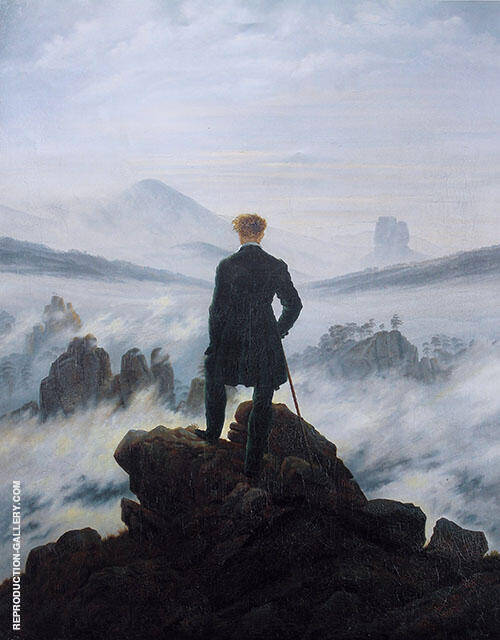 Caspar David Friedrich Wanderer Above the Sea of Fog

Painted in 1818, Casper David Friedrich’s Wanderer Above the Sea of Fog is a masterpiece of Romantic art.

As one of the most famous German painters of all time, Caspar David Friedrich paintings of allegorical landscapes and motionless contemplative figures are particularly well-known.

What is depicted in Wanderer Above the Sea of Fog?

Wanderer Above the Sea of Fog presents a fashionable gentleman, cane in hand, standing and gazing into a misty valley. Vague mountains and rolling hills are just visible in the background, whilst trees and rocky outcrops emerge from the middle distance. The fog-covered landscape drifts off indefinitely away from the viewer, eventually indistinguishable from the horizon.

The man’s position (with his back to the viewer) adds to the mystery of the painting.  His emotions and facial expressions remain something purely created by our own imagination. We can see he wears a dark jewel-green coat to protect against the mountain wind. His stance suggests confidence and physicality, yet there’s an indisputable melancholy to the piece.

A Masterpiece of Romantic Landscape Painting

Scholars identify geology from the Elbe Sandstone Mountains stretching across Saxony and Bohemia. Friedrich often sketched “en plein air” but then rearranged his drawings back in the studio. Only once he was happy with the overall composition did he begin to paint.

Identifiable features include the Zirkelstein (a striking 40 meter sandstone table hill in Saxony) and the heavily weathered Kaiserkrone on which the man stands. Along with the Zirkelstein, this table hill rises from the low-lying Schöna valley. It is this particular geography that explains the intensely foggy scene. The mountains in the background are either the Kaltenberg or the Rosenberg peaks, although debates rage as to their exact geographic identity.

Romantic landscape painting particularly explored man’s relationship with nature and our ongoing conflict with the natural world (and ourselves). It was partly a reaction to the emergence of the Industrial Revolution, and followed the Age of Enlightenment.

In an age of rapidly expanding cities, production lines and gray factories, the Romantics were revolutionary in their rejection of capitalist logic. Their work also firmly rejected the previous neoclassical rules of strict compositional harmony and balance.

Wanderer Above the Sea of Fog Meaning

Subjectivity and individuality were the watchwords of the Romantics. Evidenced throughout practically all Caspar David Friedrich artworks, these ideas fundamentally inspired the artist. Wanderer Above the Sea of Fog is particularly representative however, seen as an icon of philosophical and existential self-reflection. Akin to Socrates’ famous maxim “know thyself”, critics praise the painting for its intense contemplative nature.

Speaking of his art, Friedrich said an artist should paint “what he sees inside himself”. For Friedrich, this was of equal importance to figurative representation. Modern art historians (such as Christopher John Murray) agree with this interpretation. Murray notes how Caspar David Friedrich paintings all push our “gaze” towards their “metaphysical dimension”.

As well as its influence on the art world, Wanderer Above the Sea of Fog has shaped modern conceptions of travel, exploration and mountain-climbing. It promotes ideals of lone visionaries and explorers, boldly treading new paths and ideas. Indeed, the idea that standing at the peak of a mountain was anything to be celebrated was a revolutionary concept in itself. Up until this point, the climber-hero ideal simply hadn’t existed.

The painting currently hangs in the Hamburger Kunsthalle, an art museum in Hamburg, Germany.

Wanderer Above the Sea of Fog 1818
By Caspar David Friedrich