All Artists
B
BOUGUEREAU, William Adolphe
The Wave 1896 (La Vague) 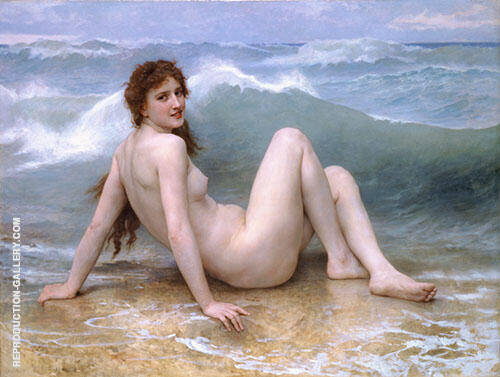 William Adolphe Bouguereau painted the Wave (or “La Vague”) in 1896.  It is the artist's most recognizable and controversial oil painting.

What type of artist was William-Adolphe Bouguereau?

Bouguereau was a leading painter of the French Academic school. With influences including Neo-classicism and Realism, his art often depicted mythological subjects with precise attention to detail.

In 1881, Bouguereau became president of the Société des Artistes Français. Due to this position, he enjoyed significant influence over the Paris Salon. Bouguereau consequently wielded substantial power over the French art world as a whole.

La Vague was Bouguereau’s submission to the 1896 Paris Salon. It represented the classical approach and subject matter frequently seen in other William Bouguereau paintings. Indeed, classical images such as Botticelli’s Birth of Venus and Greco-Roman sculpture significantly influenced.

While there may be parallels with famous Wave depictions (such as Hokusai’s The Great Wave), the western academic tradition was Bouguereau’s primary influence. Gustave Courbet’s 1869 depictions of The Wave could have also influenced Bouguereau. Whether Bouguereau saw the Courbet artworks remains unknown, however.

Despite this opposition to new approaches, La Vague departed considerably from traditional representations of Venus. Stripped back to its most basic narrative elements (Venus and the sea), the lone woman is the sole focus of the composition.

Seated gracefully on the sand, she almost floats above the encroaching tide. Her gaze directly engages the viewer, producing an incredible feeling of immediacy.

Why did Bouguereau paint The Wave?

Today, La Vague enjoys celebrity as the famous nude painting in the western tradition. Fascinated by the female form, Bouguereau depicted Venus and bathing women on many occasions.

The “real” woman in The Wave was Odile Charpentier. Charpentier modeled for Bouguereau several times, serving as a creative muse and confidante.

Amongst William-Adolphe Bouguereau's art, The Wave celebrates stunning accuracy and realism. A master colorist and draftsman, Bouguereau took great pride in his ability to recreate the natural world faithfully.

He often spent hours sketching seemingly tiny and insignificant details (for instance, a hand or ankle), meticulously building up the final piece. Reflecting on this careful working method, Bouguereau undertook a small graphite study and a preparatory oil study before completing La Vague.

While Bouguereau depicts the woman’s body in incredible detail, his painting pays equal attention to the waves and the sea. One can almost feel the ocean’s spray and foam, with the moody horizon visible in the distance.

How much are Bouguereau's paintings worth?

The following year, Christies auctioned another artwork, La Charité (1878), for a cool $3.53 million.

William Adolphe Bouguereau's paintings haven’t always performed this well, however. The artist has gone in and out of fashion over the years. In 2019 La Jeunesse de Bacchus went up for auction at Sotheby’s. Despite the staggering guide price of $35 million, the painting failed to sell.

Reproduction oil paintings are 100% handpainted by one of our professional resident artists.