All Artists
B
BOTTICELLI, Sandro
The Birth of Venus c 1483 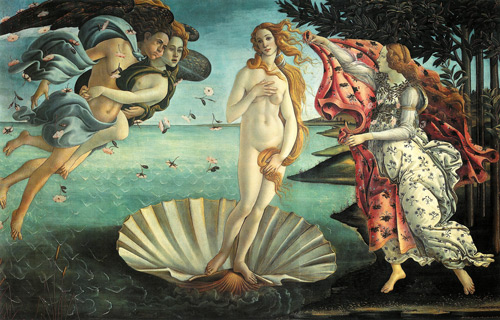 Sandro Botticelli The Birth of Venus

Painted in the mid-1480s, Sandro Botticelli’s Birth of Venus is one of the most recognizable early renaissance paintings. Although titled The Birth of Venus, it actually depicts the moment the goddess Venus arrives on the idyllic shores of Cyprus.

The Theme of the Birth of Venus by Botticelli

The painting is based on classical Greek and Roman mythology. As the goddess of love, Venus was born from sea spray itself. Blown towards the shores of Cyprus by the winds Aura and Zephyr, she stands atop a giant scallop shell. Her skin is even more pearlescent than the shell, with Venus’s swirling hair covering her modesty.

Borrowed from classical statues and figurines, Venus’s pose as well as other compositional elements hark back to Hellenistic artworks in the Medici family’s collection.

On the shore, Venus meets a female attendant. Identified as either Hora of Spring, or one of the three Graces, the woman presents a flowing pink shawl covered in floral motifs. Many scholars believe Hora of Spring is the more likely candidate, referencing the rose petals blowing through the scene.

Indeed, another celebrated work, Botticelli’s Primavera also references Spring; reated in 1482, it was directly painted on wood panels, whereas the Birth of Venus is tempera on canvas.

Why did Sandro Botticelli paint the Birth of Venus?

Likely commissioned by a member of the powerful Florentine Medici family, the painting is surprisingly mysterious given its subsequent fame. Although endlessly analyzed by art historians, Botticelli’s own intentions remain elusive.

There are some clues though. Giorgio Vasari described the painting hanging in the Villa of Castello (owned by the Medici family). The Medici theory is further supported by the orange trees at the top-right of the composition.

Known as “mala medica” in Italian, oranges were a symbol of the Medici family. This was due to the similar sounds of their names. There are also laurel trees, a possible punning reference to Lorenzo Medici (the “Magnificent”).

Why was the Birth of Venus important?

Amongst famous Botticelli paintings, the Birth of Venus is important for its amalgamation of artistic styles. As well as Greco-Roman inspiration, the work further references popular gothic styles. This is particularly evident in the woman’s off-center, slightly curved body.

Venus appears to float above the shell rather than standing firmly on its surface. Her elongated arms, legs and body follow the swirls of her golden hair, foreshadowing later mannerist approaches.

Eschewing classical realism, the woman’s pose would actually be impossible to hold in reality. Her weight is shifted too far to the left. An insignificant detail at first glance, this is actually of integral importance to the painting.

Botticelli rejected dominant naturalistic styles exemplified by contemporaries such as Ghirlandaio, opting instead for mythological symbolism. The trees and grass are highly stylized, as is the sky. In a comparable manner, the azure waves form regular, rhythmic patterns. Even the bulrushes in the left-hand side of the painting are incongruent, as they don’t grow in salt-water environments.

Where is Botticelli’s Birth of Venus?

Today, this masterpiece of early renaissance paintings hangs in the Uffizi Gallery in Florence, Italy.

Botticelli was born in Florence in around 1445 and died in 1510 and unlike other artists of the period he never traveled from his place of birth.

Italian Renaissance Movement artist Sandro Botticelli trained initially as a goldsmith but then as an artist under the tutelage of Fra Filippo Lippi, a leading Florentine painter, who enjoyed the patronage of the Medici family.

By the 1480’s Botticelli was regarded as a leading Portrait painter although he is known for his large religious paintings.

Botticelli’s mythology paintings, The Birth of Venus and Primavera are his most famous and both are held by the Uffizi Gallery in Florence.

Primavera was painted c1470 and brings together a group of classical mythology figures in a garden. The general consensus is that this painting heralds the coming of Spring and it is thought to have been commissioned by a member of the Medicis, although no records confirm this.

Botticelli’s The Birth of Venus is often mentioned in the same sentence as Primavera. The Birth of Venus painting depicts the Goddess Venus, who is emerging from the sea whilst riding on a seashell which is being driven by the breath of Zephyrus.

Both paintings are iconic Renaissance art masterpieces which had a profound influence on the 19th century Pre-Raphaelite art movement.

The Birth of Venus c 1483
By Sandro Botticelli