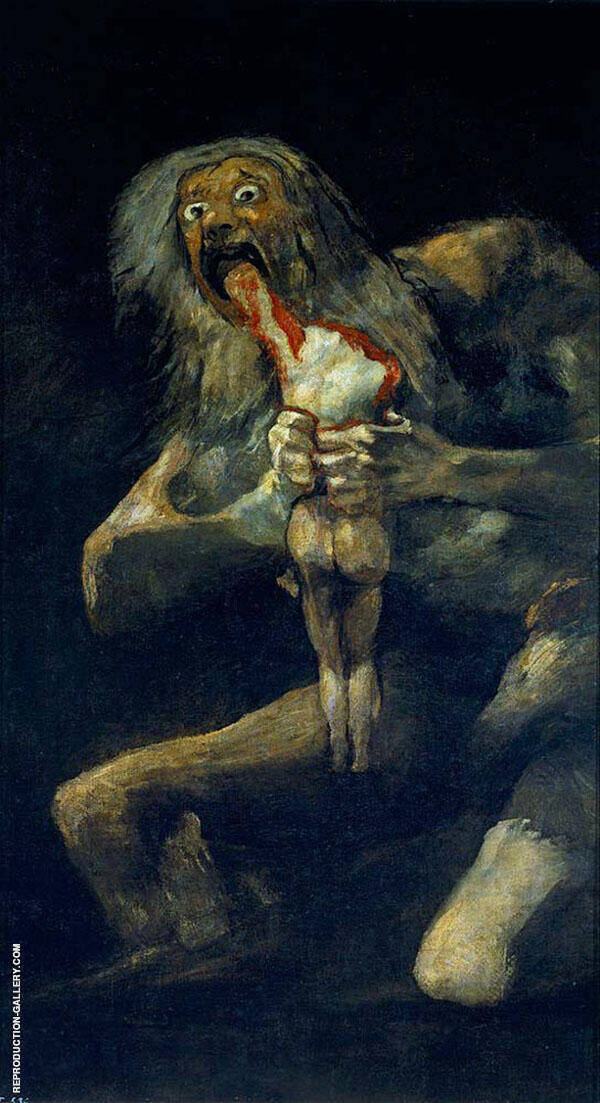 Amongst Francisco Goya famous paintings, one particularly stands out. This is Saturn Devouring His Son, painted between 1819 and 1823.

Depicting the Greek myth of the Titan Cronus eating his son (better known as Saturn in Roman mythology), it’s a truly violent and shocking image.

Why did Francisco de Goya paint Saturn Devouring His Son?

During the years of 1819 and 1823, Goya painted a uniquely disturbing series of murals on the walls of his home. He never wrote about his reasons for creating the artworks, or even gave the paintings titles. Despite this, they offer fascinating insights into the artist’s state of mind.

Goya purchased a property in 1819 named “Quinta del Sordo”. Translated as Villa of the Deaf Man, this title was particularly fitting for Goya. Named after a previous deaf occupant, Goya also suffered from hearing problems after a fever in 1792.

His murals utilized mixed media, adorning almost every room in the villa. Art historians believe Goya originally decorated the various rooms with more uplifting imagery in bright colors. Over the years however, he painted over these artworks with the darker images we see today.

Created entirely for Goya’s own delight (there was no external commission or discussion on the murals) they accurately reflect his troubled state of mind. Indeed, this period of Spanish history witnessed war, violence and terror fueled by the Spanish Inquisition.

Why did Saturn eat his sons?

The Greek Titan Cronus (or the Roman God Saturn) feared murder at the hands of his children. He consequently consumed each child moments after their birth, after hearing a prophecy foretelling his demise.

The Roman myth told how Saturn previously overthrew his father (Caelus). Saturn ate each of his children in turn, including Vesta, Dis, Ceres, Juno and Neptune. After this bloodshed however, his wife hid their sixth child (Jupiter) on the island of Crete.

To fool Saturn, she gave him a stone wrapped in children’s swaddling to eat. Realizing Saturn’s worst fears, Jupiter eventually overthrew his father, just as the fates predicted.

In an intriguing detail, mythology usually describes Saturn swallowing his children whole. He later regurgitated each child alive, after swallowing the fateful stone.

Goya changes this detail however, depicting the God ruthlessly chewing on a naked body. He’s already bitten-off the head (and probably the right arm too) and is currently gnawing on the figure’s left arm.

Art historians have questioned the age of the dead figure however (placing doubt on the link with the myth of Saturn), as the body appears fully-grown. As Goya didn’t leave written evidence or titles for his works, this will ultimately remain an art historical mystery.

What is the message of Saturn Devouring His Son?

The Goya oil paintings in Quinta del Sordo are particularly oblique in their meanings. Even the subject matter and dating has been hotly contested for centuries.

Painted in Goya’s dining room, Saturn looms from the darkness. His eyes bulge madly and his mouth gapes wide-open. The only brightness in the mural comes from the bright red blood dripping down the victim’s body as well as the white flesh, Saturn’s eyes and gnarled knuckles.

This could represent a message of “youth against old age” or time as the inevitable devourer of life. During this period, Goya lived with his young housekeeper (and possibly mistress). His own aging and ill-health increasingly played on his mind.

Equally, for a country going through the Spanish inquisition, the implacable wrath and punishment of God is an appealing theory. Given the wars and violence occurring in Spain at the time, the painting could also serve as an allegory for the fatherland eating its own children.

Other interpretations point towards Goya’s own son (Xavier). As the only one of Goya’s six (known) children to survive, this provides a fascinating parallel with the Greek and Roman myths.

Artistically, Goya may have also seen Peter Paul Rubens’ Saturn Devouring His Son (1636). Hanging in the Museo del Prado, Rubens’ version is less directly ferocious than Goya’s. Nonetheless, it depicts a calculating and malicious Saturn devouring his infant son (this time represented as a baby). The flesh stretching from the baby’s chest into the old man’s bearded mouth is especially gruesome.

Is Francisco Goya Saturn Devouring His Son an example of Romanticism?

Goya black paintings are truly original and unique examples of Romanticism. They also demonstrate the cross-over into Realism championed by painters such as James McNeill Whistler.

As an artistic movement, Romanticism emphasized individual emotion and intuition. It was highly suspicious of scientific logic and deductive reasoning. Art had to originate from the personal imagination of the artist, unconstrained by artificial rules and technical styles.

Artists working in the genre (with Goya a prime example) focused on ancient narratives as well as intense emotion. Saturn Devouring His Son is particularly representative of the movement’s emphasis on powerful negative emotions such as awe, terror, horror and fear.

For Goya, these emotions originated from our direct relationship with the sublime and nature. He had a deep-seated personal fear of madness, and these feelings are especially evident in the Black Paintings series.

Did Goya paint the Black Paintings?

The “Black Paintings” refer to a group of fourteen Francisco de Goya paintings created during his later years.

There has been some speculation surrounding whether Goya actually painted the artworks. His authorship is convincingly demonstrated by multiple scholars, however.

Painted directly onto the walls of his villa, they employ an unusual color palette consisting almost exclusively of blacks and browns. The contrast with Goya’s sunny earlier works (particularly portraits such as The Marquesa de Pontejos and The Kite) explains the popular shock at these artworks. Interspersed by the smallest specks of whites and greens, the ominously dark and gloomy effect is overpowering.

Transferred onto canvas after Goya died, the murals now hang in the Museo del Prado in Madrid, Spain. The Belgian banker and Consul Emile d’Erlanger purchased the property in 1874, ordering their removal shortly thereafter.

This act has since met with controversy. Although overseen by the chief art restorer at the Museo del Prado (Salvador Martinez Cubells), at least one critic has described the act as “hacking” the murals off the walls.

Today, the paintings are in a relatively poor state, resulting in the loss of much original detailing. Despite this, Goysa's famous painting, Saturn Devouring His Son. has fared the test of time much better than many of his other murals.

Goya was born into a lower middle class family and at aged 14 began to study painting, firstly in Aragon, and later in Madrid. Failing to win a Scholarship to the Royal Academy in Madrid, Goya funded a visit to Rome, where two of his earliest paintings Sacrifice to Vesta and a Sacrifice of Pan were completed.

In 1777 Goya returned to Madrid and won a commission to design a series of tapestries for the Royal Tapestry Factory. Over a five year period Goya designed some 42 patterns that were used to cover the stone walls of Spanish Royal palaces, such as El Escorial. Goya was commissioned to paint a portrait of the Count of Floridablanca in 1783. From that time on Goya became a Royal favorite and in 1790 he was appointed First Court Painter. Goya portraits were commissioned by many members of the Spanish Aristocracy. Goya portraits also include scenes of the Spanish Royal Family.

Goya’s best known portraits of Spanish nobility are The Count of Floridablanca, 1783, owned by the Bank of Spain in Madrid, The Family of Infante Don Luis 1784 owned by the Magnani-Rocca Foundation in Italy and The Marquesa de Pontejos 1786, owned by the National Gallery of Art in Washington DC.

Manuel Osorio Manrique de Zuniga 1788, and The Countess of Altamira and her Daughter 1788, are housed at the Metropolitan Museum of Art in New York.

Famous paintings by Francisco de Goya include The Parasol 1777, The Swing, 1779 and The Snowstorm 1786 all of which are held by the Prado Museum in Madrid.

Goya’s most famous painting, and the first life sized female nude portrait painting in Western art, is La Maja Desnuda. The painting was a commissioned by the Prime Minister of Spain, Manuel de Godoy, for his private collection and a second painting, this time with the same model fully clothed, La Maja Vestida – The Clothed Maja, 1805, was also commissioned. The two paintings sit happily together in The Prado Museum in Madrid. Both Goya Maja oil paintings are available as reproduction paintings on canvas from our online catalogue of replica oil paintings for sale.

Goya’s career changed when the French army invaded Spain in 1808, in the Peninsular War from 1808 – 1814. During this period Goya is known to have worked for the new French King Joseph, the brother of Napoleon, but Goya’s two best known paintings of the period were painted after the war: The Third of May, 1808 and The Second of May 1808 both reside in the Prado Museum in Madrid.

Goya painted a series of 14 paintings known as the Black Paintings, which were in fact murals painted in oils directly on to the walls of his farmhouse. Francisco Goya black paintings were completed from 1819 onwards after he suffered from an unknown illness that left him very weak and deaf. The most famous of these works are Saturn Devouring His Son The Dog, The Fates, Monk Talking to a Blind Woman c1824, and Witches Sabbath

After Goya’s death in Bordeaux in 1828, the murals were carefully cut from the walls and restored, and later donated to the Spanish Government. All fourteen murals, now transferred to canvas and wooden frames, are on display at the Prado Museum in Madrid.

Goya painted The Colossus in 1808-1812 also known as The Giant. Although this oil painting pre-dates Goya’s black paintings, it is clear that the technique references his art from that time.

Art reproductions on canvas are created entirely by hand by our resident professional artists and all of Goya’s Romanticism paintings are offered in a large choice of sizes.