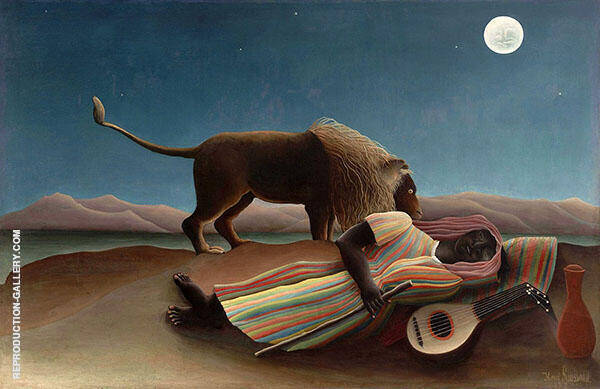 From all of Henry Rousseau paintings, The Sleeping Gypsy is one of the most famous examples of primitive artwork. This oil on canvas painting reveals a mysterious atmosphere and imaginative subject matter which has captivated art-lovers ever since its inception.

When did Henri Rousseau paint The Sleeping Gypsy?

Painted in 1897, The Sleeping Gypsy is a dream-like depiction of a woman and a lion, illuminated by the light of the moon.

Rousseau first exhibited the oil painting at the Paris Salon des Indépendants that same year. As a proud resident of Laval (a municipality in western France), Rousseau hoped the town’s mayor would purchase the work.

Sadly, the painting didn’t appeal to mayoral tastes. Instead, a Parisian charcoal merchant purchased the work.

What is the meaning behind The Sleeping Gypsy?

The Sleeping Gypsy, like much Henri Rousseau art is shrouded in mystery. Despite this, there are certain clues to its meaning.

For instance, Rousseau described the woman as a mandolin player. He identified the vessel beside her as containing drinking water. Rousseau further specified the woman lay in a deep sleep, overcome by extreme fatigue.

Amidst this unusual subject matter, the artist went on to describe how a lion chances upon the scene. Whilst the ferocious animal picks-up the woman’s scent, it does not attack. Overall, Rousseau described the painting as having a “moonlight effect, very poetic.”

Rousseau joined much of the French elite in his fascination with “wandering gypsies”. Referred to as “bohémiens”, Romany people were discussed and fetishized for their position on the fringes of French society.

Common contemporary perceptions linked Romany people with Egypt and Bohemia. This explains the arid landscape of Rousseau’s dream-like world, as well as the woman’s dark-skinned appearance.

In addition, the painting suggests a desire for a pre-industrial past. At this time, France (and Paris in particular) witnessed massive changes as a result of the Industrial Revolution. In contrast to the world of capitalist logic, the Romantic and Primitive painters aimed to reconnect with our emotional selves.

Of course, as with any attempts to create this deeper level of connection, danger lurks. The lion’s unnerving eye gazes directly towards the viewer, challenging our bravery. The woman’s razor-sharp teeth further evoke a sense that this mysterious world is teetering on the edge of dream and nightmare.

How was The Sleeping Gypsy created?

Largely self-taught, the artist worked as a tax collector by day. Due to his unusual techniques and subject-matter, Rousseau was repeatedly denied entry to the highly traditional Académie Française.

Despite (or perhaps because of) this rejection however, Rousseau was later lauded by the twentieth century French avant-garde artists. Along with Henri Rousseau’s The Dream (1910), The Sleeping Gypsy has since become an icon of modern art.

Rousseau may have also viewed colonized individuals “displayed” at the 1889 Paris World’s Fair. Popular French illustrations and adventure stories also depicted images of French imperial conquest, all sources Rousseau may have used in the creation of his famous painting.

The Sleeping Gypsy 1897
By Henri Rousseau