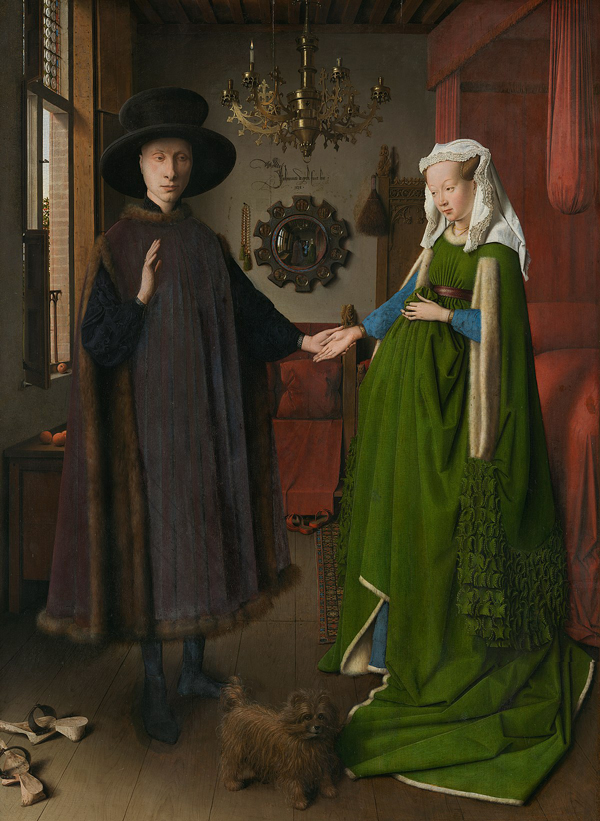 The Arnolfini Marriage by Jan van Eyck is one of the crowning glories of early renaissance art. Painted in 1434, it depicts a wedding portrait of the Italian merchant Giovanni di Nicolao Arnolfini and his wife.

This artwork appeals to critics and the general public for various reasons, including its astounding beauty. Aside from aesthetic value, the painting is groundbreaking in its intricate iconography, perspective, and geometry.

Jan van Eyck artworks were as revolutionary as the proto-renaissance masters such as Giotto or Fra Angelico.  These artists changed what it meant to produce great art, forever altering our approach to form, color, and painterly techniques.

Painting the Marriage of Arnolfini

For a work of its age, the painting is in excellent condition due to Van Eyck's glazing method, consisting of numerous layers of glazes. This process imparted intense color as well as long-term durability.

Jan van Eyck's paintings truly capitalized on this new medium.  The Arnolfini Marriage provides a fine example of the artist’s skill. Particularly notable examples of Van Eyck’s artistic proficiency include the reflective amber beads around the mirror and the cherry tree in the distance. The artist probably used a magnifying glass to paint these minute details.

Van Eyck’s convex mirror is equally astounding, admired, and debated in equal measure.  The spherical reflections are perfectly rendered, except for slight distortions on the window and the bottom of the woman’s dress.

Indeed, the detail is so precise that scenes from the Passion of Christ are visible in the small medallions on the mirror. The scenes on Giovanni Arnolfini’s side concern the life of Jesus (suggesting his religious devotion). Near his wife, the images on the right-hand side depict the crucifixion and resurrection.

Some scholars (such as the art historian Erwin Panofsky) believe Jan Van Eyck’s Arnolfini Marriage painting could have formed the marriage contract.

At this time, mirrors were also symbols of purity and the Virgin Mary. Linked to purity and salvation, the vivid green of the woman’s dress also signifies hope for children in marriage. With more worldly concerns in mind, it demonstrates wealth as bright fabrics were costly.

The two other figures are visible in the doorway, adding to the astounding layers of meaning, lending weight to Erwin Panofsky’s theory that the painting is a marriage contract. They are the two witnesses necessary to legalize a marriage, along with Van Eyck’s confirmatory signature.

Further symbolism is the small dog at the bottom of the scene, representing loyalty. The couple’s opulent attire and the room decoration further demonstrate wealth. Lap dogs were expensive in this period, and maybe a wedding gift from husband to wife.

In 1842, The National Gallery purchased the painting for £600. Equivalent to just over £70,000 today, this was a substantial sum. But, befitting its place in the popular imagination, Jan van Eyck’s Giovanni Arnolfini and his wife remain on permanent public display.

The Arnolfini Wedding portrait is a part of our standard catalog of famous art reproductions.