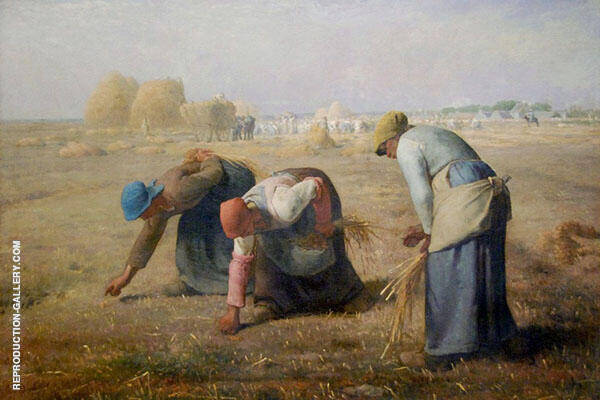 Depicting three peasant women, of all whom are cleaning stray wheat stalks. The painting was completed in around 1857. The Gleaners is one of Millet’s most famous paintings.

Depicting three peasant women gleaning a field for stray stalks of wheat, it sympathetically presents the plight of the French working glasses.

Gleaning is the process of collecting leftover crops from agricultural fields, after harvests are collected. It is a process described in the Bible (for instance in the Book of Ruth), and an activity that became a legal right of the poor in many Christian countries.

Why did Jean-François Millet paint The Gleaners?

Amongst Jean-François Millet artwork, The Gleaners is famous for presenting the lowest ranks of society in a realistic, compassionate manner. Millet aimed to present the harsh reality of rural farming life.

Beyond the hard-working hungry women, the riches of a bountiful harvest are just visible in the sunlit background.

Known as Des Glaneuses in French, the painting originally appeared at the Paris Salon of 1857. Middle and upper-class audiences treated the theme with suspicion.

Given the recent French history of violent revolution and class warfare, one critic described it as a disturbing allusion to “the scaffolds of 1793”. This referred to the “Reign of Terror” organized by the French Revolutionary Tribunal.

At the time of The Gleaners debut, France had just come out of the 1848 French Revolution. Millet’s glorification of the working classes particularly affronted gallery-going audiences.

As well as its socialist message, The Gleaners was also criticized for its size. The painting measures over 84 by 112 centimeters; a considerable scale for art depicting “mere” labor.

Usually, paintings of this size depict religion, royalty or mythological narratives. Given that Millet’s painting represented no such themes, the three “real” women took on monumental proportions. Indeed, one critic complained of the women’s “gigantic pretensions” as well as complaining of their great “ugliness and grossness”.

Why are Jean-François Millet artworks important?

The Gleaners is an important artwork in its own right. It is a shining example of French Realism and offers insights into the everyday life of the French working classes.

Unlike The Gleaners, there is a heroic hope and dignity to the man’s labor. For the three women however, there appears no such redeeming qualities.

These artworks particularly inspired Van Gogh and the post-impressionist movement. Van Gogh once described Millet as “the essential modern painter” who depicted the peasantry rising up from the earth they tended.

Van Gogh employed a similar color palette (with a much thicker application of paint) in The Potato Eaters (1885).

How much is The Gleaners painting worth?

At the Paris Salon of 1857, Millet sold The Gleaners to a British businessman for 3,000 francs. This was a thousand less than he’d hoped, and the artist attempted to keep the low price a secret. Struggling for money at the time, Millet felt he had no other option than to sell the painting.

Whilst the critical reception of Millet’s painting remained largely negative during his lifetime, it became more popular after the artist’s death in 1875. In the subsequent ten years, Jean-François Millet paintings significantly increased in value.

Millet's oil on canvas painting was later owned by the financier Ferdinand Bischoffsheim, but was sold for 300,000 francs in 1889. It was purchased by the Champagne magnate Jeanne-Alexandrine Louise Pommery.

Pommery donated the painting to the Louvre museum in her will, gifting the artwork to the state. It now hangs in the Musée d'Orsay in Paris. The Angelus c1867 is another of Jean-Francois Millet paintings held by the Museum.

The Gleaners 1857
By Jean Francois Millet