All Artists
C
COOLIDGE, Cassius Marcellus
A Friend in Need 1903 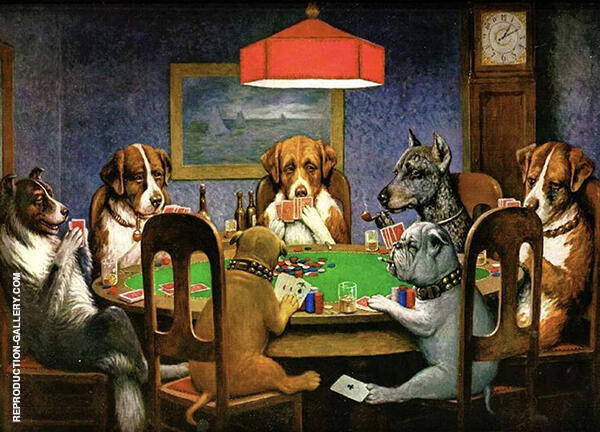 Painting dogs playing poker is not what you’d automatically expect from a nineteenth-century fine artist. Nonetheless, this unusual subject matter has become one of the most famous animal oil paintings on canvas.

The massive wealth created in America during the 1950s led to the rise of the middle class and consumer culture, which led to accusations of the oversaturation of art and consumer goods purely created for popular tastes.

Cassius Marcellus Coolidge A Friend in Need is the most famous painting from his Dogs Playing Poker series. Painted in 1894, it is a precursor to a series of sixteen individual paintings of 1903.

Brown & Bigelow (a publishing company selling various branded products) commissioned the artwork to advertise cigars to the American public. In addition, the company produced thousands of printed copies and gave them to lucky customers.

Most paintings in the series feature dogs with anthropomorphic features. Eleven paintings in total represent canines enjoying a poker night.

Other notable artworks in the series include Poker Sympathy, His Station, and Four Aces and Only a Pair of Deuces.

Known as “Cash” or “Kash” to his friends and family, Coolidge often signed his nineteenth-century paintings (such as Friend in Need) with this name. Indeed, for comedic effect, he often spelled his full name as “Kash Koolidge.”

What is the significance of Dogs Playing Poker?

Many depictions, copies, and re-enactments of dogs playing poker have appeared in films, posters, TV, and theater. Indeed, the art critic Annette Ferrara has described them as “burned into” the American collective subconscious and an icon of kitsch artwork.

Ferrara also describes the continual representations of the painting on almost all kinds of consumer goods. Indeed, the painting is now a true pop culture icon. From Snoop Dogg to the Simpsons and the Disney series of Lilo & Stitch, references are everywhere.

A Friend in Need (and the series as a whole) is significant because it cheekily mirrors the success of middle-class Americans. This social class enjoyed leisure time and expendable income for the first time in history.

Painted decades before George Orwell’s Animal Farm, the painting forces us to question our role in the world. What should the boundaries between “work,” “play,” and “leisure” be? Are we different from the dutiful pets populating our homes in our carefully controlled consumer lives?

In the painting, seven dogs study their cards intently. It’s late at night, with the clock reading ten minutes. Humorous details such as beers and whisky glasses are replete throughout the composition.

The dog’s living room sits firmly in middle-class suburbia with a painting of a pretty maritime scene on the walls and an antique grandfather clock.

The dog in the foreground appears to cheat and proffers (or hides) an ace of clubs with his back leg while the other dogs suspiciously gaze in his direction. The centrally lit scene places the viewers’ attention on the central pile of chips.

How much is A Friend in Need painting worth?

Cassius Marcellus Coolidge paintings are much in demand in the United States of America.

A Friend in Need sold for $658,000 at a 2015 Sotheby’s auction. Although currently, the highest ever price paid for a Coolidge painting, it’s an impressive figure.

In 2006, two other Coolidge paintings (Waterloo and Bold Bluff) also hit the auction room. Used as part of the Brown & Bigelow series, the pair sold at Doyle New York for $590,400.

Coolidge had little formal training as an artist, born into a family of abolitionist Quaker farmers in New York State. Originally from Antwerp (New York), he grew up in Philadelphia. After leaving the family farm, he worked as a pharmacist, sign-paper, and even as a financier and publisher. The young man moved towards art and illustration during his late twenties.

The “comic foreground” is a simple yet effective photographic technique, giving sitters humorously caricatured bodies. Coolidge skillfully drew caricatured bodies on canvas (held in front of a real person), producing a similar effect to the carnival boards where people place their faces into circular openings.

These early experiences help to explain the genre of anthropomorphized dogs, with their captivating mixture of “real” and “imaginary” qualities.

What style is the oil painting A Friend in Need?

Coolidge’s Dogs Playing Poker paintings are prime examples of the “kitsch” genre and are a difficult style to define. As a word borrowed from the German, kitsch generally refers to art, design, and decoration socially perceived as imitative, naïve, or banal.

Despite these more negative connotations, it has also become a watchword of contemporary cool. Adopted by Pop Artists during the 1950s (and present superstar artists such as Jeff Koons), it’s recently experienced a resurgence. Indeed, many Pop Artists such as Roy Lichtenstein, Keith Haring, and Andy Warhol re-appropriated kitsch iconography in a knowingly ironic and humorous fashion.

Most avant-garde artists of the early twentieth century placed themselves in direct opposition to “kitsch.”   The style attracted derision as representative of superficial concerns and material tastes (as opposed to higher standards of beauty and truth).

Originally studied predominantly by German scholars during the 1970s, the topic is now frequently discussed and debated. Widely regarded as a modern phenomenon, it’s thought to originate from the large-scale social and economic changes associated with mass urbanization and the industrial revolution.

While often used in a pejorative sense, kitsch also represents an enduringly positive and popular fine art mode. The overall popularity of artists such as Coolidge is just one example of its longevity and artistic merit.

A Friend in Need 1903
By Cassius Marcellus Coolidge