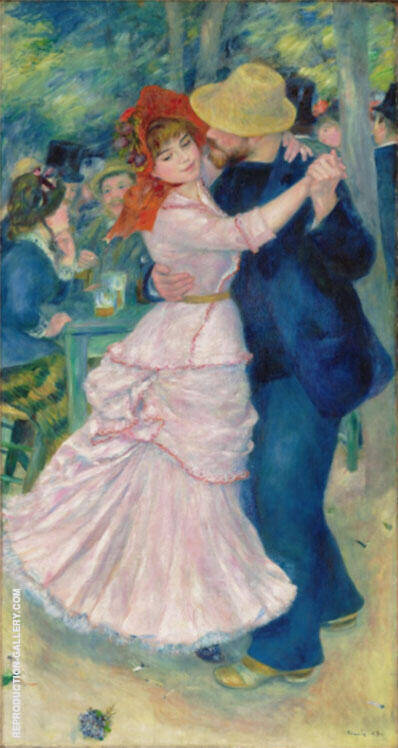 Pierre Auguste Renoir was a leading French Impressionist painter. He created many beautiful artworks during his long and successful career, including several portraits of dancing couples.

One of the most famous Renoir dance paintings was, of course, Dance at Bougival. Today, it is still one of our collection’s most sought-after oil painting reproductions.

But what’s the story behind this iconic work of art?

When was Dance at Bougival painted?

Painted in 1883, Renoir Dance at Bougival shows two dancers lost in their movement. The painting is full of motion and light, with a background of lively al fresco café patrons. The woman’s pink dress swirls around her feet while the man gazes lovingly at his partner.

While Renoir often employed pastel colors, this work is unusual for the woman’s bright red hat. This hat also appears in Dance in the Country (1883).

Some scholars believe the two individuals are Renoir’s friends, Paul Lhote and Suzanne Valadon. Despite this, others think the man could be Hippolyte-Alphonse Fournaise, who also features in Luncheon of the Boating Party (1881).

Where did Pierre Auguste Renoir paint Dance at Bougival?

The town inspired artists such as Claude Monet, Berthe Morisot, Camille Pissarro, and Alfred Sisley. These works include paintings such as Pissarro’s The Seine at Bougival, Monet’s The Bridge at Bougival, and Berthe Morisot’s The Quay at Bougival. Today, the village boasts an “Impressionists Walk” where tourists can visit famous painting spots.

While most Art Historians cite Bougival as the correct location, there is some disagreement. Indeed, Paul Lhote described an exceptionally similar scene in his diary. This dance took place in Montmartre (in Paris itself), casting doubt on the painting’s origins in Bougival.

The Dance at Bougival is one of Renoir’s last Impressionist paintings. Later in his career, Renoir moved to more classical and conservative approaches. He abandoned the fleeting effects of light and expressive brushstrokes that characterized the Impressionist movement.

Nonetheless, this double portrait keeps the Impressionist’s bright color palette with a modern sense of light and movement. It combines Renoir’s interest in formal composition (inspired by the Italian Old Masters) with Impressionist fluidity and scenes of contemporary life.

The work is also an “impression” because Pierre Renoir only produced a few sketches and plans for the painting. He arranged his models “en plein air” and began painting.

Where is the original Dance at Bougival?

The original Pierre Renoir painting now hangs in the Museum of Fine Arts in Boston, USA. It remains one of the 100 most famous paintings of all time. Indeed, the museum describes Renoir’s Dance at Bougival as one of its most “beloved works.”

What are Renoir’s famous Dance paintings?

Renoir produced several famous dance paintings during his career. These creations include three artworks painted for the legendary art dealer Paul Durand-Ruel. As well as Renoir Dance at Bougival, the other two artworks are Dance in the City and Dance in the Country.

All three paintings are incredibly similar. They all depict a single couple dancing in public.

Each picture shares a similar light color palette. In addition, the woman wears a pale dress in all three works. The man dons a dark blue or black suit, often with his face partly obscured.

Renoir completed all three famous Dance paintings between January and April 1883. They combine characteristic Renoir detailing (such as outdoor scenes) with his love of portraiture.

Intriguingly, each portrait also shows a different class of French society. For example, Dance in the City depicts a formal ball attended by the upper classes. Dance at Bougival is a more informal outdoor affair, while Dance in the Country is simply a rural dance.