All Artists
C
CARAVAGGIO
The Beheading of St John the Baptist 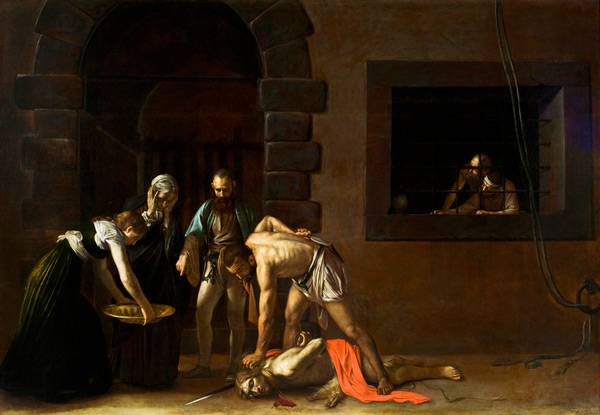 Michelangelo Merisi da Caravaggio, best known simply as “Caravaggio,” was a true master of the Italian Renaissance. He created some of the most famous religious paintings during his creative and tumultuous career.

Born in Milan, Italy, in 1571, Caravaggio lived a short, chaotic, and exciting artistic life. Throughout the 1570s, the plague ravaged many Italian cities. Consequently, the family relocated to the town of Caravaggio in 1576. The young child’s grandparents died from the plague when he was just six years old, and his mother passed away from the disease when he reached his tenth birthday.

Caravaggio’s artistic talents were evident from an early age, however. He commenced an artistic apprenticeship in the studio of Simone Peterzano at the age of twelve. After four years of working as an apprentice, Caravaggio moved to Rome. At this time (the late 1580s), a spate of Italian church buildings meant high demand for high-caliber artists.

What was Caravaggio's style of art?

When Caravaggio commenced his career, the Catholic Church sought paintings as an alternative to Mannerism. They hoped to counter the Protestant reformation with a new, naturalistic style that communicated religion to the masses.

Caravaggio’s style of realistic yet vivid chiaroscuro (focusing on dramatic juxtapositions of light and dark) was perfect for this purpose. Boy Peeling a Fruit, Boy with Basket of Fruit, and Young Sick Bacchus (circa 1593) reflect this early, intensely dramatic style.

During this period, Caravaggio met influential artists and patrons such as the architect Onorio Longhini and the painter Prospero Orsi. They further introduced him into wealthy Roman society.

Primarily a painter of devotional art, Caravaggio initially focused on scenes from the New Testament. He was a true innovator, prioritizing the mundane, everyday aspects of biblical narratives and transforming them to new heights.

Controversially, Caravaggio often used street people as models for figures such as Mary and the Apostles. Heightened by theatrical lighting and shallow pictorial space, it launched a new age of realism in religious art.

Due to their shocking nature, the church rejected many early Caravaggio artworks. Indeed, rumors abounded that Caravaggio used the body of a dead prostitute (drowned in the Tiber) for Mary in Death of the Virgin (1601). Interestingly, however, the painting was later purchased by the Duke of Mantua on the recommendation of the great Peter Paul Rubens (painter of The Conversion of St Paul).

What is Caravaggio most known for?

Despite (or because of) these scandals, Caravaggio’s fame and reputation quickly grew. Caravaggio art is best known for his dramatic lighting and rich, jewel-toned coloring. Caravaggio paintings synthesized theatrical composition with biblical narratives as part of the Catholic counter reformation.

One need only consider paintings such as Judith Beheading Holofernes (1599) and The Incredulity of St Thomas (1602) to understand the intense skill and drama that made Caravaggio’s name. Indeed, each composition told a story that believers of all social echelons could understand.

Nonetheless, many early paintings represented scenes from everyday life. This included paintings such as The Cardsharps (1594) and The Fortune Teller (1598). The fantastic detailing and rich psychological insight of these works impressed a prominent collector, Cardinal Francesco Del Monte. He was one of Caravaggio’s first patrons, providing him with lodgings and multiple introductions.

What is Caravaggio's masterpiece?

These social connections enabled by Cardinal Del Monte led to one of Caravaggio’s most important commissions. This consisted of two paintings for the Contarelli Chapel in Rome. Today, they are his shining masterpieces…

These two paintings are The Calling of Saint Matthew and The Martyrdom of Saint Matthew. Painted between 1599 and 1600, they remain in the Church of San Luigi dei Francesi to this day. Widely praised even at the time, Caravaggio never struggled for commissions after this date.

Even in the present day, Caravaggio’s artwork retains its emotional power. Pope Francis spoke of his frequent visits to The Calling of Saint Matthew, simply commenting, “this is me.” Even the Pope saw himself in Caravaggio’s art as a “sinner on whom the Lord has turned his gaze.”

As well as the works in the Contarelli Chapel, Caravaggio’s Betrayal of Christ, Entombment of Christ (1602-3), and The Seven Works of Mercy (1606) are also acknowledged as yet more astounding religious paintings.

Are Michelangelo and Caravaggio the same person?

This is a common question, and it’s worthwhile noting that Caravaggio’s real name was Michelangelo Merisi. However, he was a completely different individual from the artist Michelangelo Buonarroti (known simply as Michelangelo).

While Michelangelo largely avoided public scandal, Caravaggio was known for his quick temper, many lovers, and frequent brawls. He committed many minor crimes, such as swearing at a constable, cutting a hole in his landlord’s ceiling (to allow light for painting), and carrying a sword without a license.

More severe crimes included scarring a guard during a fight and throwing a plate directly in the face of a waiter. The incident occurred because Caravaggio believed his undercooked artichokes were an insult.

Why was Caravaggio exiled?

Ultimately, Caravaggio’s fiery temper was his downfall. He killed Ranuccio Tomassoni in a duel after Tomassoni insulted a prostitute Caravaggio particularly admired. Scholars speculate the two men also had gambling debts. However, Caravaggio was exiled as punishment for Tomassoni’s murder at the risk of execution.

Caravaggio consequently fled Rome (headed to Naples), where he hid with multiple noble families and patrons such as the Sforzas and the Colonnas. He continued working during his exile, traveling to Malta and Sicily. Indeed, during this period, Caravaggio painted several masterpieces, including The Beheading of Saint John the Baptist and Saint Jerome Writing (the only painting Caravaggio ever signed).

Despite this, Caravaggio fled Malta after yet another fight. He seriously wounded a high-ranking knight yet escaped prison. He traveled to Sicily (under the protection of an old artist friend, Mario Minniti) and painted the Adoration of the Shepherds on the picturesque Italian island.

Nonetheless, Caravaggio lived in constant fear and paranoia. It proved well-founded after a group of men attacked him (likely in retaliation for the attack on the Maltese knight). This left Caravaggio’s face permanently disfigured.

Why was Caravaggio killed?

It’s unknown whether Caravaggio died of natural causes or murder. He died at some point in July 1610 while still attempting to obtain a Papal pardon for the murder of Ranuccio Tomassoni.

The renowned artist probably died from syphilis, malaria, or brucellosis. Nonetheless, some art historians posit Caravaggio died in retribution for either Tomassoni or the knight he attacked in Malta.

However, recent discoveries (made in 2010) identified bones likely of Caravaggio. They revealed toxic levels of lead, probably absorbed from the paints he worked with. Caravaggio’s painting style was incredibly physical and erratic, supporting this theory. Furthermore, unpredictable and violent behavior is also a common symptom of lead poisoning.

Whatever the cause of death, Caravaggio died at the age of 38 in Spain. He was en route to the Pope after hearing a pardon was due.

What was Caravaggio's influence?

Caravaggio paintings greatly influenced the late Renaissance and Baroque art movement. In the words of the art historian Bernard Berenson, “no other Italian painter has exercised so great an influence” on European art.

If you love the stunning art of the Italian Renaissance, explore our collection of museum quality oil paintings on canvas. Whether it’s Caravaggio artworks, religious paintings, or masterpieces from the likes of Leonardo da Vinci, Raphael, or Titian – discover famous oil paintings to enrich your life and your walls.

The Beheading of St John the Baptist
By Caravaggio