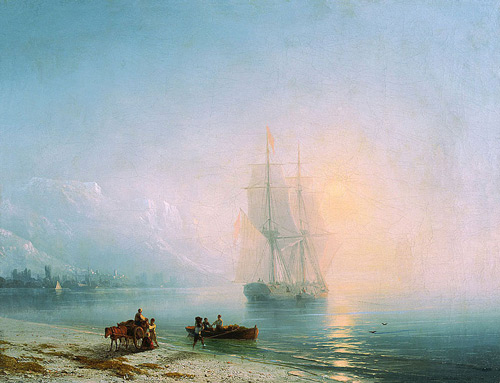 The Russian Romantic artist, Ivan Konstantinovich Aivazovsky, is considered one of the greatest seascape painters of all time.

The Ninth Wave 1850 by Ivan Aivazovsky is one of his most famous seascape oil paintings. The Ninth Wave, 1850 is an atmospheric painting which depicts sailors clinging to the wreckage of a ship. In this painting, the debris forms the shape of the cross, which is perhaps a Christian metaphor for salvation from the earthly sin.

Ivan Konstantinovich Aivazovsky was baptized as Hovhannes Aivazian. He was born on July 29th, 1817 in the Crimean Port of Feodosia. Aivazovsky was the youngest of three sons. He enjoyed a happy childhood in a family a house which enjoyed panoramic view of the sea.

Although a small town, Feodosia’s harbor had long held international significance as a Greek, Genoese and later Ottoman and Russian territory. The bustling port, with its many languages, ships and sailors proved a fertile environment for the young Aivazovsky. Indeed, family legend has it that the young Ivan began drawing with charcoal on the family home’s white-washed walls! Ivan Aivazovsky paintings would depict the sea from this moment forward.

Although not rich, Ivan’s Armenian father Konstantin made much of his money as a merchant. This allowed the young Aivazovsky to receive his education at Feodosia's St. Sargis Armenian Church. He took an interest in drawing from a young age and he was encouraged and championed by an architect friend of the family (Jacob Koch).

Jacob Koch showed Ivan Aivazovsky’s drawings to the local Governor, and it was he who funded the young man’s studies in Saint Petersburg.

Following his education at the Imperial Academy of Arts in Saint Petersburg, Ivan Aivazovsky travelled to Europe and lived briefly in Italy in the early 1840s. Early oil paintings on canvas from this period include The Azure Grotto, Naples, 1841 and the Bay of Naples at Moonlight, 1842.

Aivazovsky travelled to Venice via Berlin and Vienna. He visited San Lazzaro degli Armeni, with it's large Armenian Catholic cumminity. Whilst there, he became familiar with Armenian art, a theme which is particularly in later Ivan Aivazovsky paintings: The Valley of Mount Ararat 1882.

Ivan Aivazovsky described the great Italian museums as a “second academy” for him. He launched several successful exhibitions during his time in Europe – and was awarded a gold medal by Pope Gregory XVI and the French Royal Academy.

He returned to Russia in 1844 and was appointed the main painter of the Russian Navy “to paint seascapes, coastal scenes and naval battles.” Aviazovsky’s oil painting, The Battle in the Chios 1848 depicts the Naval battle of 1770.

A year after returning to Russia, Aivazovsky re-settled in his hometown of Feodosia. He built a small house and studio and kept a close circle of friends. Whilst it gave the artist great personal happiness, this move was widely credited with removing Aivazovsky from some of the more avant-garde artistic circles working in Russia at this time. His determination to stick to the “traditional” Romantic style left Aivazovsky open to criticism throughout his later career.

In 1848, Aivazovsky married and English Governess, Julia Graves. They divorced in 1877 but the marriage produced four daughters.

In 1851, Aizavosky travelled with the Russian emperor Nicholas I, where they sailed to Sevastopol, participating in military maneuvers. At the onset of the Crimean War two years later, Aivazovsky returned to Sevastopol to paint battle scenes.

He later travelled all over Europe, winning awards and honors in Paris (the Legion of Honor), Constantinople (Order of the Medjidie) and becoming a member of the Moscow Art Society.

Ivan Aivazovsky continued to travel throughout the 1860s and 1880s. During this period he painted major events such as the Greek resistance against the Turks with seascape oil paintings such as Brig Mercury Attacked by Two Turkish Ships, 1892. Aivazovsky was the first artist to paint the Suez Canal at its opening in 1869.

Many international accolades continued to follow throughout the 1870s and 1880s, including an Actual Civil Councilor (the fourth highest civilian rank in Russia) and an honorary member of Stuttgart's Royal Academy of Fine Arts in 1878.

In 1887, as part of a jubilee celebration of his career, Aivazovsky was awarded honorary membership in the Imperial Academy of Fine Arts. He held a dinner for 150 friends to celebrate, gifting a set of miniature Ivan Aivazovsky paintings to guests – each set into a studio photograph of Aivazovsky at work.

Aivazovsky was one of the most prolific artists of all time; during his 60-year career, he produced over 6,000 paintings with 55 solo exhibitions.

Aivazovsky's later oil paintings also included dramatic scenes, but these were generally created on a much bigger scale. Aivazovsky's paintings, portraying the continual struggle between man and the elements are discovered in paintings such as The Rainbow, 1873 and the aptly titled oil painting, Disaster which was completed in 1898.  Whilst many of his paintings depict wrecks and storms, the warm pastel colors of Ivan Aivazovsky paintings such as The Rainbow, 1873 seemingly refer to his ultimate faith in God and salvation – even amidst the threats of rising waves and collapsing masts.

Aivazovsky kept up his prolific travels in later life, travelling to Paris with his wife and later visiting the Niagara Falls in 1892.

Aivazovsky was deeply affected by the Hamidian massacres in the Armenian-inhabited areas of the Ottoman Empire during the period 1894 and 1896. His paintings incude several works depicting the The Armenian Massacres at Trebizond, 1895. He even threw the medals given to him by the Ottoman Sultan into the sea and told the Turkish consul in Feodosia:

“Tell your bloodthirsty master that I've thrown away all the medals given to me, here are their ribbons, send it to him and if he wants, he can throw them into the seas painted by me.”

Aivazovsky spent his final years in Feodosia, and died on 2 May 1900. This quote from Movses Khorenatsi's History of Armenia is engraved on his tombstone: “Born as a mortal, left the immortal memory of himself.”

Aivazovsky remains highly popular in Russia and further afield to this day. In a fitting tribute, the saying “worthy of Aivazovsky’s brush” was used by Anton Chekov in Uncle Vanya to describe something particularly beautiful.