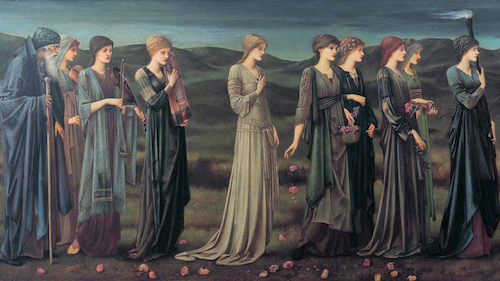 Sir Edward Coley Burne-Jones was Pre-Raphaelite artist known for his painting and collaboration with William Morris, of the Arts and Crafts Movement. Burne-Jones was also involved in the design of stained glass, and many of his stained glass windows are still in existence in churches and cathedrals in the UK. His early paintings show the significant influence of Dante Gabriel Rossetti. Burne-Jones studied at Oxford University, where he met both William Morris and Rossetti. Burne-Jones became a famous and well respected artist of his day and accepted a title, from Prime Minister William Gladstone, as a baronet.

Paintings by Sir Edward are acknowledged to have inspired the French symbolist movement.

The Wedding of Psyche 1895
By Sir Edward Coley Burne-Jones