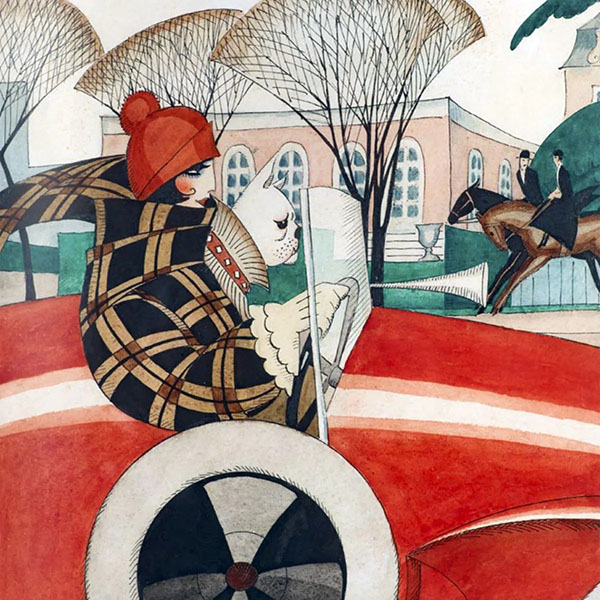 Gerda Marie Frederikke Wegener was an innovative Danish painter and illustrator, particularly famed for her groundbreaking transgender art. As an artist who consistently pushed societal boundaries, Gerda Wegener was revolutionary in her life and in her famous oil paintings.

Here’s a brief biography encompassing her youth, relationship with Lili Elbe, and later life, as well as an introduction to some of the fascinating paintings by Gerda Wegener.

Where is Gerda Wegener from?

Born in Hammelev, Denmark in 1886, Gerda’s parents were Justine (née Østerberg) and Emil Gottlieb. As a vicar in Denmark’s Lutheran church, her father was relatively conservative and traditional. She grew up near Grenaa, a town on the east coast of Jutland.

Named Gerda Gottlieb, she had three siblings. Sadly, Gerda was the only child who survived into adulthood. She loved art, however, and pursued creative interests from a young age. Gerda’s family was supportive of these early endeavors and enabled her early move to Copenhagen.

Gerda met Einar Wegener (later known as Lili Elbe) at art school in Copenhagen. Already working as a landscape painter, he was three years her senior. After a whirlwind romance, the pair married in 1904 when she was nineteen.

It was a happy and transformative time for Gerda, who enjoyed living amongst dancers, actors, and artists in Denmark’s capital city. She loved art’s performative aspects and painted heavily stylized figures who actively and provocatively engaged her viewers.

During this time, Einar Wegener’s landscapes were gaining in popularity. In contrast, the largely conservative Copenhagen art public often criticized Wegener’s erotically charged portraits. For instance, the Charlottenburg Art Gallery displayed her work in 1904, but she received little positive attention.

After Gerda’s graduation in 1907, her art gradually grew in popularity outside of Denmark. Indeed, the largely conservative Danish society struggled with a young woman so openly declaring her sexual imagination and desires.

Consequently, the couple traveled extensively. They settled in Paris in 1912, where Gerda discovered artistic and commercial success. The city of light and romance gave both Gerda and Einar the ability to find themselves creatively and personally.

Gerda was deeply supportive of Einar (or Lili), and Einar supported Gerda in turn. In fact, Einar often sat for Gerda as a model, resulting in the famous series of Gerda Wegener Lili paintings. This includes Portrait of Lili Elbe, a version with a Green Feather Fan, and erotically charged creations such as Lily Hot Summer (1924).

Einar first posed in 1904, after one of Gerda’s regular models missed a sitting. As early examples of transgender art, they’re still amongst Wegener’s most revered paintings. At the time, they provoked, scandalized, and excited equally. These emotional reactions increased when the Parisian art public discovered (in 1913) that Einar Wegener was Lili Elbe.

With growing success, Wegener focused on supporting his wife and her career. His bohemian lifestyle was also broadly accepted in Paris, compared with earlier disapproval in Denmark. During this time, he wore female clothing and fully adopted a female name and persona. Gerda Wegener loved painting Lili Elbe; she painted her with beautiful large eyes draped in the latest, most fashionable clothing.

What style are Gerda Wegener paintings?

Aside from their sensual content, paintings by Gerda Wegener took inspiration from Art Nouveau and Art Deco. Her contemporary portraits showed women participating in everyday cultural activities such as dancing (The Ballerina Ulla Poulsen), driving (The Sports Car), and socializing outdoors (Three Women Under an Umbrella).

In addition to women (and paintings of Lili Elbe), Wegener further pushed gender identities by depicting men with slender bodies and soft outlines.

As well as painting, Gerda Wegener’s fashion illustration career also flourished in Paris. She produced Art Deco paintings and illustrations for the likes of Fantasio, La Vie Parisienne, and Vogue. They also appeared in newspapers and magazines (often with an anti-German slant during World War Two), such as Le Matin and La Baïonnette.

In the 1920s, Gerda Wegener art was featured in the Paris World Fair, the Salon d’Automne, Salon Humoristes, and Salon Indépendants. Arguably, 1925 (the year of the World Fair) was her commercial height. She was awarded two gold medals and a bronze at the prestigious Paris World Fair.

Gerda Wegener deeply loved and supported her husband. She backed Einar in his transition to Lili Elbe, and Lili helped Wegener’s art and career.

The exact nature of their romantic relationship remains unknown. Still, many scholars believe Wegener was at least bisexual due to her depiction of lesbian lovers in paintings such as A Summer Day (1927) and Les Femmes Fatales (1933).

In 1930, Elbe had one of the first-ever sex reassignment surgeries. Throughout multiple pioneering operations (taking place in Berlin and Dresden), Lili aimed to become a woman (including reproductive organs) completely. Gerda supported Lili through these surgeries and even funded much of her medical bills.

Sadly though, Elbe died in 1931 from complications resulting from her final surgery. This was an attempt to create a working uterus. She’d started a relationship with a French art dealer, with whom she intended to marry and start a family.

When did Gerda Wegener die?

In a sad ending for both partners, Gerda Wegener’s second marriage didn’t last long. She returned to Denmark in 1938. By this point, her paintings fell out of fashion, and she died penniless and alone. She died aged fifty-four on 28 July 1940, in Frederiksberg, Denmark.

Auctioned after her death, Wegener’s estate was small. A small, single obituary appeared in the local paper. She’d held one last exhibition in 1939, but by this point (and the onset of the Second World War), her artwork seemed distinctly out-of-touch. Pure, clean abstract forms (the opposite of Wegener’s Art Deco paintings) were now in vogue.

Buried alone at Solbjerg Park cemetery in Copenhagen, Gerda’s work fell into relative obscurity until recent media interest and Hollywood films. Indeed, The Danish Girl (released in 2015) takes its name from a fictionalized novel and a Gerda Wegener Lili Elbe painting of the same name.

If you love the striking beauty of Gerda Wegener paintings, explore our extensive collection of her most famous oil paintings. Whether it’s her pioneering Art Deco artworks, Lili Elbe paintings, or fascinating representations of European early-twentieth-century life, discover art to enrich your life and your walls. 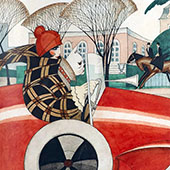 The Sports Car
By Gerda Wegener