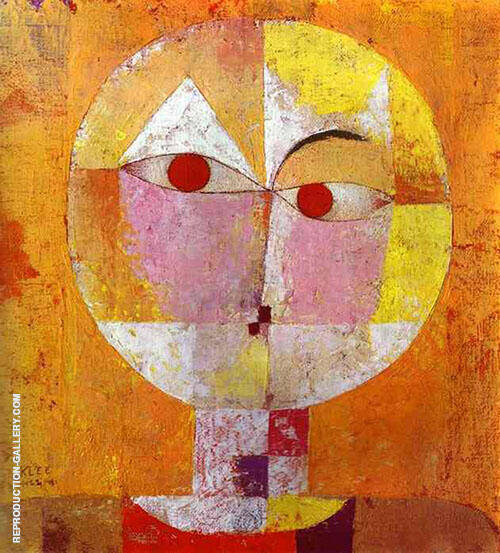 Painted in 1922, Senecio by Paul Klee is a fascinating example of cubist and expressionist art.

What is the Meaning of this painting?

Otherwise referred to as Head of a Man Going Senile, the painting represents a round face split up into squares of color. The eyes gaze inquiringly with one eyebrow raised while the figure appears to slowly morph into (or appear from) the bright orange and yellow background.

As the name suggests, the painting references themes of aging and senility. The flat geometric, brightly colored squares could reference a mask or the patches on a harlequin’s outfit.

Linking to the fears we all have about growing older and losing our mental capacities and vigor, it’s a fascinating portrait. Indeed, the painting's title draws out the connections between mask-wearing and aging. Senecio means “Old Man” in Latin and was also a well-known performer.

The figure’s raised eyebrow suggests although the mask of senility is creeping in, the man’s intelligence and individuality still shine through.

The simplicity of form evident in the painting also touches on Paul Klee’s interest in African tribal masks. This is referenced in other paintings such as Exuberance and Death and Fire.

Why did Paul Klee Paint Senecio?

Paul Klee never wrote explicitly about his reasons for creating Senecio. Amongst paintings by Paul Klee, however, it’s particularly notable for its cubist influence.

As a twentieth-century avant-garde movement, Cubism focused on analyzing and breaking up objects (and people) into abstract forms. While Senecio maintains a single viewpoint, Klee presents several divides and cross-sections within the painting.

These unusual dividing lines encourage viewers to assess the older man from numerous intellectual and visual perspectives. On the one hand, the portrait presents a humorous, wry figure full of inner life. From another perspective, the older man’s round face takes on an innocent, childlike form.

Paul Klee artwork (with Senecio no exception) also intensely investigates color theory. The use of color particularly fascinated the artist, who wrote and lectured on the topic throughout his career.

The work’s joyfulness and brightness (in stark contrast to the darker fears of senility expressed in Senecio) make it one of the most reproduced Paul Klee paintings.

What Medium is Senecio?

Senecio is an oil on canvas painting mounted on a panel.

Amongst paintings of abstract faces, it’s particularly expressive. Indeed, Paul Klee’s expert use of lines and ambiguous shapes demonstrates his skill in creating compositions from simple graphic elements. He once claimed these elements were “set in motion” by the artist’s mind.

While the paint initially appears haphazardly scraped onto the canvas, Klee carefully planned every detail of his color and lines. The geometric methods used in Senecio make it exceptionally well-respected amongst artists today.

Where is Paul Klee Senecio?

The painting currently hangs in the Kunstmuseum. Based in Basel, Switzerland, this museum boasts the oldest public art collection in the entire world. It’s famed as the most important museum in Switzerland, with heritage extending back to a Hans Holbein purchase in 1661

As well to leading Renaissance masterpieces, the museum collection holds many artworks from the Dutch Golden Age, including the work of Peter Paul Rubens and Rembrandt van Rijn.

In addition to famous nineteenth-century impressionist works, the museum’s twentieth-century collection mainly focuses on the cubist movement. As well as a unique collection of paintings by Paul Klee, the museum holds artwork by Picasso, Georges Braque, and Juan Gris.

Oil painting reproductions of abstract paintings by Paul Klee are included in our large selection of 20th Century replica art. 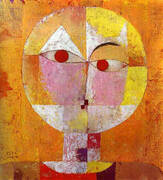