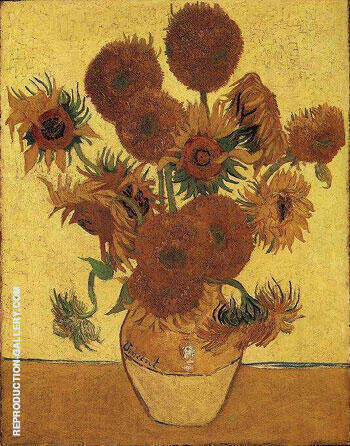 Vase with Fifteen Sunflowers is one of van Gogh's paintings, completed during his time in Arles.

Sunflowers (or Tournesols in French) is the title of two Van Gogh still life series.

Of the artists, Arles paintings, the most famous are his Sunflowers in Vase creations.

Today, he is famous worldwide as a leading Dutch post-impressionist painter.

During his lifetime, though, he struggled financially and only sold one painting. His brother Theo supported him financially. The Sunflower paintings series only gained critical acclaim after Van Gogh’s tragic suicide.

Van Gogh painted his Vase with Fifteen Sunflowers in 1888. The oil painting was created soon after his move from the busy Paris Streets to southern France.  Here, van Gogh captured the sunshine and bright colors of the South of France.

During this period, van Gogh created many colorful paintings. Around this time, he invited his artist friend, Paul Gauguin, to join him. The artist hoped that the two painters would set up an artist’s colony in the town of Arles. Waiting for Gauguin’s arrival, Van Gogh started a series of paintings. This series was Sunflowers, created to adorn Gauguin’s bedroom.

Writing to his brother Theo in August 1888, Van Gogh said it “won’t surprise you” to learn of his exclusive focus on “large sunflowers”. He described how these works would be “decoration for the studio”, which he hoped to cover in “nothing but large flowers”.

Interestingly, Van Gogh also created an earlier series of Sunflower paintings. Still living in Paris at the time, these artworks show sunflowers lying on the ground (instead of arranged in a vase).

Where is van Gogh's Sunflowers painting?

Sunflower paintings held special significance for the artist.  Indeed he wrote to his brother telling how they represented “gratitude”.

The artist Paul Gauguin particularly adored these paintings, describing them as “completely Vincent,” and later asked for one of the Sunflower paintings as a gift.
Van Gogh was reluctant to part with any of his precious creations and created two rough copies, one of which is in the Van Gogh Museum in Amsterdam.

Describing the Sunflower series of paintings to Theo, Van Gogh wrote how they “grew in richness” the more you looked at them. He was particularly pleased to report that Gauguin liked them “extraordinarily”.

What is the value of van Gogh's famous painting?

In 1987, an anonymous buyer paid $39.85 million for Sunflowers. With inflation, this equals over $93 million today.

At the time, this price more than tripled earlier records for paintings at auction. It’s even more impressive given that the struggling artist initially hoped to sell the image for just $125. Sadly, Van Gogh was unsuccessful in this attempt during his lifetime.

How many Sunflowers in Vase paintings did Van Gogh paint?

Van Gogh painted his Sunflower oil paintings during his time in Arles. Between 1888 and 1889, he painted five large colorful paintings, each with sunflowers in a vase. Every painting incorporates three shades of yellow as its primary tones.

The artist treated these works as a color study. He used new yellow pigments (only recently invented) to make his colors as vivid as possible. His colorful wall art demonstrates that a single tone can create a dynamic image without losing interest or definition.

Showing sunflowers in all stages of life (from full bloom to decay), they also represent an entire life cycle in one image. Fifteen Sunflowers is a famous art reproduction,

Given its unrivaled status in the popular imagination, Vase with Fifteen Sunflowers is still one of our collection’s most sought-after Van Gogh oil paintings. As one of the top 100 famous paintings, it’s an iconic example of post-impressionism painting.

There are many paintings of Sunflowers, and you can see them all in our curated collection of Flower Paintings.

Enjoy discovering hundreds of van Gogh reproductions that you can proudly display in your office or home.