All Artists
K
KLIMT, Gustav
Portrait of Adele Bloch-Bauer I 1907 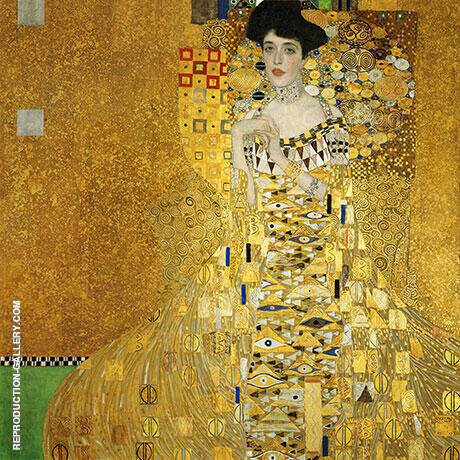 Portrait of Adele Bloch-Bauer  (also known as The Lady in Gold or Woman in Gold) is one of Gustav Klimt’s true masterpieces.  It was completed between 1903 and 1907

Why did Gustav Klimt paint the Portrait of Adele Bloch-Bauer?

Commissioned by Ferdinand Bloch-Bauer, Klimt painted the portrait to honor the Jewish banker and sugar producer’s wife. The Bloch-Bauer family were patrons of the artist, owning several Gustav Klimt paintings.

Amongst Gustav Klimt artworks, the painting represents the culmination of the artist’s “Golden Phase.” He drew more than a hundred preparatory sketches for the portrait, taking inspiration from Byzantine mosaics and religious iconography. Klimt created the work itself with an elaborate process of layering gold and silver leaf. His characteristic ornamental motifs were later added in relief.

Despite the lengthy preparations, critics reacted with barely veiled contempt when first exhibited at the Mannheim International Art Show in 1907. “Bizarre,” “grotesque,” and “vulgar” were just some of the words describing the piece.

Critics primarily disapproved of the sitter’s loss of individuality amidst the sea of gold. One commentator (Eduard Pötzl) complained it was “more brass than Bloch.”

What is the history of the painting of Adele Bloch-Bauer

Bloch-Bauer died in 1925 and stipulated her portraits should be donated to the Österreichische Galerie Belvedere, Vienna. Even though her husband technically owned the oil paintings, he agreed in principle.

Like many other Gustav Klimt famous paintings, the portrait doesn’t have a straightforward history, however. Stolen in 1941 by the Nazis, it became a possession of the German state. Ferdinand himself successfully fled Vienna, making his way to Switzerland.

A tax evasion charge later arose against Ferdinand, with the sale of his artworks used to offset the claim. In a strange twist of fate, the German lawyers re-donated the portrait to the Österreichische Galerie Belvedere. This was due to Adele’s written stipulations in her will.

On his death in 1945, Ferdinand bequeathed his entire estate to his nephews and nieces. They subsequently launched legal challenges against the gallery, attempting to reclaim artworks stolen during the Second World War. After a lengthy, seven-year legal battle, the gallery returned the paintings (including several Gustav Klimt artworks).

The family sold the Portrait of Adele Bloch-Bauer in 2006. Purchased for $135 million by the legendary art collector Ronald Lauder, it then traveled to America. The portrait now hangs in the Neue Galerie (a museum of early twentieth-century German and Austrian art) in New York City.

What was the Vienna Secessionist Movement?

Gustav Klimt was one of the founding members (and President) of the Vienna Secession, founded in 1897. The Secessionist Movement represented artists hoping to break free from the classical conservatism and stifling rules of the Viennese Künstlerhaus. Together, the artists resigned en-masse from the Association of Austrian Artists.

It was partly due to this reputation as a painter of decadence, opulence, and beauty that Klimt became the portrait painter de jour for wealthy bourgeois families. In the early 1900s, rising industrialism created a new class of wealthy business owners open to innovative artistic approaches.

Both The Kiss, 1907, and Portrait of Adele Bloch Bauer are acknowledged as two of the most beautiful paintings by Gustav Klimt.

The Portrait of Adele-Bloch Bauer perfectly represents the confluence of these historical factors and is one of the most beautiful portraits of all time.

Paintings by Gustav Klimt are firm favorites with our customers, and the use of real gold paint and gold leaf in our oil painting reproductions makes them a stunning centerpiece in any room. 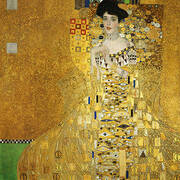 Portrait of Adele Bloch-Bauer I 1907
By Gustav Klimt