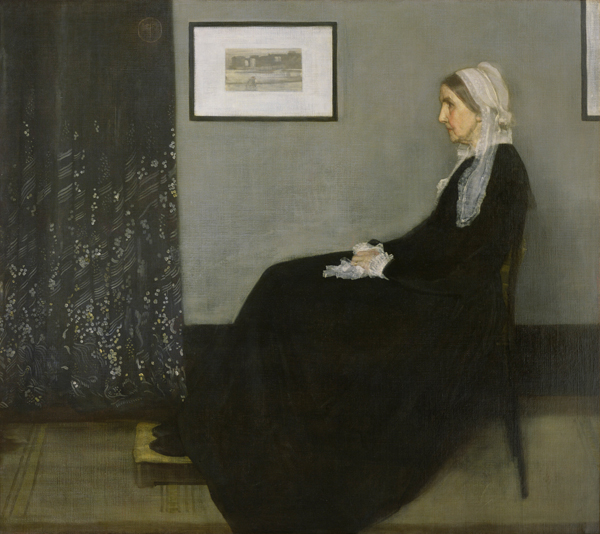 Whistler’s Mother painting by James Abbott McNeill Whistler is one of the most famous American artworks. Despite its title, “Arrangement in Grey and Black No. 1,” the painting is better known by its informal epithet being painted in 1871.

The work is a true American cultural icon created in oils on canvas. Some have even gone as far as declaring it a Victorian Mona Lisa.

What does Whistler’s famous painting represent?

Several (unverified) reports cite Anna Whistler only posed for her son because his original model failed to arrive. He’d planned a standing portrait; however, given her age (67 at the time), Anna was uncomfortable standing for long periods. Whistler consequently provided the now-famous chair.

Akin to James McNeill Whistler’s Nocturne in Blue and Gold, Arrangement in Grey and Black exemplifies the artist’s fascination with color. Painted with Whistler’s characteristically liquid paint, scraped over the canvas in long sweeping strokes, the gray wall takes a form all of its own. Fascinated by Japanese culture and calligraphy techniques, the curtain’s decorative pattern also represents these stylistic experiments.

Why is this painting so important?

This seemingly insignificant debate on terminology was necessary, as Whistler added the explanatory note “portrait of the painter’s mother.”

As a result of this near-rejection, though, Whistler never submitted paintings to the Academy again. A great supporter of “art for art’s sake,” the continued focus on the sitter's identity particularly vexed Whistler.

Despite this, the Scottish historian and philosopher Thomas Carlyle was particularly impressed by the work. He resultantly sat for the artist, leading to Arrangement in Gray and Black, No. 2 (1872). Building on the first arrangement, this painting utilized a similarly muted color palette and formal seated position.

Where is the original Whistler’s Mother oil painting?

The painting features Anna McNeill Whistler, posing at the artist’s home in Cheyne Walk, Chelsea. Whistler moved to London in 1863  sharing his home and studio with his mother. Known as the White House, the massive costs of building this residence (alongside an expensive court case) almost bankrupted Whistler.

In terms of the artwork itself, the painting currently hangs in the Musée d'Orsay in Paris. Acquired in 1891 by the Musée du Luxembourg, it is a rare example of important James McNeill Whistler paintings held outside America.

The sale vindicated Whistler in light of his previous rejection by the British art scene. Indeed, the artist wrote a letter to a friend describing his treatment with “deference and respect” on the continent. Whistler described it as a “tremendous slap in the face” to the “Academy and the rest.”