All Artists
M
MANET, Edouard
A Bar at the Folies Bergere c1881 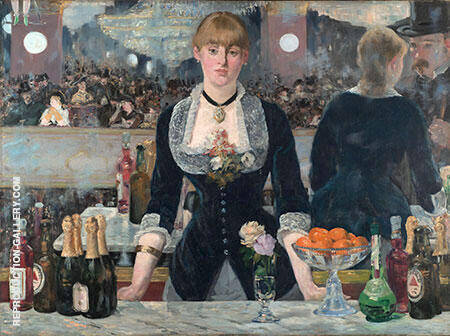 Edouard Manet A Bar at the Folies Bergère

A bar at the folies bergère depicts a woman staring directly at the viewer and appears as just another item on display. Amongst the riches of champagne, oranges, peppermint liqueur, and British Bass Pale Ale, she wearily returns our gaze. Unfortunately, the inclusion of oranges also hints at prostitution, a common device employed in paintings by Edouard Manet.

In the background, a fashionable bar crowd is visible. Carousing and socializing, they watch musical, and circus acts, frequent entertainment in high-society café culture. Indeed, an acrobat’s feet are just visible at the top-left of the painting.

The bar only opened a decade before Manet’s painting. Part of Baron Haussmann’s grand renovation of medieval Paris, the building’s chandeliers and well-dressed clientele demonstrate its appeal to the newly wealthy middle classes.

Despite the bar’s novelty, the institution quickly became a popular music venue in Parisian society. Manet frequently visited the bar with friends, making numerous sketches of its beautiful surroundings.

Who is the woman in Manet's famous painting?

The woman in A Bar at the Folies Bergère was a waitress named Suzon. She worked at the bar but agreed to pose for Manet in his studio.

Her enigmatic expression confused critics at the time, some accusing her of surliness, boredom, or resembling a cardboard cut-out. Some even claimed there was no emotion at all.

Despite this disagreement, her expression is even more fascinating when considering the mysterious man in the mirror. The barmaid interacts with this male customer, who could represent Manet himself.

Indeed, the artist draws our attention by playing with a traditional artistic perspective, shifting the mirror view to the right of where we’d expect.

Mortally ill at the time he painted the Folies Bergère, the painting forms the artist’s swansong. The disorienting scene perhaps represents his fears of losing the café culture he loved.

However, the mirror could also reference Diego Velázquez’s Las Meninas (which features a mirror reflecting the Spanish King and Queen in the background). Manet particularly admired Velázquez and often discussed his work.

What type of painting is A Bar at the Folies Bergère?

Manet’s Bar at the Folies Bergère is an example of realism and impressionist oil painting.

Despite its frequent association with impressionism, this painting is considered a modernist work. Impressionism relies on many small, expressive, quick, and fleeting brushstrokes. Manet’s Bar at the Folies Bergère conversely utilizes a carefully applied, meticulously thought-through painterly technique.

This realistic, modern treatment reflects a growing artistic self-consciousness. Indeed, the placement of the enormous mirror draws the viewer straight into the artwork itself. It compellingly blurs the boundaries between artists, creators, sitters, barmaids, patrons, and the viewing public.

Now owned by the Courtauld Gallery in London, Manet’s artwork remains one of the greatest realist and French Impressionist paintings.

A Bar at the Folies Bergere c1881
By Edouard Manet