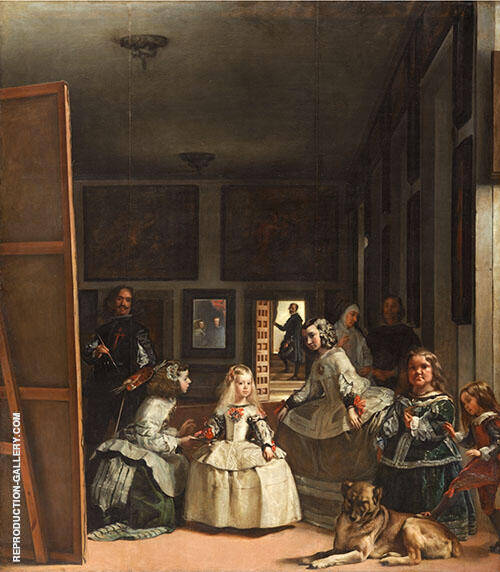 Las Meninas by Diego Velázquez is a masterpiece of the Spanish Golden Age painted in 1656,

The intriguing composition, masterly technique, and unusual nature of the painting make it one of the most discussed group portraits of all time.

Las Meninas is significant not only as a masterpiece of Baroque paintings but also for its famed sitters and complex artistic techniques. The president of the Royal Academy, Sir Thomas Lawrence, once described this particular Velazquez painting as a depiction of true “philosophy or art.”

Velázquez was a Court painter to King Philip IV of Spain and painted many royal family members and courtiers. This oil on canvas painting has particular significance as a historical snapshot, capturing a precise moment in time. Indeed, some figures directly gaze toward the viewer while others appear lost in their world.

Las Meninas translates literally as “the ladies in waiting.”  The paintings details servants, chaperones, and bodyguards, with a pet dog flanking the young princess (or Infanta) Margaret Theresa.  At this time, she was Philip IV’s only surviving child. Positioned just behind them, Velázquez shows himself diligently painting a large-scale work.

A shadowy figure reveals another space beyond the back of the room. Identified as José Nieto Velázquez, this man was head of court tapestries, the Queen’s Chamberlain, and possibly related to Velázquez. Whether he is arriving or leaving the scene has long been a topic of intense scholarly analysis. Whatever the explanation, the effect of luring the viewer deeper into Velázquez’s royal world is inescapable.

Why is Velázquez in this painting?

As Las Meninas ostensibly depicts the royal court, it is reasonable to question why the artist features himself. He is one of the characters staring directly out of the painting, perhaps suggesting his mastery and awareness of the viewer’s reaction.

Unusually for the time, Velázquez became close friends with King Philip IV. The King often sat and watched the artist at work for hours.

After Velázquez’s death, Philip stated, “I am crushed.” Their close relationship explains Velázquez’s boldness in incorporating himself into the royal scene. However, the exact reason for his inclusion is ultimately unknown.

Velázquez wears the red cross of the Order of Santiago on his chest. However, the artist did not receive this until 1659, three years after creating the artwork. Possibly apocryphal stories state the King himself included this detail in the painting.

Why did Velázquez include a mirror in the background of Las Meninas?

Amongst Diego Velázquez's art, Las Meninas is unusual for the large mirror in the background. It’s essential to the meaning of the painting, however, and reflects an image of the Spanish King and Queen themselves. Some argue they are positioned centrally on the canvas, symbolically replacing the viewer within the work.

As Velázquez’s patrons, they were ultimately responsible for his many commissions and high standing in society. In line with this theory, art historians suggest the mirror reflects the canvas and Velázquez is working. Moreover, as the only double portrait of the royal couple, it adds more layers of meaning and interest to the work.

Contrasting with the open doorway (luring the viewer deeper into Velázquez’s world), the mirror pushes the viewer’s attention forwards again, back into the pictorial space. Philip IV rarely allowed his portrait to be painted in later life, making his inclusion in Las Meninas (no matter how small) particularly significant.

Further explaining the mirror, Velázquez may have seen Jan van Eyck’s Arnolfini Marriage (also featuring a masterfully rendered mirror at the back of the room), which hung in Philip IV’s palace at the time. 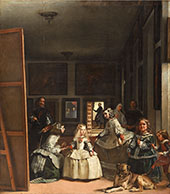