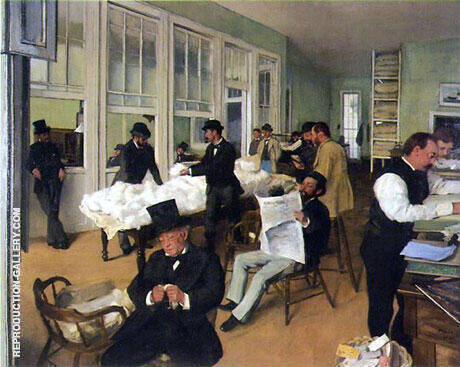 A Cotton Office in New Orleans (1873), also known as The Cotton Exchange and also referred to as “Interior of an Office of Cotton Buyers” and “Portraits in an Office,” This Degas painting provides a fascinating insight into nineteenth-century American life.

Considered one of Degas famous paintings, it is highly unusual with its male figures. Degas is now famed for his delicate female nudes and ballet dancers rather than depictions of white-collar workers.

Why was Edgar Degas in New Orleans?

Degas traveled to New Orleans in 1872 on an extended family visit. His family had strong ties to Creole New Orleans.

Indeed, Degas’ grandfather (on his mother’s side) was born in Port-Au-Prince, Haiti. After the revolution, the family relocated to New Orleans and began trading as cotton exporters.

Of course, this business venture explains the subject matter of Degas’ painting. Degas spent a significant amount of time at the office. He helped with mail and read the newspaper while listening to his uncle and brother’s business conversations.

The result is an iconic representation of the New Orleans Cotton Exchange, which has since become one of Edgar Degas’ most famous paintings.

What did Degas paint in New Orleans?

In New Orleans, Degas worked on a series of Impressionist oil paintings. Degas' paintings feature family members (such as Estelle Musson) and ballet classes, such as The Rehearsal (c.1873).

Despite this, cotton was the overarching theme. Writing to a fellow impressionist painter James Tissot, Degas commented that in New Orleans, one could speak of “nothing but cotton.”

Degas hoped the painting would appeal to the emerging industrial classes in France and England at the time. He planned to sell the work to a textile manufacturer based in Manchester but was disappointed when the painting lacked appeal.

New Orleans was the USA’s most crucial cotton trading center, with significant links to the slave trade. In addition, the City of New Orleans played an influential role in financing the Confederacy war effort during the American Civil War of the 1860s.

This legacy was still evident in the early 1870s. At this time, newly liberated black farmers were subject to severe racism and oppressive working practices. In addition, both the Musson and Degas families personally owned and profited from enslaved people.

Where is A Cotton Office in New Orleans?

Originally exhibited as part of the 1876 Impressionist Exhibition in Paris, the painting hangs in the Musée des beaux-arts in Pau, France.

As well as his uncle, Degas included his brothers, Musson’s son-in-law (William Bell), and other business partners. The men partake in various business and leisure activities, with René Degas prominently reading a newspaper.

Michel Musson inspects cotton in the foreground, while Achille Degas leans against a window towards the front-left of the composition. William Bell stands near the long central table, encouraging a customer to try the cotton.

The men’s highly fashionable clothing represents the life-cycle of cotton itself. After its transformation into textiles, the painting symbolizes the cotton’s onward journey with the inclusion of a painted steamship at the back of the room.

Despite the importance of The Cotton Exchange, Edgar Degas Ballerina paintings are more widely known. The New Orleans scene (with its skewed perspective and carefully arranged characters) shares many similarities with his ballet scenes.

As well as professional ballet dancers, the artist often portrayed working scenes. Edgar Degas paintings, such as The Laundresses (1884) and Woman Ironing (1887), demonstrate his enduring fascination with labor in all forms.

We have an extensive catalog of oil painting reproductions of Edgar Degas famous paintings.

A Cotton Office in New Orleans 1873
By Edgar Degas