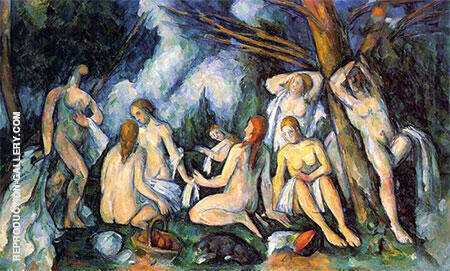 The Large Bathers is one of Cezanne's best-known and most loved oil paintings.

First exhibited in 1906, this large oil on canvas artwork measures over 210 by 250 centimeters and forms part of the Barnes Collection.

Why did Cézanne paint the Large Bathers?

Cezanne Bathers is an important painting; the artist worked on it for seven years. When he died in 1906, Cezanne considered the painting an unfinished work.

With The Bathers, Cézanne aimed to shift art away from populism. He specifically endeavored to create paintings that were initially unexceptional and unappealing to the novice viewer. Instead, Cézanne gave a timeless quality to his paintings. In addition, he encouraged other artists to move away from the fads and stylistic movements that dominated French art at the time.

Of course, the bathers' theme was nothing new. Originating in the Renaissance, these works typically depicted idealized female nude bodies set in the rural countryside.

The facial features are not visible, and their limbs appear alternately shortened or elongated. Unlike the smooth realism of renaissance painting, Cézanne depicts their skin tones with uneven brushstrokes and dabs of vivid color.

Where did Paul Cézanne paint?

None of Paul Cézanne famous paintings depict the light and beauty of the South of France better than The Bathers. Painted in the countryside of Provence, it exudes the area’s unique warmth and charm.

Like much of Paul Cézanne's artwork, the bathers do not appear to occupy three-dimensional space. Instead, the figures appear in a frieze-like composition, and the women's triangular forms add to the overall symmetry of the oil painting. The slanting trees control the composition, stretching towards the sky and moving the viewer’s gaze around the canvas.

Cézanne worked meticulously, building each layer of paint and color slowly and purposefully. His orderly application of color and shade masterfully represents the effects of dappled light on the statuesque nudes. The figures rise from the landscape, as rooted as the trees and rocks.

How many bathers did Cézanne paint?

The Large Bathers is the largest painting in a series of  Cezanne bather paintings. From around 1870 onwards, the theme became an obsession for the artist, who painted at least twelve full-scale oil paintings.

Some of the most famous versions include Three Bathers (1875), The Great Bather (1885), Bathers (1895), and an additional series of Large Bathers compositions.

The inspiration for representing bathing parties developed from Cézanne’s youth. The artist spoke of fond memories of bathing with friends near Aix-en-Provence, in the rolling countryside of the French south coast.