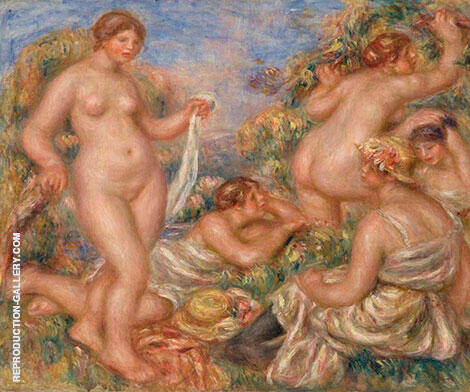 Pierre-Auguste Renoir was born on 25th February 1841 in Limoges. The Renoir family moved to Paris in 1844 where his father made a living as a tailor. Renoir left school in 1854, and showing great skill for drawing he started work as a porcelain painter where his talent as an artist became apparent. However, the company he worked for went bankrupt in 1858 and it was then that Renoir decided he would become a full time artist.

In 1860 Renoir was given permission to copy Old Masters in the Louvre and in 1861 he attended the school of a Swiss art teacher, Gleyer. It was there that Renoir met Claude Monet, Alfred Sisley and Frederic Bazille and began plein air painting. Renoir oil paintings would later form the Impressionist Art Movement with Monet, Sisley and Bazille.

In 1863 Renoir had his first painting accepted by the Official Salon, Esmeralda Dancing with her Goat, but he destroyed the painting after the exhibition.

Renoir and Monet painted together at La Grenouillere 1869, on the river Seine, in 1869, where both artists concentrated on painting the effects of light and water. Their styles and techniques were almost identical at this time, and in 1874 Renoir participated in the first Impressionist Exhibition with his work La Loge 1874, The Theatre Box, alongside Monet, Sisley, Edgar Degas, Camille Pissarro and Berthe Morisot.

In the 1870’s Renoir was successful in finding patrons for his work, and was backed by Caillebotte and the art dealer Durand-Ruel, as well as collectors such as Choquet, the Charpentiers and the Daidets. A famous portrait of this period is Madame Charpentier and Her Children, 1878, which is a fine example of how Renoir adapted the Impressionist landscape style to portraiture painting.

In the 1880’s and following The Luncheon of the Boating Party 1881, Renoir did not like the direction in which his painting style was heading and he went to Italy for fresh inspiration and finding it in the works of Raphael. With a more precise classical approach, Renoir began what is known as his "dry" period, with works such as The Umbrellas in 1883.

Renoir’s The Wave Seascape is on view at the Art Institute of Chicago. The original was painted in 1879 and is available from our art reproductions on canvas catalog.

In his later career, in the 1890’s, Renoir returned to a more generous and flowing style with works such as Young Girls at the Piano 1892, and Sleeping Bather, 1897 which are considered some of his best.

During the early part of the 1900’s Renoir’s health declined severely; he suffered from rheumatism that crippled his fingers, although he managed to carry on working by tying a paint brush to his hand.

The French State recognized his greatness and purchased Madame Georges Charpentier 1877, to hang in the Louvre. Renoir was able to travel to Paris to see it just prior to his death, in December 1919.

Many popular Renoir paintings are held by the Louvre in Paris, The Metropolitan Museum of Art in New York and the National Gallery in London.

In 1990 Renoir’s painting Bal du Moulin de la Galette 1876 sold for $78,000,000. At that time it was the highest price paid for any Impressionist painting and the third most expensive painting of all time.

A beautiful hand-painted Renoir replica painting will grace any room or office.

Renoir reproductions are available in many size options and can be purchased online. View all Renoir paintings here.