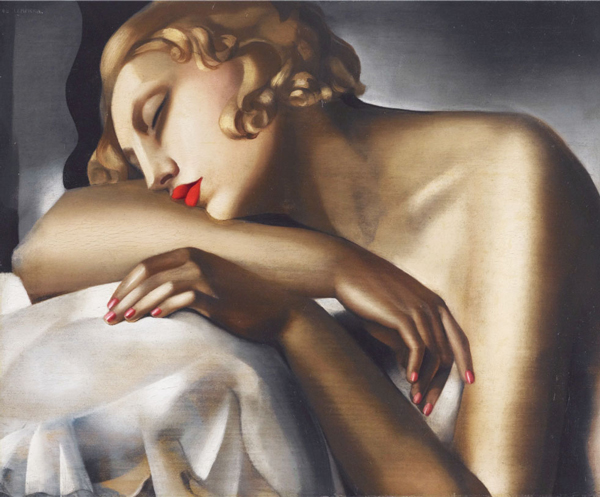 De Lempicka's paintings of women have consequently become some of the most famous Art Deco paintings of the age.

Despite this, the paintings also reference the darker sides of European glamor and the gradual rise of fascist rationalism during the interwar period.

What type of artist was de Lempicka?

This oil painting represents a young woman with ruby red lipstick and scarlet nail varnish asleep in a reclined position. Her crimson lips rest against her forearm while her golden hair gently curls around her serene face. Sensual, bold, and ultra-stylized, it’s a highly suggestive and striking artwork.

Born in Poland but raised in St Petersburg, Russia, Lempicka came to Paris in 1918. She cultivated a glamorous artistic persona here, exhibiting her work in the prestigious Parisian Salon.

Tamara de Lempicka's paintings were thoroughly unique. Unlike the creations of her male contemporaries (often working within the Post-Impressionist and Surrealist movements), Lempicka’s figures are highly controlled, often with a geometric aesthetic.

What inspired her Art Deco paintings?

Every single curve of the woman’s flesh shines with carefully laid brushstrokes. Her hair glows with a metallic sheen as if the figure basks in the light of the moon.

The hyper-realism of the “Neue Sachlichkeit” school was thus a profound influence. Lempicka’s fascination with the Italian Renaissance Old Masters also formed a significant inspiration.

This metallic atmosphere references Lemmoon's lightk with artists from Weimar, Germany. During a trip to Italy with her grandmother, Lempicka discovered famous paintings by Sandro Botticelli, Raphael, and Agnolo Bronzino.

Lempicka also fell in love with the Mannerist style, particularly admiring these painters and their carefully rendered skin tones and stylized compositions.

Tamara de Lempicka frequently depicted strong female nudes in her Art Deco paintings. She returned to this theme throughout her career, most notably with oil paintings such as Andromeda, Reclining Nude, and Beautiful Rafaela.

Tamara de Lempicka's Adam and Eve is a notable religious art completed in 1932. The painting epitomizes the Art Deco period with a background of skyscrapers of the period.

A Private Collector now owns the original de Lempicka artwork. However, in 1994 the painting was sold for almost $2m by Barbra Streisand as part of the sale of her Art Deco and Nouveau Collection.

Each of these paintings demonstrates the classical Art Deco characteristics of stylized symmetry and often elongated forms. Reaching its peak between 1925 and 1935, Art Deco referenced Cubism, Futurism, and the German Bauhaus movement. It exploded in 1920s Paris, just when Tamara de Lempicka’s art gained traction.

Tamara de Lempicka oil painting reproductions form part of our Art Deco catalog of replica paintings.  Eighty-one famous oil paintings are available from our online art catalog.  You will find art deco paintings to grace and elegance to the walls of your home or office.