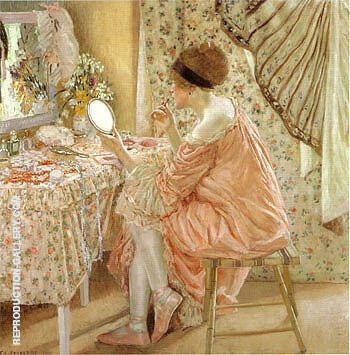 Frederick Carl Frieseke was American Impressionist painter who spent the majority of his life painting in France. Frieseke was an influential member of the Giverny Art school. He trained first at the Art Institute of Chicago, then the Art Student League in New York, and then finally moved to Paris to complete his studies at the Academy Julian. Frieseke’s early paintings were influenced by James McNeil Whistler and his later work by Renoir. He was a neighbor of Claude Monet in Giverny but did not become particularly friendly or influenced by Monet’s style. Later oil paintings by Carl Frieseke show a Post-Impressionist style and he was greatly admired especially by other American artists in France.

In around 1910 Fieseke painted The Yellow Room showing a woman in a Yellow Kimono. This painting is held by the Museum of Fine Arts in Boston.

Are you looking for an Impressionist oil painting? Do take a look at the oil paintings by Carl Frieseke which are sold as museum-quality reproductions. 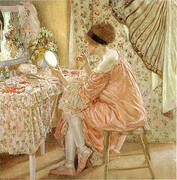 Before Her Appearance La Toilette 1913
By Frederick Carl Frieseke