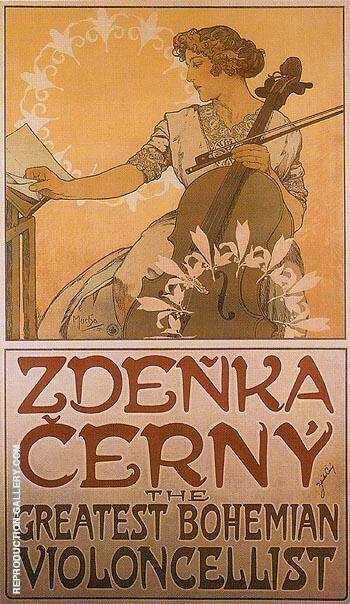 Alphonse Mucha artworks are celebrated the world over for their stunning lines and pioneering Art Nouveau style.

What nationality was Alphonse Mucha?

Alphonse Maria Mucha was born in Ivančice, Moravia on 24 July 1860. Now in the Czech Republic, Moravia was part of the Austrian Empire.

The artist spent his early education in Brünn (today Brno). After this, he worked for a theater scene-painting company based in Vienna, where he honed his creative talents. The business sadly burned down in 1881, after which Mucha returned to Moravia.

Discovering a true passion for the arts, Mucha went on to study in Prague, Munich and Paris during the 1880s. He rose to prominence shortly after completing his studies, due to his works advertising Sarah Bernhardt.

How did Mucha make his posters?

Alphonse Mucha dropped into a print shop in Paris, where entirely by chance they were looking for new poster illustrators. Alphonse Mucha illustrations subsequently advertised theatrical performances featuring the artist.

Utilising the process of lithography, Mucha created his posters with painstaking attention to detail.

One of the earliest of these theatrical posters was Gismonda (1890). As a result of this illustration, Sarah Bernhardt loved his work so much, she signed a six-year contract.

Due to his early work and theater experience in Vienna, Mucha also designed many of Bernhardt’s sets and costumes. As a result of this fame, he went on to design other posters, prints, advertisements and magazine illustrations. Later examples of his poster work include a drawing advertising his own art exhibition in 1921 and the vibrant Sokol Festival Poster (1925).

Why was Alphonse Mucha important?

After his work with Sarah Bernhardt, Mucha went on to create one of his most loved series. This was The Seasons (1896) – a set of four decorative panels.

The series was extremely popular at the time, and lauded as an important artwork ever since. It personifies the seasons as beautiful nymph-like women.

Alphonse Mucha’s Spring depicts the season as an innocent coquettish woman, set against a blossom tree. Her white dress is a symbol of virginity, with her long flowing hair symbolizing new life.

Alphonse Mucha’s Summer continues the quartet with a sultry, flower laden woman resting above a pool with warm sunlight in the background. It reflects the passing of time and the move to adulthood.

Autumn and Winter are fruitful and frosty in turn, with the color, tone and poses reflecting the changing feel of the seasons. Winter is particularly reflective of Japanese influences, with the frozen landscape and woman reminiscent of Hokusai’s masterpieces.

Alphonse Mucha prints are prime examples of Art Nouveau. Beloved for their supple, flowing lines, they perfectly encapsulate the movement.

Clinging, soft neoclassical fabrics and a focus on the female figure further present women as an ornamental thing of beauty. This was very much in line with the Pre-Raphaelite aesthetic, closely linked with the work of Dante Gabriel Rossetti.

His art nouveau artwork often utilized pastel colors (quite unusual for the time) and became known for a time simply as “Mucha style”. Despite this, Mucha himself eschewed any suggestion of stylistic orthodoxy; insisting his art came purely from Czech history and spiritual sensibilities.

Mucha married Maruška Chytilová on 10 June 1906 in Prague. He had previously painted her likeness (Mariska's Portrait) in 1903. She accompanied him on later trips to America, which meant that Mucha’s daughter was actually born in New York City.

Their son, Jiri became a successful author and screenwriter who devoted most of his career to studies of his father’s works.

Mucha contributed several major murals around Prague. These notably included the Theater of Fine Arts in the center of the city and the Mayor’s Office at the Municipal house. He also designed the new Czech stamps and banknotes after the First World War.

Mucha made four trips to America between 1903 and 1922. During his time in the states, Charles Richard Crane noticed his work and later became a patron to the artist.

What is Alphonse Mucha’s The Slav Epic?

Crane was a well-known Chicago industrialist and Slavophile. He financially supported Mucha’s Epic of the Slavic People (1912-30). This was a series of twenty massive historical paintings, depicting various episodes from Mucha’s native land.

Mucha dreamt of completing a series on this scale ever since his youth and devoted all of his energies to these captivating paintings.

From 1922 onwards, Mucha lived in Prague. He donated his Slavic Epic paintings to the city of Prague before he’d even finished the cycle. The one condition was that the city build a special pavilion to display the works.

Falling in and out of favor since, the works were most recently shown in a 2016 exhibition at the National Gallery of Prague.

How did Mucha die?

The 1930s witnessed the rise of fascism across Europe. As a result, government and public opinion turned against Mucha and his artworks. The Nazi-influenced press described Alphonse Mucha paintings as “reactionary” and the artist an enemy of a people. Consequently, when Germany invaded Czechoslovakia in 1939, the Gestapo arrested Mucha.

The Gestapo interrogated Mucha at length. During this time, he became ill with pneumonia. Although released soon after, he never recovered from this illness, or the disappointment of seeing his beloved Czechoslovakia overcome.

Mucha died in Prague on 14 July 1939, from complications related to a lung infection. He was later interred at the nearby Vyšehrad cemetery.

It was also particularly popular in the 1960s, inspiring psychedelic music posters for bands such as Pink Floyd, as well as the more recent Stuckist movement exemplified by Paul Harvey.