All Artists
B
BELLOWS, George
Stag at Sharkeys 1909 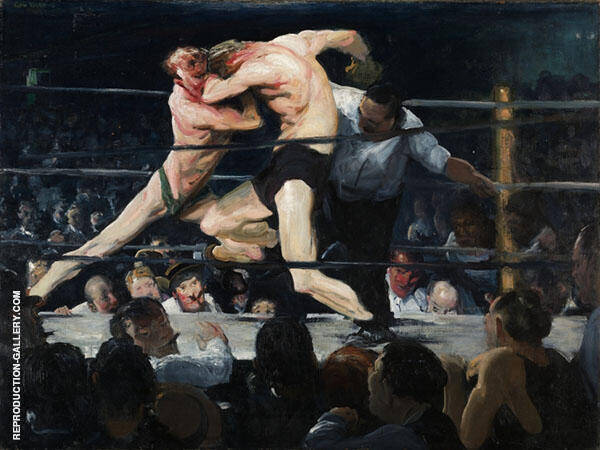 George Bellows Stag at Sharkey's is an astounding oil painting presenting two fighters in the ring. The action takes place in Sharkey’s private athletics club and bar.  Located opposite Bellows’ studio, he was a frequent visitor to the bar.

What is the Meaning of Stag at Sharkey's?

Stag at Sharkey’s represents two fighters in the ring. Additional symbolic meanings are sparse, but the various characters offer a fascinating insight into humanity and society in early twentieth-century New York.

Boxing offered a powerful analogy for the flourishing of the fittest and the strongest and most masculine societal figures. Yet, despite the appealing nature of this interpretation, Bellows once commented: “I don’t know anything about boxing,” sardonically adding, “I’m just painting two men trying to kill each other.”

George Bellows's oil paintings on canvas form part of the “Ashcan School” movement. Above all, this revolutionary approach to art focused on depictions of everyday life in poor neighborhoods with a strong social message.

Intriguingly, Bellows included a self-portrait in the painting. To the right-hand side of the composition, the bald man looking down (concentrating on his sketchpads) is the artist himself.

Stag at Sharkey's demonstrates a considered composition. While the men move in a blur of flesh (painted with a rapid and spontaneous “wet on wet” method), their shapes are no accident.

The diagonal line of the left fighter’s body is counterposed by the referee on the right, with his arm outstretched. The entire composition consequently approximates a triangle.

As viewers are seated alongside the audience, the figure in the foreground looks back at us while pointing towards the fight, inviting us deeper into the action.

Who are the Sharkey's Boxers?

The boxers themselves were probably members of the club. Outsiders could fight, but only with a temporary paid membership. Known as “stags,” these outside fighters were often young, male, and lower class.

In the Stag at Sharkey's, Bellows utilizes quick brushstrokes to form the bodies of the two men. This technique creates a sense of immediacy and blurred motion, simulating their swift movements in the ring.

Sharkey’s was a rowdy drinking saloon and backroom boxing establishment founded by Tom “Sailor” Sharkey. Sharkey was an ex-US Marine and actively sought the fellowship of his previous military life.

Despite this, many famous figures defended the sport and George Bellows paintings.  The most notable supporter was President Theodore Roosevelt.

Was George Bellows a Sportsman?

The painter George Bellows demonstrates his enduring love and fascination for contemporary sports. The artist enjoyed athletics, baseball, and basketball from an early age.

During his high school senior year, a scout from the Indianapolis baseball team tried to poach the young man. So Bellows enrolled at Ohio State University, where his love of art and illustration flourished.

Despite his love of baseball and basketball, George Bellows paintings of boxers earned the artist a place in the canon of American art. His series depicting amateur boxing matches was unparalleled before or since.

Other notable George Bellows boxers paintings include Members of this Club, Club Night, and Dempsey and Firpo. Characterized by dark, seedy atmospheres juxtaposed with bright, vivid bodies, these artworks provide an intense sense of motion and dynamism.

Sport wall art is for sale in our sporting paintings catalog.

Stag at Sharkeys 1909
By George Bellows