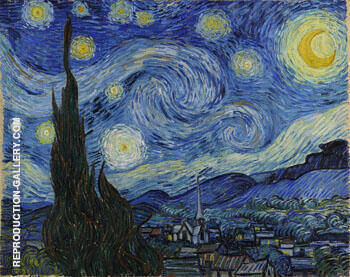 Starry Night is Vincent van Gogh’s most famous painting. For art critics and historians, it is his career-defining oil painting masterpiece. Alongside works such as Da Vinci’s Mona Lisa and Claude Monet’s Water Lilies, it is one of the most recognized paintings of Western European art.

When was The Starry Night painted?

To answer the question, “when was Starry Night painted?” Vincent's personal letters are invaluable. For example, in June 1889, Van Gogh wrote a letter to his brother Theo describing a “new study of a starry sky” he was currently painting.

The previous month he had told of the “wheat fields” visible from his bedroom window. In July, Van Gogh also described how the “very big” morning star lit up the countryside. The original Starry Night painting reliably dates to the spring and summer of 1889.

Although Van Gogh painted the same view in many different forms, Starry Night is the only nocturne among these works. Excitingly, astronomers confirmed that Venus (known as the morning star) was clearly visible in Provence during the spring and summer of 1889. It was indeed incredibly bright during this period, which means that the “star” in the painting (just right of the cypress tree) is the planet, Venus.

Where was The Starry Night painted?

In addition to the date of the painting, many people also ask where van Gogh painted Starry Night.

Van Gogh painted The Starry Night 1889 in Saint-Rémy-de-Provence. It is a small yet idyllic commune in the Bouches-du-Rhône department, located in the Côte d'Azur region of Southern France. Starry Night started painting after days spent gazing out from his east-facing lunatic asylum room window.

Consequently, much of the view was imaginary. Elements not apparent in the real scene included the dream-like village and the proximity of the cypress trees.  The painting also depicts the moon waning gibbous, as opposed to the waning crescent, as indeed it was during this time.

During this period, he convalesced in the Saint-Paul de Mausole asylum after his 1888 mental breakdown. The culminating episode of this breakdown resulted in Van Gogh cutting off his ear, famously depicted in Self Portrait with Bandaged Ear (1889). After this collapse, he voluntarily committed himself to the Asylum for treatment.

Alongside Starry Night, Van Gogh painted many of the best-known works of his career during his time in Saint-Rémy-de-Provence. He also created beautifully haunting works such as Irises (May 1889) and the Blue Self-Portrait (September 1889) at the asylum.

Van Gogh’s Starry Night over the Rhone inspired the post-expressionism art movement. Originating in the carnage of the First World War,  post-expressionist artists aimed to use expressive brush strokes to depict the soul or spirit of people and places. This technique contrasts the introverted characteristics of expressionism which prizes the artist’s internal psychic reality above all else.

Van Gogh himself was a member of the post-impressionist art movement. This movement was a reaction that started in the 1880s against impressionism, led by Claude Monet.

Van Gogh’s Starry Night exemplifies this approach. The swirling brushstrokes and luminescent tones strongly represent the artist's inner turmoil and emotional response to the world outside his window. As a true modern masterpiece, the painting has been on permanent display in the Museum of Modern Art (New York City) since its bequest in 1941.

Van Gogh reproductions are some of our most popular famous paintings.