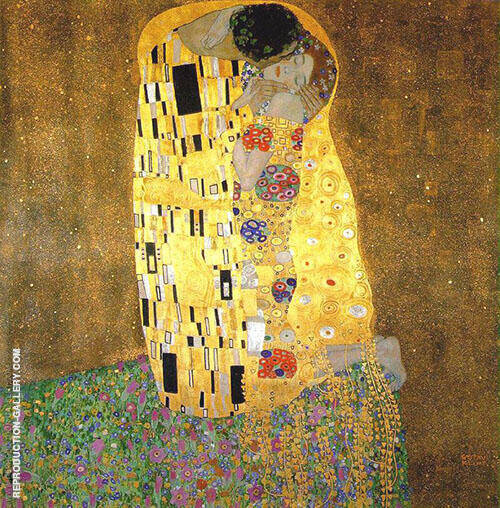 The Kiss Gustav Klimt is the artist's magnum opus.  This painting is a masterpiece of the Austrian symbolist movement, painted between 1907 and 1908.

The Kiss is the most iconic oil painting, instantly recognizable worldwide.

Klimt embellished the oil-on-canvas painting with gold, silver, and platinum leaf. Klimt loved adorning his works with precious metals, so much so that scholars consequently referred to this time as his “Golden Period.”

First displayed in 1908 at the Kunstschau, Vienna, The Kiss met with a warm reception from the critics. This reception was in distinct opposition to the previous scandalized reaction to Klimt’s University of Vienna Ceiling paintings. Since destroyed, only fragments remain, such as parts of the Medicine picture. At the time, they were described as “perverted excess” but engendered certain fame and notoriety for the artist.

Initially titled Liebespaar (the lovers), this Gustav Klimt artwork depicts two bodies in a tight embrace. The two-dimensional figures recline against a gold backdrop, supported by a flowery meadow. Intriguingly, the man’s face is unseen. Akin to other works such as The Kiss (1859) by Francesco Hayez (a possible inspiration for Klimt), this focuses the audience’s attention purely on the act of love itself.

Inspiration for Gustav Klimt’s The Kiss painting came from the leading artistic movements of the day. For instance, the decorative detailing on the clothing references the Art Nouveau movement. In addition, the floral meadow base uses organic forms reminiscent of the earlier Arts and Crafts movement.

The Kiss by Klimt is our most popular oil painting. It epitomizes the opulent fin-de-siecle spirit captured by the Vienna Secession artists. Klimt’s decadent inspiration came from the gold leaf on medieval manuscripts and the decorative floral tendrils seen in classical Greek and Roman art.

The Kiss was part of Klimt's more comprehensive exploration of similar themes. Paintings such as Fulfillment (the Stoclet Frieze) play on similar designs and poses. Other artworks, such as Hymn to Joy (1902) and Hope II (1907), similarly feature the recurring motif of elongated, highly decorated figures set against largely abstracted backdrops.

Critics believe the painting depicts Klimt himself, alongside his companion Emilie Flöge. Debates rage on the identity of the woman, however. Alternative interpretations suggest “Red Hilda” is more likely; a model who often sat for Klimt. Some argue the picture isn’t a direct representation of people but shows the moment Apollo kisses Daphne in Ovid’s Metamorphoses.

Others believe it depicts the tale of Orpheus and Eurydice (representing the exact moment when Orpheus turns around and loses his love forever). The woman’s passive posture and slight translucency support this last interpretation, suggesting her ultimate disappearance.

The Kiss remains one of the most popular Gustav Klimt reproductions, inspiring generations of art lovers since its inception.

Where is Gustav Klimt's The Kiss? 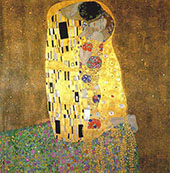