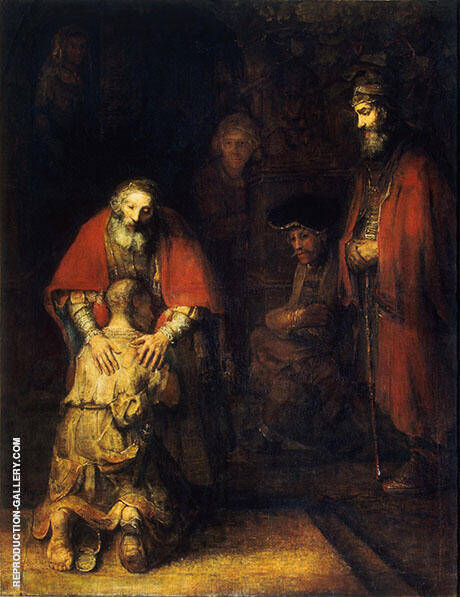 Return of the Prodigal Son c1669 By Rembrandt Van Rijn

Translated as “De Terugkeer van de Verloren Zoon”, The Return of the Prodigal Son is one of the most famous Rembrandt oil paintings from the Baroque period.

Depicting a key biblical parable, Rembrandt’s artwork represents the moment an errant son returns to his father. It currently hangs in the collection of the Hermitage Museum, St Petersburg, Russia.

When did Rembrandt paint his work The Return of the Prodigal Son?

The exact dating of The Prodigal Son painting remains unknown. Like many Rembrandt van Rijn paintings, it is undated.

Despite this, art historians cite the work as one of Rembrandt’s later compositions, completed towards the end of his career. Whilst he probably worked on the painting during his final two years of life, dating could range anywhere from 1661 to 1669.

What is the message of Rembrandt Return of the Prodigal Son?

The son left home, abandoning a loving family who feared for his death after months of uncertainty. The young man squandered his inheritance whilst traveling and consequently returned in a state of despair and destitution.

As a result, the son kneels in front of his father, begging for forgiveness. Knowing he doesn’t deserve forgiveness after his wanton behavior, the son begs for restitution in the position of a servant in his father’s household.

In a moment of extreme grace and forgiveness however, the father receives his son tenderly. He warmly welcomes him back into the household. It’s a parable demonstrating the grace of God and the forgiveness all Christians should demonstrate.

Critics note the portrayal of the father’s hands in particular. His physique metaphorically represents masculine and feminine parental qualities. Whilst his left hand appears slightly larger (set firmly on the son’s shoulder), the right hand is gentler and makes a welcoming gesture.

Who are the people in the Rembrandt Prodigal Son painting?

The figure on the left of the painting (wearing the red cloak) is the father. Kneeling at his feet, the son presses his head into the older man’s chest.

To the right of the scene is the older brother. The brother crosses his hands in judgment, reflecting his anger at the father’s easy forgiveness.

As told in Luke 15, the older brother chastises his father. He bemoans having served him without ever disobeying a single command, with no celebration or reward. The older brother objects to the father’s contrasting celebration of the younger sibling, who returned after devouring his fortune with prostitutes and vagabonds.

Despite this, the father simply replies it’s appropriate to celebrate because the younger brother “was dead, and is now alive again… he was lost, and is now found.”

Whilst the son, father and brother are easily identifiable, scholars are less certain about the identities of the other figures in Rembrandt’s artwork. The woman at the top left (barely visible amidst the darkness) is likely the mother, however.

The seated man (dressed in rich garb) could be an advisor to the father’s estate. The dress also suggests a powerful position such as tax collector, adding additional significance to the theme of wealth in the painting.

Who did Rembrandt paint The Prodigal Son for?

Incredibly moved by the Parable of the Lost Son, Rembrandt had a deep personal connection with this biblical narrative. He consequently painted the work for his own artistic, theological and academic contemplation.

Indeed, Rembrandt made many drawings, etchings and sketches of the scene throughout his career. These versions often contain various different figures, not all of whom directly relate to the biblical parable.

With the painting, Rembrandt interprets the Christian theme of mercy in his own unique way. It transgresses traditional religious art, going above and beyond common allegorical paintings of the Dutch Golden Age.

Rembrandt’s expert painterly realism is brought to life with his unique psychological awareness and spiritual insight. As a moment of tender familial silence and forgiveness, the painting draws viewers into its contemplative atmosphere, retaining its emotive power to this day.

Buying art online has never been easier. Return of the Prodigal Son is just one of the many famous Baroque oil painting reproductions offered for sale in many size options.

Known simply as Rembrandt, he is considered to be one of the greatest visual artists in history, and the most important artist in Dutch art history. Rembrandt was a master draughtsman and printmaker, as well as being a painter, and his work showed a broad range of style as well as subject matter, painting a great variety of subjects, from portraits and self-portraits to landscapes and biblical scenes, mythological scenes, animal studies and landscapes.

Like Vermeer, another Dutch Golden Age artist, Rembrandt never left his native Holland, but was influenced in his work by the Italian masters, and by other Dutch artists who had been to Italy to study, artists such as Pieter Lastman and Peter Paul Rubens.

Rembrandt was born in Leiden, to a well off family; his father was a successful miller, who sent the young Rembrandt to the University of Leiden, where he showed an interest and great aptitude for painting. He studied as an apprentice to a Leiden history painter, Jacob van Swanenburg, staying with him for three years.

After this Rembrandt had a brief but important six months apprenticeship with Pieter Lastman in Amsterdam. He then opened his own workshop.  In 1629 Rembrandt’s paintings were noticed by the Dutch statesman Constantijn Huygens, who introduced the young Rembrandt to Prince Frederick Hendrik, a Prince of Orange, who purchased many Rembrandt paintings over a period of many years.

In 1631, Rembrandt moved from The Hague to Amsterdam, where he achieved great success as a professional portrait painter.

In 1634 he had married Saskia van Uylenburgh in 1634. With the success of Rembrandt’s portrait paintings, the couple were able to purchase a newly built house in a smart area of the city, the Breestraat, which was becoming a prominent Jewish quarter of Amsterdam. Today, the house is the Rembrandt Museum House.  It has been restored with interiors very similar to those of Rembrandt’s time.

Rembrandt used many of his Jewish neighbors as models for his Old Testament series of paintings. This was unusual at a time when Jews were often discriminated against.

Saskia died in 1642.  Rembrandt had an affair with the woman hired to look after his son Titus when his wife was ill. Rembrandt then married a much younger woman with whom he had one daughter.

It was at this time that Rembrandt found himself in financial difficulties as he habitually spent more than his considerable income. As a result, he was forced to sell the house, moving to a smaller property, in a less affluent area of Amsterdam.

Rembrandt’s famous paintings are widely held in museums and private collections around the world. The most extensive collections are in the Rijksmuseum in Amsterdam and the Mauritshuis in The Hague. Other notable collections are at the Hermitage Museum in St Petersburg, the National Gallery in London, The Louvre in Paris, the Frick Collection and the Metropolitan Museum of Art in New York City, The National Gallery of Art in Washington, D.C., the Museum of Fine Arts in Boston, and the J. Paul Getty Museum in Los Angeles.

The painting is notable for its huge size – nearly 12 feet long and over 14 feet wide – with the central figures being nearly life sized. Over the years the painting was been trimmed to fit into a smaller frame and several of the originally 34 figures were lost. Rembrandt’s Night Watch three years to paint.

Other famous Rembrandt paintings include:

The Storm on the Sea of Galilee 1633. This is Rembrandt’s only known Seascape, and was stolen in 1990 from the Isabella Stewart Gardner Museum in Boston. The painting depicts the miracle of Jesus calming the storm. The painting has never been recovered.

Rembrandt’s The Jewish Bride painted in 1667 shows a father giving his daughter a necklace on her wedding day. This painting is held by the Rijksmuseum in Amsterdam.

The Head of Christ was painted in 1648. It is based on a Jewish model who was one of Rembrandt’s neighbors at the time, and is held by the Gemaldegalerie in Berlin.

Bathsheba at Her Bath was painted in 1654, showing the Biblical King David seeing Bathsheba bathing and seducing her. The painting is held by The Louvre in Paris.

The Man with the Golden Helmet was painted in 1650, and is also held by the Gemaldegalerie in Berlin, and is another classic example of the Dutch Golden Age.

Danae was painted in 1636 and shows the mythological figure Danae meeting Zeus in the form of a shower of gold. The painting is in the collection of the Hermitage Museum in St Petersburg.

Self Portrait with Beret and Turned Up Collar is one of many of Rembrandt’s self-portraits. The painting was completed in 1659 and is held by the National Gallery of Art in Washington, D.C.

Belshazzar’s Feast 1635, is Rembrandt showing his ability to paint large, Baroque style historical paintings and is in the collection of the National Gallery in London.

The Prodigal Son in a Brothel was painted in 1637 and it has been discovered that the two figures depicted in the painting Rembrandt himself and his wife Saskia. The painting is held by The Gemaldegalerie Alte Meister, in Dresden.

The Anatomy Lesson of Dr. Nicolaes Tulp 1632 is considered an early Rembrandt masterpiece.

Self Portrait with Two Circles is widely considered to be Rembrandt’s greatest self-portrait oil painting. Painted between 1665 and 1669, the portrait shows Rembrandt with his palette and brush, wearing a white hat and red bib over a white shirt and a fur coat. The meaning of the two circles is unknown.

The Return of the Prodigal Son 1661 – 1669 is one of Rembrandt’s final paintings before his death. Showing the famous Biblical parable, the painting is held in the Hermitage Museum in St Petersburg.,

Return of the Prodigal Son c1669
By Rembrandt Van Rijn