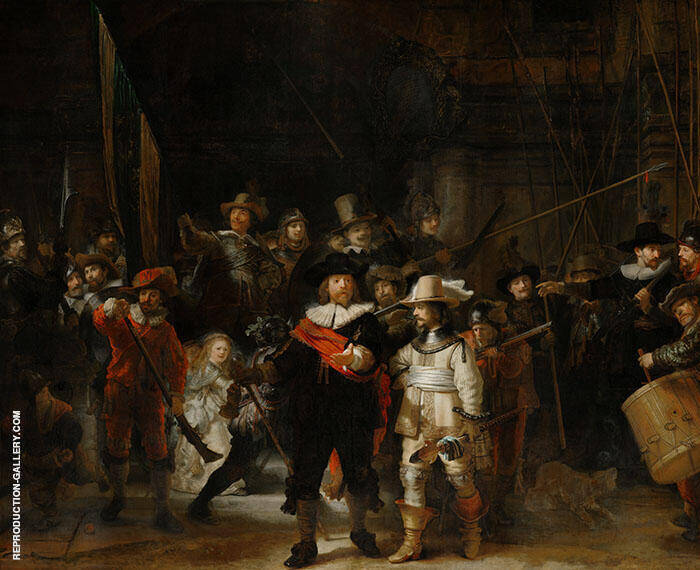 Rembrandt van Rijn, The Night Watch painting is officially titled the “Militia Company of District II under the Command of Captain Frans Banninck Cocq”.  It is an oil on canvas painting which is held by the Rijksmuseum in Amsterdam and it is one of the most famous Rembrandt paintings.

When Did Rembrandt Paint the Night Watch ?

The painting was commissioned in 1639 by Captain Banninck Cocq and his men; Rembrandt’s Night Watch painting depicts over thirty-four individuals. They paid 1,600 guilders for the group portrait, which was a massive amount of money at the time. Each named man within the work paid just over one hundred guilders each.

Even at this time, Rembrandt van Rijn paintings sold for substantial sums.

Rembrandt’s Night Watch painting is famous not only for the skill of the artist, but also for its enormous size. It measures a staggering 363 cm by 437 cm, truly enveloping the viewer in the scene.  The painting was originally commissioned to hang in the company’s banqueting hall and the large size was well suited to the grand proportions of the newly constructed Musketeer’s Meeting Hall.

The large scale of the painting has led scholars to debate where Rembrandt could have actually painted the group portrait as his studio was simply too small.

However, around this time, Rembrandt applied to the city to extend a “summer kitchen” at the rear of his property.  The recorded dimensions of his extension would have just fitted the painting.

Where is the Night Watch Painting?

Whilst the exact location where the painting was completed remains uncertain, there are schools of thought which believe it may have been the adjacent church. Other theories are that it was painted directly in the Kloveniersdoelen (the Musketeers' Meeting Hall).

As well as the sheer size of the painting, Rembrandt’s Night Watch painting demonstrates his proficiency with light and shadow. The artist employs the technique of “tenebrism” which from Italian, literally translates as “gloomy and mysterious”. The style incorporates particularly strong chiaroscuro (bold contrasts between light and dark), with darker tones dominating. Similarly, to theater spotlights used today, it adds great drama and movement to Rembrandt’s famous painting.

Within the work, Rembrandt depicts the Night Watch company led by Captain Frans Banninck Cocq and his lieutenant, Willem van Ruytenburch. Cocq appears in black with a red sash, whilst Ruytenburch is in yellow with a white sash. Within Dutch Golden Age art, yellow commonly referenced victory.

The viewer's gaze falls on the most significant figures in the composition, situated in the center. Following that, an enigmatic woman in the background emerges, carrying a chicken. This references the militia’s traditional emblems as well as signifying a (dead) defeated enemy. The woman is also holding the militia's goblet, while the man in front wears a helmet with an oak leaf, another company emblem.

In 1715, Rembrandt’s famous painting hung in the Amsterdam Town Hall. To squeeze the painting between two pre-existing columns, installers trimmed it on all four sides. Whilst this practice is shocking now, this was common at the time. Despite this, the cropping resulted in two characters on the left-hand side disappearing from existence.

To this day, these sections of the portrait are still missing. We only know the original composition from a Gerrit Lundens copy hanging in the National Gallery, London.

In 2021, these missing sections were recreated by Amsterdam’s Rijksmuseum using Lunden’s copy and artificial intelligence techniques. This placed the lieutenants slightly off-center and reintroduced blank space into the painting. These additions created a dynamic feeling of marching towards the left, thought more representative of Rembrandt’s original composition.