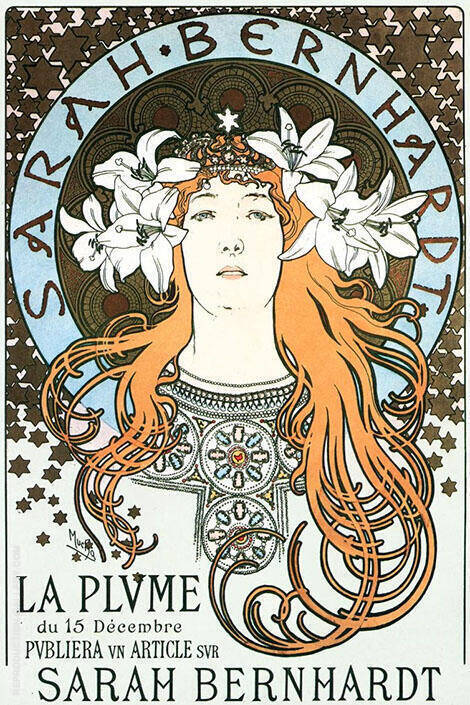 Alphonse Mucha Sarah Bernhardt is one of the most famous Art Nouveau posters of the late nineteenth century.

It represents a fine example of Alphonse Mucha’s creative output and an iconic representation of a legendary French actress.

During the later part of his life, Mucha moved to paint oil on canvas, including a series of oversized canvases which formed the Slav Epic series.

Who was Sarah Bernhardt?

Sarah Bernhardt was an immensely successful French actress working at the turn of the century. Also known as La Divine Sarah, she was one of the greatest French actresses and theater managers of the late-nineteenth century. She remains one of the best-known figures in all of stage history.

Bernhardt performed all over Europe and the Americas, portraying characters from Shakespeare, Greek Mythology, and the classics of French literature. Her charisma, grace, and beauty held audiences captivated.

In addition, Bernhardt’s voice was breathtaking, reinforced with flamboyant acting and consummate diction. Working alongside Mucha, she also had an unparalleled knack for self-promotion.

Why was she important to Alphonse Mucha ?

Alphonse Mucha owed much of his career to Sarah Bernhardt.

His poster for Gismonda (featuring the actress) made him famous. However, it also established a professional collaboration and personal friendship that lasted decades.

In 1894, Mucha worked at Lemercier’s printing workshop in Paris, correcting illustrations. Bernhardt dropped in, discussing a new poster for the play Gismonda. Unfortunately, all the regular illustrators were on holiday, so Mucha, a humble apprentice illustrator, attended the meeting.

Despite his lack of experience, Bernhardt loved the work. The rest is history.

In this poster, Sarah Bernhardt’s name appears in a blue halo over her head. Her auburn hair flows over her shoulders, forming characteristic Art Nouveau sinuous swirls. She wears a tiara in her hair, designed by Mucha, adorned with white lilies. It’s a flower symbolizing death and innocence, a fitting choice for Bernhardt’s dramatic role.

Why did Mucha create the Sarah Bernhardt La Plume poster?

This poster features Bernhardt as “La Princesse Lointaine” for La Plume magazine. In this play, Edmon Rostand portrayed the character of “Mélissinde”.

Princess Lointaine became a stock character of French theater, representing the unattainable loved female. Playing on these connotations, Bernhardt’s dress and the necklace are distinctly medieval. She represents the upper-class and impossible ideal female, fixated upon by male desire.

With performances commencing in 1895, the poster initially appeared for a banquet celebrating Sarah Bernhardt. Organized by her friends and supporters, it took place at the “Grand Hotel” in the center of Paris on December 9, 1986.

The poster was immediately successful, measuring 69 by 51 centimeters, and produced as a color lithograph.  Indeed, Mucha reworked his famous poster for La Plume magazine. As a result, it was featured in the La Plume Edition d’Art, in postcard size in 1897.  The French department store La Belle Jardinière also sold postcards.

Alphonse Mucha's paintings and posters inspired Art Nouveau's artworks for generations to come. As a style of art flourishing from 1890 to 1910, his portrayals of Sarah Bernhardt were particularly important for the movement.

However, this poster was a relative rarity in Mucha’s output. Instead, he often worked with full-length portrayals like Gismonda and Médée.

Mucha’s fascination with Japonisme (mainly ukiyo-e prints), the symbolism of flowers, and medievalist and Byzantine art all impacted the development of the Art Nouveau movement. His long, narrow forms, subtle pastel shades, and beautiful figures epitomized the style.

The ornamental style of other Art Nouveau artists, architects, and designers such as Charles Rennie Mackintosh, René Lalique, and Egon Schiele certainly owe a great deal to Mucha.

Despite later widespread renown, in the late nineteenth century, Alphonse Mucha's artworks were truly pioneering in their originality. While the 1897 poster (the topic of this description) has since become one of the most famous Alphonse Mucha Art Nouveau posters, Sarah Bernhardt particularly loved La Dame aux Camélias and Gismonda.