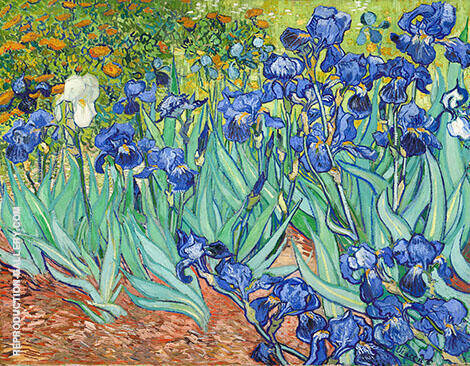 Irises by van Gogh is part of a series of paintings depicting irises.

Van Gogh created his oil painting in 1899 while residing at the mental asylum in the town of Saint-Rémy-de-Provence. Unfortunately, he died just over a year later, on 29 July 1890.

Where was Irises painted?

Painted in May 1889, Vincent van Gogh's Irises is a work of astounding beauty and energy.

The artist painted Irises within a week of entering the asylum, demonstrating the personal significance of irises to the artist. The flowers bloomed in the asylum’s garden; an area patients could stroll around as part of their therapeutic recovery.

Indeed, he described this work as the “lightning conductor” for his illness, as he felt continuing to paint separated him from ultimate insanity.

Why did Vincent paint his favorite flower?

Despite the symbolic importance of irises, this artwork (like most Van Gogh oil on canvas paintings) was a post-impressionist study of color. He created powerful color contrasts with a segmented background and vivid impasto paint.

The purple flowers stand out clearly and brightly against the predominantly yellow, green, and brown background.

Although they appear with predominantly blue tones today, the original pigments contained much more red (creating a solid purple hue). Over time, however, the red pigments faded, resulting in the blue petals we currently see.

In creating this image, Van Gogh utilized Japanese ukiyo-e woodblock prints for inspiration. The large, flat planes of color (with little natural shading or depth) are typical of the style. Van Gogh references this inspiration with the use of strong black outlines, unusual angles, and cropped composition.

Despite the strong, dark outlines, he presents the flowers with surprising softness and lightness. Each one of the flowers is unique and carefully studied for its movements and shapes.

Every petal in this painting reveals twists and curls with blooms forming an image of utmost natural beauty. It’s poignant to reflect how full of life these flowers are, with no hints of the tragic events unfolding in the artist's personal life.

What is unique about Vincent van Gogh's Irises?

In this Van Gogh irises painting, the flowers form an artistic study (rather than a finished composition in its own right). No preparatory sketches for this artwork appear in Vincent's diaries and letters to his brother.

Despite his own low opinion of the artwork, his brother Theo disagreed, and he recognized its exceptional quality immediately.

On witnessing the painting’s astounding beauty, Theo submitted the artwork to the Société des Artistes Indépendants. Accepted for the exhibition in September 1889, it was one of the few paintings publicly displayed during Van Gogh’s lifetime.

Reflecting on the work, one art critic (Octave Mirbeau) opined how well Van Gogh understood “the exquisite nature of flowers”.

Sadly, Vincent could not see a positive public reaction to his paintings. Still residing in the Saint-Rémy-de-Provence asylum, Theo wrote to him, describing the painting’s strong impression on viewers. He explained how it caught the eye, even “from afar,” receiving warm appreciation as a beautiful study “full of air and life.”

Today, the painting remains one of Van Gogh’s most famous paintings. It currently hangs in the J. Paul Getty Museum in Malibu, USA.

How many times did Van Gogh paint irises?

Van Gogh repeatedly returned to the theme of irises throughout his artistic career. The exact number is unknown. However, there are four famous iris paintings surviving today.

The flowers appear in oil on canvas impasto paintings as well as pencil sketches and illustrations on letters to his brother Theo. Although other Vincent van Gogh flower paintings (such as Sunflowers and Branches with Almond Blossom) are now better known, irises were one of his favorites.

Especially during Van Gogh’s later troubled years in the asylum, irises were a frequent fascination. They are the focus of another work, Vase with Irises (May 1890), depicting these stunning flowers set against a vivid pure yellow background.

Other Van Gogh oil paintings featuring Irises include Field with Irises near Arles (1888), where the flowers almost disappear into a yellow cornfield.

Irises (1890) also depicts the flowers set against a white background, sitting in a cool white vase on a soft green surface. A much calmer, more contemplative work, it was amongst the last paintings created before Van Gogh’s suicide.