All Artists
B
Bruegel, The Elder, Pieter
Netherlandish Proverbs 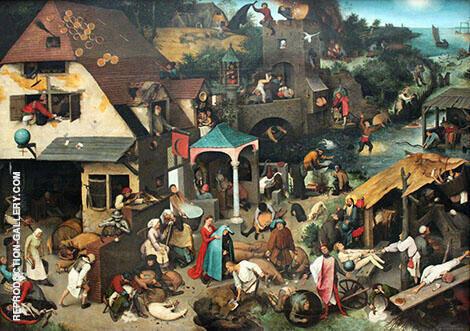 The Dutch Proverbs by Pieter Bruegel the Elder

Also known as “The Blue Cloak”, “Flemish Proverbs” or “The Topsy Turvy World”, Netherlandish Proverbs is an allegorical artwork painted by Pieter Bruegel the Elder.

Known for his landscapes and peasant scenes, Bruegel the Elder was a master of Dutch and Flemish Renaissance painting. He presents these “everyday” subjects on a monumental scale.

When did Bruegel paint Netherlandish Proverbs?

Painted in 1559, Bruegel’s Netherlandish Proverbs is a truly unique creation. It presents a chaotic and at times nightmarish scene. In the painting, humans, animals and inanimate objects illustrate common Dutch idioms and proverbs.

General themes are identifiable however, broadly referencing the corrupted nature and foolishness of humanity. Bruegel’s original title was in fact “The Blue Cloak or The Folly of the World”.

The blue cloak of the painting’s original title appears in the center of the composition. A wife (dressed in crimson) places the azure cloak around her husband’s head and shoulders. This represents the proverb “Putting the blue cloak on her husband”, insinuating that she was cheating or deceiving him. In further references to human foolishness, another man carries a “basket of daylight”.

In his subject matter, Bruegel took inspiration from medieval manuscripts, particularly the Flemish Books of Hours. These were Christian devotional texts containing depictions of everyday ordinary life in the marginalia. The calendar scenes in these books also frequently depicted agricultural laborers in recognizable landscapes.

Bruegel worked on several smaller paintings of proverbs prior to creating this masterpiece. Other Pieter Bruegel paintings on similar themes included Big Fish Eat Little Fish (1556) and Twelve Proverbs (1558). Despite this, Netherlandish Proverbs was the artist’s first full-scale proverbial painting.

The Dutch Proverbs by Pieter Bruegel the Elder depicts over one hundred individual proverbs and idioms. Art Historians count at least 112 proverbs, although the total amount may be greater.

The viewer’s gaze moves around the complex composition in a circular motion. Each “scene” has equal importance within the overall landscape.

Some of the proverbs still in popular use include phrases such as “Swimming against the tide” and “Banging your head against a brick wall”. Most of the idioms are no longer common-place in the Dutch language, however.

One of the most visible sayings in the painting is “having one’s roof tiled with tarts”. This represents the idea that someone has abundant material possessions (i.e., they are incredibly wealthy). This refrain also appeared in another Bruegel artwork, the Land of Cockaigne (1567).

Other more unusual proverbs include “a pillar biter” (meaning to be a religious hypocrite, depicted in the lower left of the composition) and “horse droppings are not figs” (not to be fooled by appearances, with a man and a horse appearing in the upper right).

Why is Netherlandish Proverbs so significant?

Most recently, the American artist T.E. Breitenbach painted Proverbidioms, a work which even surpassed Bruegel for the sheer number of proverbs depicted. In this artwork, Breitenbach depicts over 300 sayings represented in a literal, comical manner.

Bruegel was also an important formative influence on later Dutch Golden Age painters. He informed and inspired the work of true masters such as Frans Hals and Rembrandt van Rijn

Pieter Bruegel The Elder was a 16th century Dutch genre artist specializing in paintings of landscapes, peasant scenes, festivals, feast days and village life. The period in which he was born, and about which he painted, was a time of significant change in Europe. It was the end of the High Renaissance of Michelangelo and Leonard da Vinci the time of the Martin Luther and the Reformation. At this time the Protestant Church wanted art destroyed and the Catholic Church wanted more religious subject matter. In fact, Bruegel destroyed many of his paintings prior to his death in 1569 , in order to protect his family from religious persecution.

Let one of our talented professional artists recreate this oil painting reproduction for you.