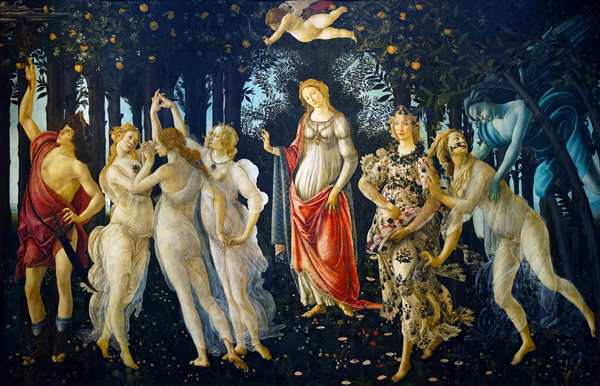 Botticelli was born in Florence in around 1445 and died in 1510 and unlike other artists of the period he never traveled from his place of birth.

Italian Renaissance Movement artist Sandro Botticelli trained initially as a goldsmith but then as an artist under the tutelage of Fra Filippo Lippi, a leading Florentine painter, who enjoyed the patronage of the Medici family.

By the 1480’s Botticelli was regarded as a leading Portrait painter although he is known for his large religious paintings.

Botticelli’s mythology paintings, The Birth of Venus and Primavera are his most famous and both are held by the Uffizi Gallery in Florence.

Primavera was painted c1470 and brings together a group of classical mythology figures in a garden. The general consensus is that this painting heralds the coming of Spring and it is thought to have been commissioned by a member of the Medicis, although no records confirm this.

Botticelli’s The Birth of Venus is often mentioned in the same sentence as Primavera. The Birth of Venus painting depicts the Goddess Venus, who is emerging from the sea whilst riding on a seashell which is being driven by the breath of Zephyrus.

Both paintings are iconic Renaissance art masterpieces which had a profound influence on the 19th century Pre-Raphaelite art movement.