All Artists
B
BREITNER, George Hendrik
Girl in Red Kimono 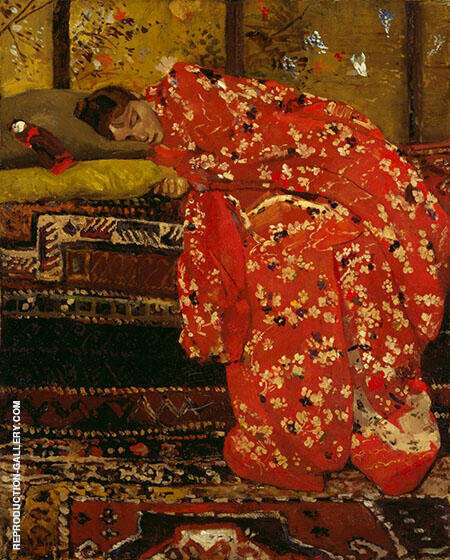 George Hendrik Breitner was born in Rotterdam in 1857 and attended The Art Academy in The Hague. Breitner was both an artist and also a photographer and is considered part of the Amsterdam Impressionist movement, which was influenced by The Hague School, a group of Dutch artists painting between 1860 and 1890. The Hague School artists, notably Jozef Israels, and Anton Mauve, were themselves influenced by the Barbizon artists, particularly Theodore Rousseau, Jean Francois Millet, and Jean Corot.

In addition to Breitner, other Amsterdam Impressionists of the same period were Isaac Israels, Jan Toorop and the Belgian painter James Ensor.

Noted for his paintings of street and harbor scenes, Breitner painted outdoors, known as en plein air painting and he used photography as a means of recording street life that he would then use in his paintings at a later date. The Dam in Amsterdam 1836 is an oil painting which George Hendrik Breitner created using this technique.

George Breitner was introduced to Vincent van Gogh by his brother Theo van Gogh, and the two sketched together in The Hague in 1882, where they portrayed working class subjects, laborers, servants and people from the lower class districts. Breitner considered himself as an artist of the people, and his subjects were city views, wooden foundations near the harbor, demolition and construction sites, and the canals of the city.

Like Rembrandt before him, Breitner also painted female nudes, but like Rembrandt also he was criticized because his female nude paintings were very realistically painted and not stylized, as was the prevailing fashion of the time. Breitner’s Reclining Nude , White Sheets was painted in 1888.

George Breitner travelled extensively during his last decade of his life, exhibiting in the US. and the major capitals of Europe. However, it was in the Netherlands that his reputation and fame were secured. Breitner’s legacy was the introduction of social realism to the Netherlands, in much the same way as the paintings of Gustav Courbet and Jean François Millet exposed the great social injustices and poverty of the age.

We are delighted to introduce the oil paintings of George Hendrick Breitner to you and to include his work in our catalogue of Most Popular Artists. George Breitner art reproductions on canvas are all recreated by one of our resident professional artists who ensure that every oil painting maintains the integrity of the original work of art.