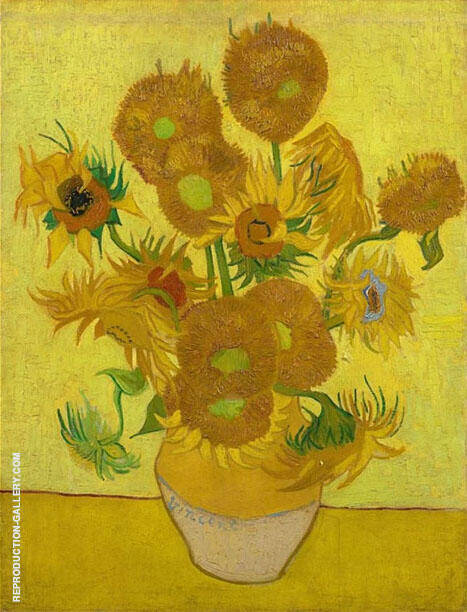 This famous sunflower painting needs no introduction. As one of the most iconic and most loved artworks of all time, it holds a unique place in art history.

Where is the original Sunflowers by Vincent van Gogh?

Vincent Van Gogh Sunflowers (1889) is one of seven versions of these extraordinary flowers.

Today, five examples remain on display in museums around the world. One resides in a private collection. Another (purchased by a Japanese collector) was sadly destroyed during World War Two.

Of the versions displayed in museums, the best-known 1889 painting (the topic of this description) hangs in the National Gallery, London. Van Gogh’s other sunflower paintings on canvas hang in the Van Gogh Museum, Amsterdam, the Philadelphia Museum of Art, the Sompo Museum (Tokyo) and the Neue Pinakothek in Munich, Germany.

The “original” two sunflower paintings (those first completed by Van Gogh) are the versions in a private collection and destroyed by bombing.

In this painting, Van Gogh portrays fifteen individual sunflowers. Each flower represents a different stage in their life cycle. Some are merely young buds, as yet unopened (for instance, the bud in the lower left corner). Others are fully mature and in full bloom (seven in total), with seven more progressing towards eventual decay.

In contrast with the impressionist’s small dappled brushstrokes, Van Gogh depicts each petal with careful, elongated brushstrokes. Each movement follows the overall shape of the petals, stems and leaves. Indeed, the sinuous lines almost veer towards an Art Nouveau style.

Aside from the painting’s literal content, the life cycle of the sunflower also represents the “vanitas” tradition of Dutch art. As well as this, sunflowers further symbolize love and passion in popular culture. Embodying platonic (non-sexual) love as well as eros, this meaning stemmed from sunflowers always following the sun.

In Dutch culture, sunflowers referenced true Christian believers always trusting and following Christ. For Van Gogh, this devotion represented his own dedication to art and beauty. The association with art, faith and love also makes the flowers an appropriate subject for welcoming Paul Gauguin to Arles.

Aside from the many metaphorical possibilities, Van Gogh’s sunflowers also simply represent the beauty and energy of the natural world. Their likeness appears in many Van Gogh paintings (whether still life or natural scenes), painted throughout his career.

Why did Van Gogh choose sunflowers?

Writing to his brother, Van Gogh simply declared “the sunflower is mine”. Indeed, in this prescient comment, Van Gogh accurately predicted his identification with sunflowers in the popular imagination.

Whilst no other artist is as closely related to a specific flower as Van Gogh, we know relatively little about his exact reasons for choosing sunflowers. He did write to the art critic Albert Aurier however, describing how sunflowers symbolized “gratitude” for him personally. This is the most direct explanation Van Gogh ever gave for choosing these unique flowers.

This specific sunflower painting appeared during a rare moment of intense optimism for Van Gogh. For this troubled artist, yellow was the color of happiness.

He painted the artwork at a time of great personal excitement, awaiting the arrival of Paul Gauguin at his home in Arles in the South of France. Van Gogh hoped the two men would pioneer an artist’s colony and foster a long-term creative partnership.

Despite this, sunflowers also represent more tragic cycles of life and death. Van Gogh possibly chose the flowers for their transient beauty, as the petals rapidly fade after a short period of bright, beautiful blooms

Aside from their symbolic importance, Van Gogh also knew Gauguin liked his sunflower pictures. Whilst he didn’t paint them directly for Gauguin, he was eager to hear his friend’s esteemed artistic opinion.

Sadly, Gauguin frequently criticized Van Gogh’s work. The emotional anguish leading from frequent arguments was too much for Van Gogh to bear.

Whilst the fall-out from Gauguin and Van Gogh’s brief period of residence is well-documented (culminating in Van Gogh severing his own ear), what’s less well known is the two men stayed in touch afterwards.

Continuing to exchange letters, Gauguin even asked Van Gogh to create another sunflower painting. These flowers clearly held significance for the two artists, as Gauguin created Van Gogh Painting Sunflowers during his stay. The entire scene was imagined however, as the sunflower season was over during Gauguin’s time in Arles (lasting from October to December 1889).

After Van Gogh’s death, Gauguin also painted Sunflowers (1901) in a moving tribute to his friend.

On his arrival in Paris in 1886, Van Gogh adored the bright color palette of artists such as Renoir. The impressionist use of contrasting color and expressive techniques transformed Van Gogh’s paintings, leading to experimentation with unmixed, vivid colors.

Sunflowers appear in many Van Gogh still life, drawings, sketches and studies, for instance Still Life with Roses and Flowers. Despite this, Van Gogh’s specific “sunflower series” refers to works created in 1888 and 1889.

Whilst some paintings of sunflowers may have been lost or destroyed, we know of seven artworks forming the series.

These seven paintings form two main phases. The first phase commenced in August 1888. Van Gogh painted all four artworks in just one week, writing to his brother Theo that he worked “with the gusto of a Marseillaise eating bouillabaisse”.

The artist further commented that if he continued at a similar rate, he’d soon have “twelve or more paintings”, transforming his room into a “symphony in blue and yellow”.

Van Gogh created three further replica artworks in January 1889. He described these latter three paintings as “absolutely equal” and identical to the previous works. These copies were intended as side-panels for Van Gogh’s portrait of Madame Roulin (1888).

What is so special about Van Gogh Sunflower paintings?

Van Gogh’s Sunflowers are special for many reasons. In the first instance, they represent a stunning presentation of painterly skill and emotive beauty. The flowers themselves mirror the sun and heat of Provence, with each floral orb referencing the fiery sun itself.

In addition, the work was amongst the first paintings produced by Van Gogh after moving to Arles. It reflects his growing artistic and personal self-confidence. Indeed, Sunflowers demonstrates the artist’s new expressive and post-impressionist style, communicated via a strictly limited color palette.

Van Gogh described the work as simply “a picture all in yellow”. Despite this focus on a single tone, the yellows used are astounding in their variety. From greenish yellows in the background, they range to vivid orange ochres and the warm tones of the vase itself.

Today, Vincent van Gogh Sunflowers remains not only the artist’s best known and loved work, but one of the most famous paintings in the entirety of art history.