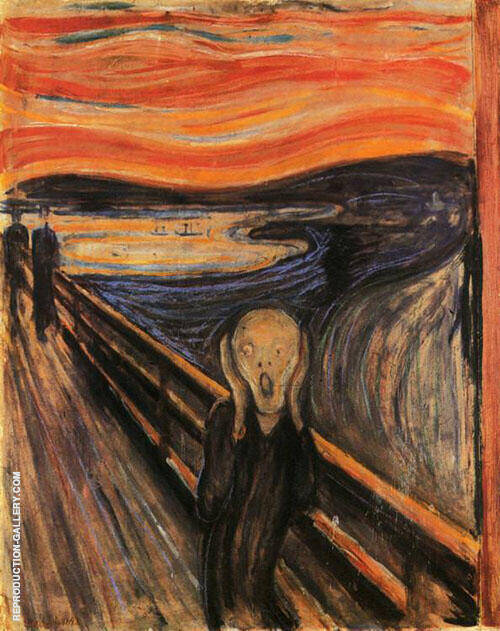 Edvard Munch The Scream is an instantly recognizable and celebrated painting. This artwork is an “icon” of contemporary art and a modern Mona Lisa representing universal deep-seated anxiety.

The Scream is the popular name for this masterpiece of Symbolism art. Norwegians refer to the painting as “Skrik” and Germany as “Der Schrei der Natur,”  While this oil painting goes by many names, whatever its title, few fail to recognize the iconic agonized face against the vivid, swirling background.

What is the Meaning of Munch's The Scream?

Munch's Scream 1893 is renowned for capturing the universality and anxiety of the human condition. The Paris Exposition Universelle of 1889 (attended by Munch) displayed a newly discovered Peruvian Mummy.   The Mummy is in a fetal position, with its hands grasping the sides of its head. The image provides an uncanny likeness to The Scream's pained face.

In a diary entry of 22 January 1892, the Norwegian painter spoke of how he walked at sunset and saw the clouds turning “blood red.” Munch describes the feeling of an “infinite scream passing through nature” accompanied by an indefinable urge to capture the moment in paint.  The result of Munch's overwhelming experience is his most famous painting, The Scream.

Whilst the specific location of Munch's famous painting is unknown, some academics believe it shows a fjord overlooking Oslo. Investigations into the explanation for the "blood red" sky suggest inspiration comes from the volcanic eruption of Krakatoa and its nacreous clouds.

There is conjecture that it was associated with his sister’s stay at a lunatic asylum, where she suffered from manic depression.

Munch himself coped with mental illness, family deaths, and their rigidly religious father, resulting in severe episodes of depression and alcoholism. These experiences all influenced Edvard Munch paintings and the emotions expressed within them. The Scream possibly reflects “depersonalization disorder,” where there is a sense of flux about the world and self.

What is Munch's Painting Style?

The long, strained brushstrokes of The Scream were a defining feature of the artist’s work.

Edvard Munch painted Madonna in 1894, the year after the Scream, which has noticeable similarities.

In 1888 the artist experimented with romantic subject matter, and Edvard Munch’s The Kiss (1897) provides a notable example of his painting style.

The faces in The Kiss merge into one form, which Munch intends as a symbolic representation of wholeness.  There are parallels between these flowing, faceless forms and the existential horror in The Scream.

Edvard Munch's paintings inspired the expressionist art movement, which originated at the start of the twentieth century. The Expressionist artists united in their desire to present the world objectively.

The Expressionist Art Movement championed artists such as Franz Marc, Ernst Ludwig Kirchner, and Der Blaue Reiter group.  This Group of artists took Munch’s dynamic strength and applied it to the horrors of post-war Europe.

Emotions and impressions were paramount within this movement, where meaning distortions in color and form were common. These artists celebrated Edvard Munch’s The Scream as the zenith of subjectivity over physical reality.

Today, The Scream Edvard Munch original versions hang in the National Gallery and the Munch Museum in Oslo, Norway.

Buy Edvard Munch painting The Scream from our catalog of famous painting replicas.

Reproduction oil paintings are 100% hand-painted by one of our resident professional artists.

The Scream 1893
By Edvard Munch