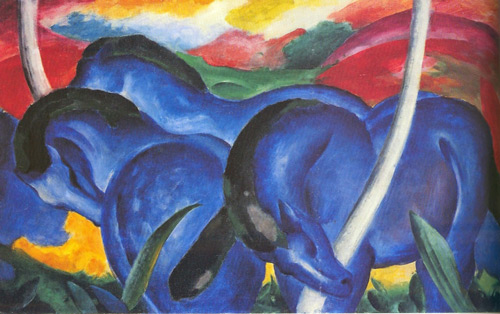 Large Blue Horses is one of the most famous animal oil paintings on canvas of all time.

Measuring at over 105 by 180 centimeters, it’s an imposing and impressive piece.

When did Franz Marc paint the Large Blue Horses?

Franz Marc The Large Blue Horses is a masterpiece of expressionist art. Known in German as Die Grossen Blauen Pferde and painted in 1911, it’s one of Franz Marc’s most famous artworks.

For the two artists, blue was the color of spirituality. The darker the shade, the more it awakened human connections with the eternal and the intellectual.

What is the meaning of Large Blue Horses by Franz Marc?

Even amongst Franz Marc paintings, Large Blue Horses is particularly symbolic. It represents our deepest desires for unity with nature and eternity.

The painting depicts three brightly colored blue horses in front of a rolling red landscape. The entire painting is full of vibrant primary colors and simple forms. This provides a profound sense of emotion, with the disparate elements appearing to unite into a vigorous yet harmonious whole

Whilst the curved lines build a sense of peace and balance, the psychological intensity of the artwork increases with the expressive red background. For Marc, red represented violence and base emotions. The way the hills threaten the unaware blue horses hints at an ominous atmosphere just below (or above) the surface

The exact meaning of Large Blue Horses remains a mystery, however. The art historian Gabi La Cava argues “the feeling” evoked is the most important aspect of Franz Marc’s art. Each viewer creates their own emotional resonance with the painting.

Franz Marc loved painting animals, particularly horses. He felt the innocence of animals allowed him to develop his own spirituality and become closer to God. Writing in 1915, Franz Marc commented that animals possessed a “virginal sense of life”. This sense awakened “all that was good” in him.

In addition, Marc’s detailed color theory dictated his representations of animals. He believed blue was a powerful and masculine color (hence the choice in Large Blue Horses). On the other hand, yellow represents more feminine qualities.

This is further evidenced in creations such as Yellow Cow by Franz Marc, known in German as Gelbe Kuh. Marc described yellow as “gentle, cheerful and sensual” in direct opposition to blue as “spiritual and intellectual”.

In this instance, the yellow cow could be a hidden reference to Marc’s lover and muse Maria Franck. The couple married in 1911. In this interpretation, the triangular blue mountains become Marc’s own abstract self-portrait; and a rather unusual wedding picture.

Marc returned to the theme of blue horses repeatedly throughout his career. Whilst Large Blue Horses is one of the artist’s most important depictions of animals, paintings such as Little Blue Horses (1911) and Tower of Blue Horses (1913) reflect similar compositional devices.