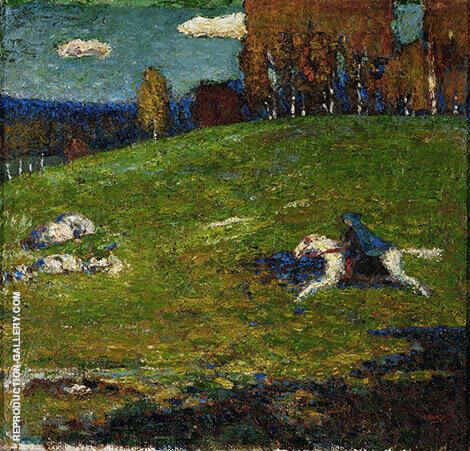 The Blue Rider By Wassily Kandinsky

Painted in 1903, Wassily Kandinsky The Blue Rider is a foundational creation of European expressionist and abstract art.

Where was Wassily Kandinsky from?

Born in Moscow (Russia), Kandinsky spent much of his childhood in Odessa (part of present-day Ukraine). As a major seaport and trading hub, Odessa was a bastion of art and culture known as the “Pearl by the Sea”.

Kandinsky attended Grekov Odessa Art School here, but only began painting at the age of thirty. This was after seeing one of Monet’s Haystacks series. Transfixed by the painting’s beauty, Kandinsky subsequently traveled to Munich to commence his artistic career.

The Blue Rider (or Der Blaue Reiter) is one of Kandinsky’s earlier paintings. Despite this, it represents many of the artistic concerns that dominated Wassily Kandinsky artwork thereafter.

In the artwork, the paint is thickly applied with stippled brushwork. Whilst green is the overriding color, vivid blues and shocking white interrupt the otherwise serene scene. The leaves on the trees are turning yellow, brown and auburn with the changing seasons.

The horse and rider charge across the hillside with unparalleled speed, the stippled brushwork enhancing the impression of blurred movement.

What Does The Blue Rider Represent?

The Blue Rider literally represents a horseman galloping at speed through a verdant green meadow. He rides a white horse (wearing a blue cloak) and passes a forest.

Unusually (for one of the most famous abstract oil paintings of all time), critics comment the painterly skill is reasonably unremarkable. What sets it apart however, is how the painting represents Kandinsky’s shift away from popular impressionism towards modern abstract art.

Kandinsky abstract art was full of symbolism. The color blue was particularly important to both Wassily Kandinsky and his artist friend, Franz Marc.

Both painters believed blue enabled people to get closer to spiritual and intellectual concerns. The darker the shade of blue, the more it linked humanity with the eternal.

This sense of moving towards spirituality and truth is evident in The Blue Rider. The figure and their horse almost glide inexorably towards the deep, dark, blue horizon.

Whilst The Blue Rider remains figurative, it pre-empted later abstract art such as Kandinsky Several Circles (1926). In paintings such as this, Kandinsky focused on simple forms (the circle) to focus purely on color, composition and the unity of opposites.

Created later in Kandinsky’s career, the painting is abstract in its truest sense. There are infinite possibilities of creative interpretation, generating a sense of spiritual and emotional harmony for the observer. The circles overlap and change color on a black background, with their random alignment belying deep purposefulness.

Who Started The Blue Rider Movement in Expressionism?

Lasting from 1911 to 1914, Der Blaue Reiter art was fundamental to the development of German Expressionism.

It’s unclear whether the movement is actually named after The Blue Rider art by Wassily Kandinsky, however. Indeed, Kandinsky later said the name simply came from Franz Marc’s love for horses, his own love for riding and the two artists combined love for the color blue.

Nonetheless, the movement organized exhibitions all over Germany. They also published an almanac spotlighting contemporary, primitive, folk art and even paintings by children.

Sadly short-lived, their activities ceased with the First World War. Both Franz Marc and August Macke died in the fighting. The group’s Russian members (including Kandinsky) moved back to Russia.

After the war, Kandinsky formed Die Blaue Vier (The Blue Four) in 1923. This group maintained The Blue Rider’s expressionism and abstract focus, touring America from 1924 onwards. 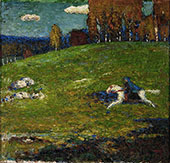 The Blue Rider 1903
By Wassily Kandinsky