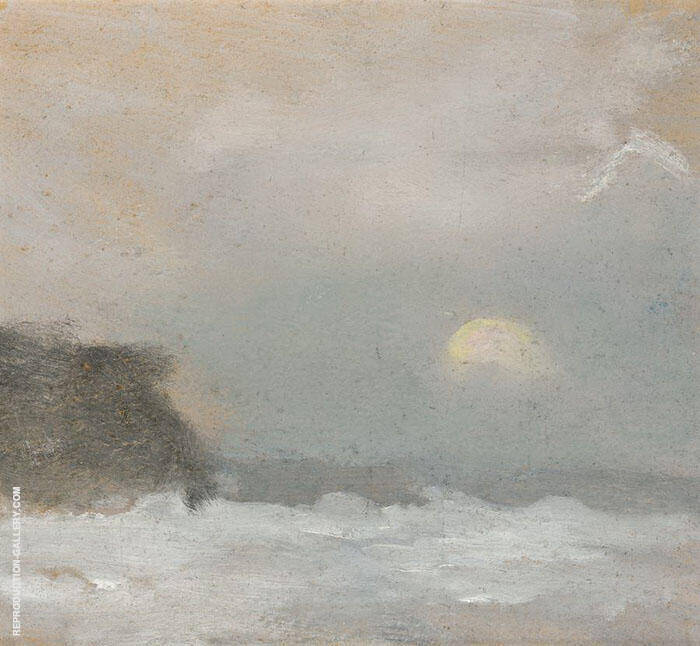 Clarice Beckett was born on 21 March 1887. She was a leading artist of the Australian tonalist movement; a group that emerged in Melbourne during the 1910s. As the result of her stunning yet delicate work, Clarice Beckett artworks are now celebrated as some of the greatest paintings of all time.

Clarice Beckett was the daughter of a bank manager, and she was born in the small town of Casterton, Victoria. She stayed in Casterton for the earlier part of her studies but later boarded at Queen’s College Ballarat for secondary school. It was here that the young Clarice revealed her artistic talents, developing a life-long passion for drawing.

Consequently, Clarice enrolled in private drawing lessons whilst at Ballarat. She left these lessons when the family moved to South Yarra but finished her secondary education at a nearby grammar school.

In 1914, Clarice Beckett enrolled at Melbourne’s National Gallery School. Associated with the National Gallery of Victoria, it was a prestigious private fine art college. Under the tutelage of Frederick McCubbin and Max Meldrum her work blossomed.

Around 1919, Beckett’s parents moved again. This time they moved to Beaumaris, a Melbourne bay side suburb. Unfortunately, both of her parents’ health soon failed which necessitated that she undertook nearly all the household duties and caring responsibilities. As a result, Clarice Beckett solely painted at dawn and dusk as the majority of her day was spent caring for her parents.

Out of seeming adversity however, the unique dawn and dusk light characterized Clarice Beckett’s Tonalism art. Her ability to reflect the shifting patterns of light, wind and nature secured her place as one of the leading tonalist Australian painters. Indeed, some have referred to Beckett as the “daughter of Monet” and a female artist who revolutionized the modern canvas art of Australia.

Clarice Becket paintings of Baumaris produced some of her best loved works. These include the vivid sunshine of Summer Day Beaumaris, the melancholic Beaumaris Seascape and the stunning beauty of Moonrise, Beaumaris.

Beckett faced strong critical opposition, both as a female artist and a tonalist Australian painter. Even her early teacher Max Meldrum argued that female artists expecting to do things equally well as men was “sheer lunacy”. He described the artists’ life as “unnatural and impossible” for women.

During the 1920s critics criticized the “dreariness” of her perpetual fogs, whilst others commented on a fuzziness and weakness of drawing. Despite this, Beckett’s critical reception improved in the 1930s with one reviewer (writing for Table Talk) comparing her to Whistler, Rembrandt and Corot.

It was only after her death in the mid-1930s that critics began to appreciate Clarice Beckett’s artworks. One reviewer described her ability to create fascinating “glowing, opalescent landscapes” in 1941. Another review published in The Bulletin particularly admired her painting of “motor headlights gleaming through evening mist”. Indeed, Beckett loved painting cars and man-made lights. They feature in paintings such as Motor Lights (1929), St Kilda Road (1930) and Taxi Rank (1931).

Whilst no major gallery purchased Clarice Beckett’s work during her lifetime – almost every Australian public institution now proudly displays her paintings. Today, her work sells for six figure sums. Winter Sunset was most recently sold (in October 2021) for $125,000 Australian dollars.

Beckett is celebrated today as a great modernist painter, famed for transforming modern canvas art in Australia. Although she was extremely talented at producing still-life and portraiture oil paintings, Clarice Beckett was always drawn towards landscapes and seascapes.

Her paintings reflected rural scenes, beaches and rolling landscapes – all enveloped in the atmospheric mists of early mornings and evenings. There is a mixture of vulnerability and calm in Clarice Beckett paintings reflecting the quiet stoicism of her life.

As a leading proponent of Australian tonalism, Clarice Beckett utilized the methods outlined by her early teacher Max Meldrum. He was a strong proponent of layering paintings “tone on tone” with a scientific theory of light and form. Beckett consequently layered paints on the canvas in the order she perceived these tonal impressions.

She did depart from some other strict “meldrumites” however, with a greater focus on color. Max Meldrum believed tone (i.e., relative lightness and darkness of one color-palette) should always take precedence over color. Despite this, many Clarice Beckett paintings such as Summer Morning, Beaumaris and Hawthorn Tea Gardens (1933) demonstrate her deep appreciation of the full spectrum of light, color and form.

One of her latest dated paintings, Bathing Boxes (1934) demonstrates Beckett’s distinctive ability to merge the tonalist movement’s focus on light and dark with her own uniquely soft color palette and striking forms.

Clarice Beckett stayed true to her love of seascapes and landscapes – but this ultimately killed her. In 1935, Beckett set out during a terrible storm to paint the coast just outside of Beaumaris. Four days later, she died of pneumonia on 7 July 1935. She was just 48 years old.

In 1936, Beckett’s sister and father organized a major exhibition of Clarice Beckett paintings at the Melbourne Athenaeum. They celebrated her life and work as part of the show.

Despite some critical acclaim during her lifetime, many Clarice Beckett paintings were subsequently abandoned. In 1971, 2,000 of her works were discovered (left to the elements) in a rural hayshed. Unfortunately, most of her paintings were beyond rescue. Despite this, around thirty paintings were later salvaged from the Montsalvat artists’ colony in Melbourne.

Numerous exhibitions have since celebrated Clarice Beckett as a great Australian painter. This includes a 1995 joint show with the photographer Olive Cotton at the University of New South Wales’ Ivan Dougherty Gallery. Subsequent retrospectives have toured national galleries around the country, whilst the most recent exhibition as part of the 2021 Adelaide Festival drew massive crowds. 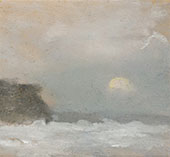