All Artists
C
CARAVAGGIO
The Calling of St Matthew c1600 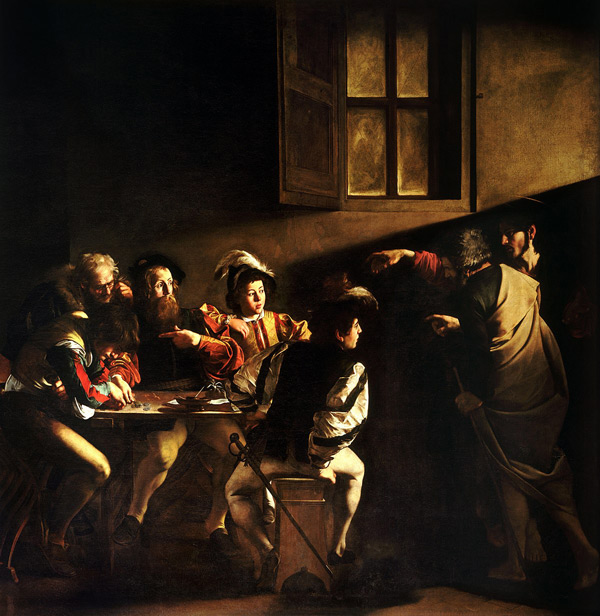 The Calling of St Matthew: Caravaggio

The Calling of St Matthew is one of the most famous paintings by Caravaggio. This large oil painting on canvas depicts the moment Jesus Christ inspires the apostle Matthew to follow him as Lord.

What does The Calling of St Matthew represent?

The painting presents a story from the Biblical Gospel of Matthew. Taken from Matthew 9:9, the scriptures describe how Christ spoke to Matthew, firstly, as a tax collector when he sat in his counting house working on business matters and then upon entering the room, when Jesus said, “Follow Me.”

As a result, Matthew experienced an epiphany and followed Jesus. Responding to criticism for mingling with tax collectors and sinners, Jesus replied, “I came not to call the righteous, but sinners to repent.”

A bright and dazzling stream of light illuminates the men’s awed faces, staring at their Lord in human form.

Christ’s hand stretches out towards Matthew. This action is important as it directly mirrors Adam’s outstretched arm in Michelangelo’s The Creation of Adam (1510).

The New Testament makes specific and explicit comparisons between Jesus and Adam on two occasions. The first is in Romans, and a second occasion appears in Corinthians, where St. Paul argues, “as in Adam all die, so in Christ, all will be made alive.” Later in Corinthians, St Paul describes Jesus as the “ultimate Adam.”

Which figure is St Matthew in Caravaggio's painting?

In the painting, Matthew sits with four other men, and Jesus enters the room with Saint Peter at his side and points at Matthew. Despite the seemingly simple narrative, there remains substantial debate about the exact identity of Matthew in the painting.

Traditionally identified as the bearded man with a surprised expression, Matthew points at himself. Matthew's gesture expresses an interrogative “Me?” in response to Christ’s instruction to follow.

Indeed, the same bearded man features in the other two St Matthew paintings created by Caravaggio, adding strength to the traditional interpretation.

Contrastingly, however, recent scholars posit St Matthew is the young man seated at the left-hand side of the table. The older man’s pointing gesture thus becomes “Him? In this understanding, the painting depicts the moment before young St Matthew raises his head to see Christ for the first time.

Where is the original Caravaggio Baroque artwork?

Created for the Contarelli Chapel in Rome, Italy, Caravaggio’s Saint Matthew paintings are true artistic masterpieces. This chapel was part of the Church of the French Congregation (San Luigi dei Francesci), a significant religious building.

As an important Italian Baroque painter, Caravaggio received the commission after his previous employer (Giuseppe Cesari) refused the work. Financed through a gift in the will of Cardinal Matthieu Cointerel, they were a considerable undertaking.

The work was enormously popular at its creation, with the Italian public appreciating the painting’s straightforward narrative and religious morals. Pope Francis has told how, as a young man, he frequently traveled to San Luigi to view and sit in contemplation before the painting.

Enjoy Caravaggio's artwork and many famous oil painting reproductions from our collection of religious paintings. 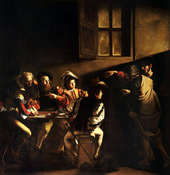 The Calling of St Matthew c1600
By Caravaggio