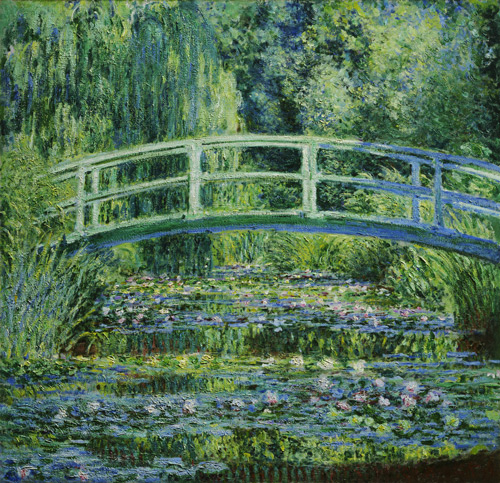 Even among famous impressionist paintings, Claude Monet Water Lilies and Japanese Bridge (1899) is one of the most recognizable images of all time.

The painting’s vertical format makes it particularly unusual among Claude Monet art. This allows Monet to celebrate his magnificent water lilies, guiding the viewer through his garden delights.

In 1883, Monet moved to Giverny, a small commune in Northern France.  Monet purchased a beautiful home just outside the town. He planned to transform a small pond on the neighboring patch of land (purchased in 1893) into an Asian-inspired garden.

After diverting water from the Epte River to expand the pond, Monet filled his watery wonderland full of various flowers, willow trees, bushes, and reeds. Of course, water lilies were also a key feature. Installed without the initial intention of creating art, Monet commented in 1924, “I grew them without thinking of painting them.” Artistic inspiration came later.

With the arrival of a Japanese wooden bridge (installed in 1895, specifically “for the pleasure of the eye and motifs to paint”), the scene was set for Monet’s enduring stimulus. He described how “all of a sudden” he gained an almost religious “revelation of the enchantment of my pond.”

Monet picked up his artist’s palette, and the rest is history. After commencing painting in 1895, Monet remained transfixed by his beautiful pond, bridge, and water lilies.

What is the message of The Water Lilies by Claude Monet?

Even amidst the myriad examples of Claude Monet famous paintings, Water Lilies and Japanese Bridge are particularly remarkable. The artwork’s “message” is simply Monet’s intensely detailed observation and appreciation of nature.

The lush and luminous brushwork immerses the viewer in the green canopy of the garden. The blue bridge provides pictorial relief, suspended near the top of the canvas. It almost serves as a horizon, giving perspective to a composition overrun with riots of green foliage.

Indeed, the greenery appears with controlled vertical dabs of paint, creating an upwards motion. Contrastingly, the lily flowers emerge through broader horizontal strokes, providing contrast and interest to the piece.

Cool green and blue tones dominate the composition. However, these cooler tones balance with the interspersion of the brighter pink, white and yellow water lilies. These flowers float on the pond's surface in a complex, interlocking pattern. Occasional glimpses of watery reflections are just possible amidst the foliage.

As well as balancing the colors and tones, the waterlilies provide a sense of perspective. The flowers gradually get smaller as the perspective lines join underneath the bridge.

What is the meaning of Water Lilies and Japanese Bridge?

Water Lilies and Japanese Bridge is a prime example of Claude Monet impressionist paintings. It also evidences the artist’s growing fascination with Japanese art and culture.

As well as the Japanese footbridge in this painting, he created stylized landscapes and even portraits of Madame Monet en Costume Japonais (1876). Monet also surrounded his rooms at home with Japanese woodblock prints and owned over 230 Japanese engravings by the end of his life.

Notwithstanding Japanese art's inspiration, Monet was committed to painting “en Plein air.” He worked outside in nature as much as he could. Monet painted in his garden or the surrounding countryside whenever the weather permitted.

Monet sometimes worked on eight (or even more) canvases on the same day. This enabled him to make the most of particular light effects, repeatedly returning to views and motifs. This attempt to capture ever-shifting atmospheric conditions (fixed in pictorial form) became a characteristic feature of the Impressionist movement.

How much is Claude Monet’s Water Lilies painting worth?

Claude Monet artworks are some of the most expensive paintings in the world. For instance, in 2019, Mueles or Haystacks (1891) became the most expensive impressionist artwork ever sold. It notched up a staggering $110.7 million at auction.

Water Lilies and Japanese Bridge currently hangs in the National Gallery of Art in Washington; GiftedGifted to the museum by Victoria Nebeker Coberly in memory of her son (John Mudd), it wasn’t an officially auctioned and purchased piece.

Consequently (and rarely amongst Claude Monet art), its value can only be guessed at. The work’s value is between $50 million and $150 million.

How many times did Claude Monet paint The Bridge and Water Lilies?

Water Lilies and Japanese Bridge is one of a series of twelve paintings created in 1899. They all present views of the light-dappled pond, water lilies, and overarching footbridge.

The concept of repeatedly returning to the same view (representing changing seasons and weather conditions) was common in Monet artworks. For instance, he often returned to the Haystacks theme and depicted the façade of Rouen Cathedral numerous times.

Monet initially exhibited the Giverny Water Lily series in 1900 at the famous Durand-Ruel Gallery in Paris.

Are Monet’s Water Lilies an example of impressionism?

Impressionist art utilizes small yet visible brushstrokes, combined with an open composition and an emphasis on light. The name of the style derived from another Claude Monet oil painting (Impression, Sunrise) created in 1872.

While elements of impressionism appear in Monet’s Water Lilies and Japanese Bridge, the composition remains relatively closed. There are no open spaces of expansive vistas for the eye to drift over.

In this way, the painting references the concept of medieval closed gardens, translated in Latin as “hortus conclusus.” Monet’s deeply meditative approach also foreshadows the symbolist evocation of a dreamlike contemplative atmosphere with art.

Despite this, while varying inspirations are evident in Monet’s water lilies (ranging from Japonisme to impressionism, symbolism, and medieval art), it remains a masterpiece of impressionist art and one of the most famous impressionist paintings of all time.

Art reproductions of many other water lily paintings are available from our extensive catalog of replica paintings. 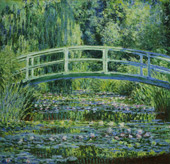