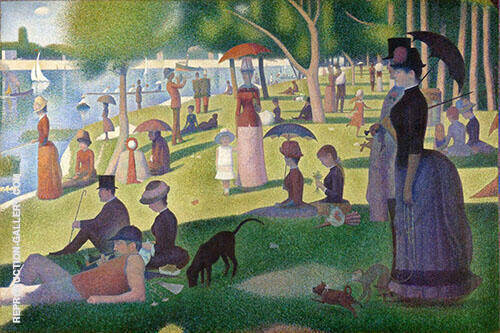 Created between 1884 and 1886, it is one of the most famous Georges Seurat paintings. The artwork measures approximately two by three meters in size.

Whilst creating the painting, Seurat particularly focused on the landscape. He produced several preliminary sketches of both the landscape and figures, before settling on the final composition. During this period, Seurat frequently sat on the banks of the river. He spent a great amount of time observing people, light, and society figures bathing in the French sunshine.

The Island of La Grande Jatte itself sits at the outskirts of the city of Paris. It lies in the middle of the River Seine, between the neighborhoods of Neuilly and Levallois-Perret. The island served as a hub of industry for many years before its transformation into a bucolic public garden. At the time Seurat painted Sunday afternoon however, the park was a firm favorite amongst Parisian elites.

The painting also mirrors the composition of an earlier work (Bathers at Asnières, 1884), which depicts Paris’ industrial history more clearly. In this work, factory smoke and chimneys rise in the distance.

Whilst Seurat’s working-class bathers rest in direct sunshine, Sunday Afternoon casts each figure in shadow. Amongst fashionable Parisian society, Sundays were a time for leaving the busy and sweltering Paris city center, and heading for the cool breeze of the many parks adjoining the River Seine.

Understood in this context, the young boy in the more lower-class Bathers at Asnières scene calls out to his upper-class compatriots on the opposing bank of the Seine.

Who are the people in Sunday Afternoon?

A large number of individual characters appear in this Georges Seurat artwork, and it’s thus worthwhile exploring each in turn.

Within the painting, Seurat depicts a fashionable couple on the right-hand side of the composition. The man wears a top-hat and the woman holds a sunshade whilst strolling through the park. Another well-dressed woman (situated to the left of the composition) strangely participates in a spot of river-fishing.

Other notable figures include a woman knitting, two soldiers listening to a trumpeter and another lady sitting under the glow of an orange umbrella.

Whilst the scene appears straightforward at first glance, many characters participate in unusual activities. For instance, a woman on the right-hand side holds a monkey on a lead. The woman fishing on the riverbank references the park’s infamy as an area for prostitution among the bourgeoisie.

Even more intriguing is the small girl standing in the center of the composition. She stares directly out at the viewer, inviting our response to the strange and unusual scene.

In a reference to the social upheaval taking-over French society (with the rise of the Industrial Revolution), Seurat encourages our judgment. Should the upper classes bathe in shade whilst others toil in factories just the other side of the river?

What type of art is Sunday Afternoon on the Island of La Grande Jatte?

Sunday Afternoon is a wonderful illustration of Georges Seurat Pointillism. Originating in France in the mid-1880s, Georges Seurat was the movement's first and principal proponent.

Pointillism refers to paintings where small dots gradually come together to form a complete image. Although initially coined by art critics to mock the work of Georges Seurat and Paul Signac, Pointillism was a revolutionary technique.

Pointillism relies on our mind’s amazing ability to blend dabs of color into fuller tones and shapes. It also stands in direct contrast to the traditional Classicism previously favored by the French Academy.

If one gazes closely at the painting, thousands of miniature dots and fleeting brush strokes appear. Stepping back however, these marks unify into one coherent and cohesive whole. Seurat believed this technique made colors more powerful and more vibrant than traditional approaches.

As well as Pointillism, A Sunday Afternoon on the Island of La Grande Jatte is also representative of Seurat’s work within the Neo-Impressionist movement. Coined by French art critic Félix Fénéon in 1886, the term referenced Seurat and his contemporaries.

How was Sunday Afternoon on La Grande Jatte created?

Seurat painted La Grande Jatte in three distinct phases. In the first phase (between 1884 and 1885) he mixed paints from several individual pigments, relying on traditional colors and tones.

In 1885-86, he revolutionized his process and dispensed with earth-based pigments entirely. Henceforth, Seurat solely utilized vibrant dots of pure color (in true pointillist style) which mix in the viewer’s eye, as opposed to the canvas.

The third painting phase took place during 1888 to 1889, when Georges Seurat added a colored border to the painting.

Fascinatingly, this border is painted in inverted colors that directly contrast with the main painting. Whilst Seurat’s intention is uncertain, this could represent the slowly shifting and inverting world of modern French society, that the artist so loved to paint.

How much is Sunday on La Grande Jatte worth?

Currently held by the Art Institute of Chicago, the painting is valued at over $650 million. Purchased in 1924, it’s thought the institute originally paid just $24,000 for the Georges Seurat painting

Initially exhibited at the Eighth Impressionist Exhibition (held in May 1886), the work launched to considerable public acclaim. It was consequently shown again in August 1886, dominating the Second Salon of the Société des Artistes Indépendants.

With this painting, Seurat transformed the relationship between art and science. With his establishment of the Pointillist and Neo-Impressionist schools, Georges Seurat artworks fundamentally changed the history of art. European art and society would never be the same again…

Browse our unparalleled collection of famous Georges Seurat oil painting reproductions to find the perfect pointillist artwork for your walls.

A Sunday on La Grande Jatte
By Georges Seurat