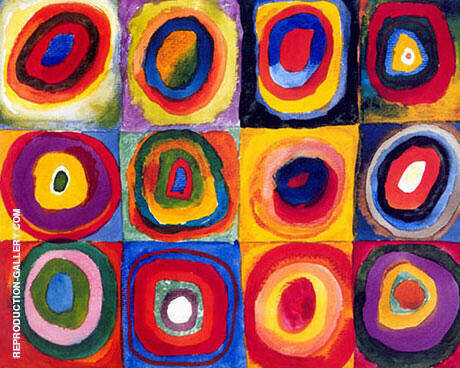 This famous Kandinsky painting is small in size but has a massive impact.

When did Kandinsky paint Squares with Concentric Circles?

Concentric Circles art by Kandinsky is the artist’s most recognizable painting, completed in 1913.

Despite this, it’s not a finished painting. Instead, it is a small study of color combinations and designs. Kandinsky often used similar tools as support material for his larger images.

Even so, it has become one of our most popular modern art oil paintings.

During his career, Wassily Kandinsky developed a unique and highly detailed color theory. He believed color caused the human soul to vibrate. For Kandinsky, color had a decisive influence on our bodies and nervous system. He even believed certain color combinations could cure disease.

Saying he could “hear colors” and “see sounds,” many Art Historians suggest Kandinsky experienced “synesthesia.” This term describes people who mix two senses at once.

Why did Kandinsky paint Squares with Concentric Circles?

Kandinsky painted Squares with Concentric Circles as a study of color and form.

He created a grid-like composition, with four circles in the horizontal rows and three in the vertical columns. In each square unit, a concentric circle dominates the sIn addition, each. Each multi-colored halo has a deep, transfixing center.

This experiment reflects Kandinsky’s views on the importance of circles. These simple shapes symbolize the mysteries of the cosmos. They also provided a medium for Kandinsky’s exploration of color. In 1930, Kandinsky explained how his fascination with spheres stemmed from planetary orbs and motion.

In addition, Kandinsky believed the most foundational artistic mark, the dot (or point), was also a small circle. This simple fact meant that all art, of any form, arose from circles.

This painting revealed a significant shift in Kandinsky’s artwork, away from figurative representation and toward more extreme abstraction.

What do Kandinsky circles mean?

He felt these simple shapes brought order and symmetry to any artwork and featured them in many famous Kandinsky paintings.

Building on this early study, Kandinsky later produced a series of artworks exclusively focused on circles. Between 1923 and 1929, Kandinsky made ten paintings, including Circles within a Circle (1923) and Several Circles (1926).

Speaking of Circles within a Circle, Kandinsky said it was his first painting that truly brought “circles to the foreground”.

Where is Kandinsky Squares with Concentric Circles?

Concentric Circles by Kandinsky hangs in the Lenbachhaus Museum in Munich, Germany. Acquired with the help of the Gabriele Münter Foundation in 1957, it’s remained with the gallery ever since.

Today, the painting remains one of our most desired art reproductions. As a bright, bold, and energetic work, it’s among our collection’s most prized famous painting replicas.