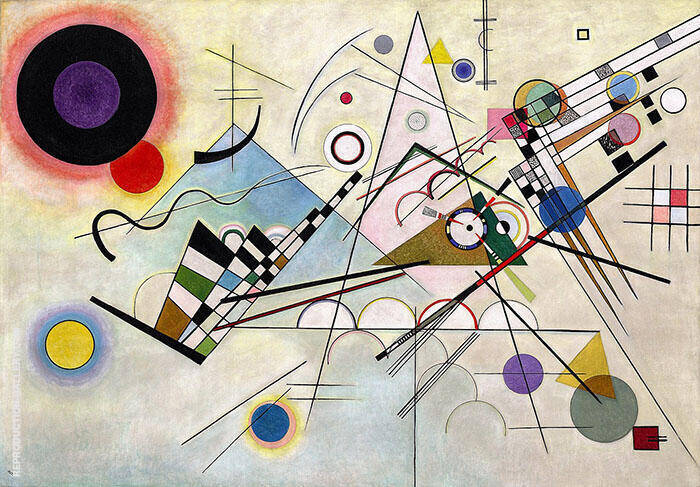 Wassily Kandinsky Composition viii 1923 is an abstract oil painting on canvas and one of our most popular oil paintings.

Kandinsky once said great art should “cause vibrations in the soul.”

Born in Moscow in 1866, Kandinsky’s parents gave him a thorough education in music. As a result, Kandinsky expresses his lifelong love of melody and harmony throughout his adult career.

The influence of music is evident in many Wassily Kandinsky paintings. His titles include phrases such as “Compositions,” “Impressions,” and “Improvisations.”

However, one painting particularly exemplifies this lyrical inspiration, and this painting is Kandinsky's Composition 8.

What does Composition 8 represent?

Completed in 1923, Kandinsky felt Composition viii was his most outstanding post-war achievement. Within the painting, linear elements, circles, and triangles create an interlinked series of increasingly complex geometric forms. They float and hover in front of the pale, shifting background.

The exact meaning of Kandinsky’s abstract art is mainly unknown. Despite this, irregular forms resembling suns, mountains, clouds, and shifting light and atmosphere are just identifiable.

These individual lines, shapes, and colors combine to create a unified geometric whole. The resultant effect is pulsating and calm, aggressive and peaceful, representing the artistic synthesis of opposing forces.

Indeed, circles are particularly significant within the composition, especially the dominating orbs floating around the edge of the canvas. Speaking of circles, Kandinsky described how their unique combination of “concentric and the eccentric” allowed for the artistic synthesis of “great oppositions.”

What type of painting is Kandinsky's Composition viii?

Instead of focusing on figurative representations, Kandinsky’s geometric forms aimed for a “universal aesthetic language.” It’s consequently tough to class Composition viii in any specific art movement although its closest alignment is with the Abstract Art Movement.

Kandinsky believed that abstract forms had uniquely expressive qualities. Suprematist and Constructivist artists, such as Kazimir Malevich, the creator of the legendary Black Square, share this view. However, Kandinsky's art's uniquely dynamic and lyrical nature sets him apart from the rest of the Russian avant-garde.

As a result of his increasing alienation, Kandinsky moved to Germany in 1922, teaching at the iconic Weimar Bauhaus school. He painted Composition viii while at school.

Kandinsky remained in Germany for the following ten years before the Nazi government declared the artist an enemy of the state. Hitler later confiscated his paintings as part of the “degenerate art” purges.

Why was Wassily Kandinsky important?

Kandinsky's contribution to some of the twentieth century's most exciting and controversial art movements is widely acknowledged.  Der Blaue Reiter group, which Kandinsky co-founded with the artist Franz Marc was at the forefront of these Movements.  Writing his memoirs, Kandinsky spoke of his discovery of “nonrepresentational” art. Walking into his studio one sunny evening in 1910, he came across an “indescribably beautiful painting.” The artist could not distinguish any meaning from it, only seeing form and color.

Kandinsky soon realized the painting was merely turned on its side, however. This experience led him to work on a series of abstract works, including Composition VII, 1913. Scholars believe these paintings were the first entirely abstract creations in modern art, making the artist historically relevant.

Wassily Kandinsky Composition 8 is like many of the artist's other paintings as it has little reference to figurative representation but instead derives inspiration from music and spiritualism. After Kandinsky, fine art oil paintings would never be the same again.

If you enjoy abstract art on canvas, please enjoy our extensive collection of oil painting reproductions by one of the most exciting artists of the 20th century