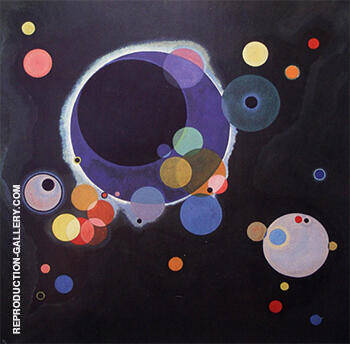 Wassily Kandinsky was a Russian artist famed for his pioneering abstract oil painting.

What is the meaning behind Several Circles?

Several Circles by Wassily Kandinsky represents Kandinsky’s exploration of abstraction and spiritual expression through art. It uses one straightforward form, the circle, to investigate color relationships, shape, and composition.

As a genuinely abstract painting, the meaning of Kandinsky’s work is entirely subjective.

The painting nonetheless demonstrates Kandinsky’s love of circles. Moreover, it marked a substantial shift from his earlier Blue Rider creations, which often focused on people and animals (such as horses).

The artwork is relatively simple, with circles imposed upon a black background. They appear in different sizes and colors. When the shapes overlap, their color changes. Some have white halos, and others sit amongst vibrant, concentric designs. Some are offset, such as the large blue and black shapes in the middle.

In addition, the forms become smaller and more spaced out towards the edge of the canvas. Kandinsky’s positioning seems a curious combination of random arrangements and purposeful design.

Kandinsky mainly focused on the color theory around this time. However, he found Johann Wolfgang von Goethe’s ideas about the “emotional effects” of color fascinating. Consequently, this painting demonstrates Kandinsky’s reflections on how color and form influence our deepest emotions.

Where did Kandinsky paint this artwork?

Kandinsky painted Several Circles after returning to Moscow at the end of World War One. From the early 1920s onwards, his increasingly abstract style underwent a substantial transformation.

Kandinsky progressively focused on the romantic ideas of the new Russian avant-garde. This involved “ideal” art separated from everyday concerns and artistic tradition. For Kandinsky, these developments meant focusing on the three foundational geometric forms: squares, triangles, and circles.

Artists such as Aleksandr Rodchenko, Kazimir Malevich, and Liubov Popova championed these ideas with the Suprematist art movement. Their attempts to create universal artistic forms deeply inspired Kandinsky. As a result, he worked alongside both Suprematist and Constructivist artists.

To what art movement does Several Circles belong?

Despite these exciting ideas, Kandinsky never fully adopted the geometric push of Suprematism and Constructivism. Instead, he used elements such as flat planes of color and clearly defined shapes. Still, Kandinsky maintained his crucial belief in the expressive power of abstract, organic forms.

As such, Several Circles is pure abstract art. Unfortunately, Kandinsky’s focus on abstraction meant he increasingly became isolated from many of his Russian colleagues.

Why did Kandinsky use shapes in his paintings?

Amongst Wassily Kandinsky's famous paintings, many feature circles. He felt this shape was the essential art form, as all mark-making arises from a single dot.

In addition, Kandinsky believed circles represented universal ideas of harmony, balance, and our place in the cosmos. He felt that circles directly lead viewers toward the “fourth dimension.”

Kandinsky's Several Circles shows continued interest in this simple shape. Speaking of orbs and spheres, Kandinsky claimed they allowed the “greatest oppositions” to merge into one.

If you love the energy and beauty of Wassily Kandinsky several circles painting, enjoy our extensive collection of famous painting replicas.