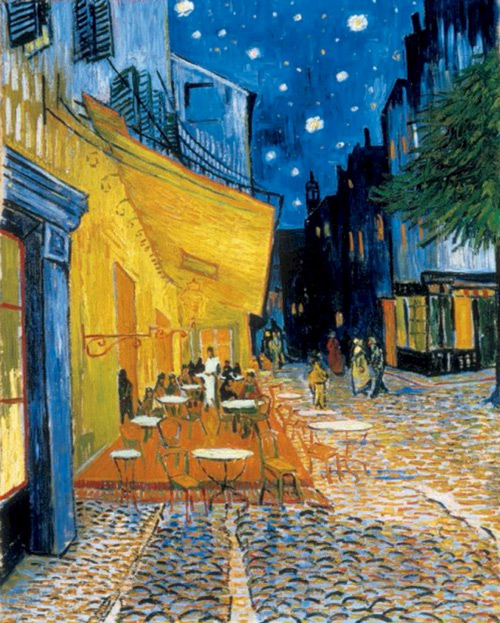 Van Gogh Cafe Terrace at Night was initially titled Coffeehouse in the Evening.  This 1888 painting is one of the most famous paintings by van Gogh. The painting shows a view of a café terrace in the evening. It was painted in Arles, France, and is a masterpiece of post-impressionism.

Although unsigned by the artist, the painting is described in multiple van Gogh letters, leading academics to confidently verify and date the artwork.

This oil painting on canvas is also known as The Café Terrace on the Palace du Forum.   Vincent van Gogh’s night café is in Arles, a picturesque coastal town in the South of France.  It was Van Gogh’s home from 1888 to 1889. During his time in Arles, Van Gogh created over 300 individual drawings and paintings. He also invited Paul Gauguin to live with him in the town in an ill-fated attempt to start an artist’s commune.

Today, art lovers can visit the exact spot where Van Gogh painted the cafe. The famous coffee house was situated on the northeast corner of the Place du Forum and refurbished in 1991. The Rue du Palais is visible in the painting, receding into a mysterious darkness.

Fascinated by the scenery of Provence, many Vincent van Gogh artworks originated near Arles. These include Bedroom in Arles (1888), Wheat Stacks in Provence (1888), and Portrait of Doctor Felix Re (1889).

During his time in Arles, however, Van Gogh’s mental health deteriorated, culminating in the infamous self-mutilation of his ear. As a result of his increasingly erratic behavior, the artist spent time in the Old Hospital of Arles, not far from his shining café.

When Van Gogh’s condition did not improve, the town’s residents petitioned for his admittance to a nearby mental asylum. The Saint-Paul Asylum at Saint-Rémy-de-Provence, where Vincent van Gogh’s Starry Night emerged.

Why did van Gogh paint Café Terrace at Night?

Van Gogh painted Cafe Terrace at Night during declining mental health. He spoke to his brother Theo of his “terrible need” for religion which prompted him to paint people and stars at night.

The coffeehouse would have been familiar to Van Gogh, reflecting his everyday reality in Arles. Indeed, in October 1888, the artist wrote to his friend, the Belgian painter Eugène Boch. He told Boch he’d painted the cafe “where we used to go” together.

Intriguingly, Vincent van Gogh’s Café Terrace at Night also represents industrial advancement in France at the time. In addition, the recently installed gas-powered street lighting in Arles fascinated van Gogh, inspiring him with new possibilities for illuminating the colors of the night.

What did van Gogh write about this famous oil painting?

Van Gogh wrote about the painting on three separate occasions. Soon after finishing the work, he penned a missive to his sister about a new painting depicting “the outside of a cafe in the evening.”

Van Gogh described the small figures drinking, huge yellow street-light, and even the building, pavement, and cobblestones in great detail. He also spoke of how he “enormously enjoyed painting on the spot at night” and reveled in the rich glows of the street lamps.

In the same letter, Van Gogh mentions Bel Ami, a novel by Henri Maupassant. van Gogh mentions the writer's description of “lighted cafes” on the streets of Pariwhileever, while Van Gogh felt it was “something like” his painting, Maupassant never described a starry sky in the scene.

Van Gogh Cafe Terrace at Night form part of the Kröller-Müller Museum collection.  This painting is one of our most popular art replicas.

Famous paintings by Vincent van Gogh are available in our extensive catalog of oil painting reproductions.