All Artists
M
MATISSE, Henri
The Joy of Life 1905 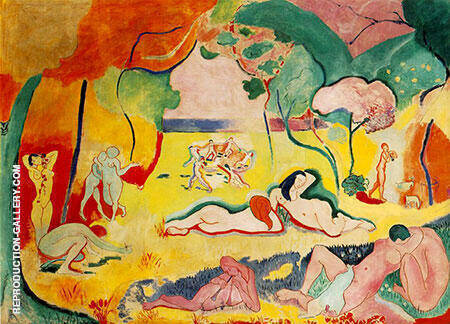 Henri Matisse The Joy of Life

Henri Matisse, The Joy of Life artwork, brings pleasure to anyone lucky enough to view it.

Perhaps no other painting expresses such pure delight as this colorful and joyous Henri Matisse artwork, also known as "le Bonheur de  Vivre."

When was this painting complete?

Painted between October 1905 and March 1906, The Joy of Life is one of the most famous Matisse paintings.

Alongside Les Demoiselles d’Avignon by Pablo Picasso, it’s widely lauded as one of the most beautiful works of modernist art ever created.

In addition, Matisse’s composition ignored the traditional pictorial perspective. Indeed, the figures seem to float almost in a two-dimensional plane. They recline, relax and frolic amidst the lurid jungle landscape.

Critics were appalled by the artwork’s apparent lack of theme and stylistic consistency. One reviewer even went so far as to call it the “end of French painting.”

Even fellow artists shared the critics' opinions. Notably, the French Pointillist Paul Signac commented that Matisse’s artwork had “gone to the dogs.” The artist also critiqued the “strange characters” and the “disgusting” flatness of Matisse’s coloring.

Despite this, other artists found the painting inspirational. Picasso (attempting to outdo Matisse) created Les Demoiselles D’Avignon in response. From the 1920s onwards, the public also came to appreciate this oil painting.

Why was Henri Matisse Inspired to paint this artwork?

While tracing artistic links may explain the artist's motivation, his primary aim was to create joyful artwork.

Art historians suggest links to the engraving of Agostino Carracci’s Love in the Golden Age. This work copied a sixteenth-century painting of the same name, created by Paolo Fiammingo.

Similarities between these works and Henri Matisse’s The Joy of Life include the bucolic pastoral setting combined with a vital element of fantasy.  However, the compositional device of a circle of dancers in the background is more significant.

Transfixed by this compositional element, Matisse not only featured dancers in The Joy of Life but also in another masterpiece, The Dance (1909-10).

Where is Henri Matisse’s The Joy of Life?

For Henri Matisse, Fauvism was an integral influence. He established the movement alongside André Derain. The Fauves treated color and artistic self-expression as paramount. These aspects took precedence over traditional figurative representation and compositional elements.

As an extreme progression of the Post-Impressionist movement (exemplified by Vincent Van Gogh), Les Fauves encountered significant art-world hostility. The Joy of Life was Matisse’s response to a particularly hostile critical reaction at the previous Salon d’Automne in 1905.

Despite its prominence at the time (and to Matisse), Le Bonheur de Vivre is relatively little-known among Matisse artworks. This is primarily due to the Barnes Foundation not allowing color reproductions for many years and the gallery’s comparatively suburban location.

Now you can bring color and joy into your home or office with museum-quality painting reproductions of Henri Matisse artwork.

The Joy of Life 1905
By Henri Matisse