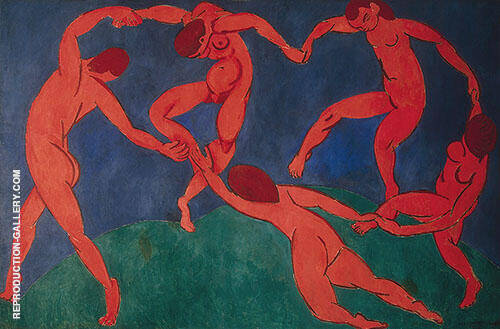 The Dance painting by Henri Matisse is the artist’s most famous creation.

The Dance was painted in 1910 and it is broadly recognized as a high point in Matisse’s career and a defining moment in modern art.

What inspired Henri Matisse to paint?

With The Dance, Matisse aimed to represent a state of complete artistic and creative immersion. The rhythmic succession of nude dancing figures communicates feelings of emotional liberation, lightness and aesthetic hedonism.

Speaking to an interviewer in 1909, Matisse said “What I dream of… is an art of balance, of purity and serenity”. This was the same year he began work on The Dance.

Despite this, commentators identify tension inherent within the piece. Gravity belies Matisse’s intended lightness. The figure closest to the viewer has lost their grasp of their companion.

This break threatens a violent stop to the inexorable orbit of grace and motion. The nearing disaster expresses the truth that life and joy are only meaningful in relation to their opposites.

The composition is reminiscent of William Blake's Oberon, Titania, and Puck with Fairies Dancing (1786), according to artistic inspiration. It’s unclear whether Matisse directly borrowed from the artwork, however.

Matisse’s dancers originally appeared as a small detail in the background of another of his artworks, The Joy of Life (1905).

What type of art is The Dance by Henri Matisse?

The painting shows five people dancing in the air, their faces filled with joy. They are painted in red and green and blue. This classic color palette strongly echoes the Fauves paintings.

Directly translating as “the wild beasts” the Fauvist movement emphasized painterly emotion and vivid color. This was in direct contrast to the representational realism prized by the Impressionist movement championed by Claude Monet.

The Fauvist style began around 1904 and continued until the early 1910s. Led by André Derain and Henri Matisse, it was characterized by bold brush work and simplistic compositions.

As an extreme progression of Van Gogh and Paul Gaugin’s Post-Impressionist approach, Fauvism also took inspiration from Expressionist painters such as Wassily Kandinsky and Franz Marc.

Where is The Dance by Matisse?

Commissioned at the behest of Russian businessman and art collector Sergei Shchukin, The Dance currently hangs in the Hermitage Museum in Saint Petersburg, Russia.

It remained in Shchukin’s home until the Russian October Revolution of 1917.

Shchukin was an avid art collector, particularly fond of French Impressionist and Post-Impressionist painters. He enjoyed a long working relationship with Matisse, explaining this special commission.

The Dance 1910
By Henri Matisse