All Artists
P
PISSARRO, Camille
The Boulevard Montmartre at Night 1897 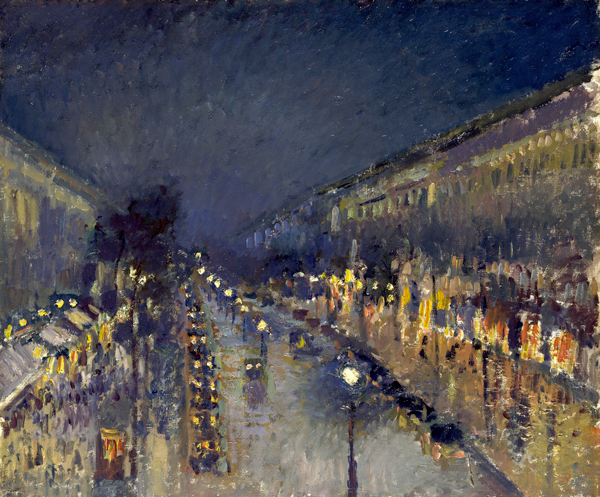 The Boulevard Montmartre at Night 1897 By Camille Pissarro

Painted in 1897, The Boulevard Montmartre at Night is a stunning example of Camille Pissarro impressionism.

Where was The Boulevard Montmartre at Night created?

In February 1897, Camille Pissarro rented a suite at the Grand Hôtel de Russie on Rue Drouot, Paris. The Boulevard Montmartre is located just East of the hotel. Despite the name, this road isn’t in the Montmartre area of Paris. Instead, it’s located just north of the 2nd Arrondissement.

The Grand Boulevard is also just south of the Folies Bergère, the bar made famous by Édouard Manet.

In the late nineteenth century, the streets of Paris were transforming. The civic planner Baron Haussmann radically restructured the city. He tore down the city’s cramped alleyways and winding lanes, replacing them with the wide boulevards and large public parks Paris enjoys today.

These new urban spaces were a particularly rich vein of artistic inspiration for the impressionist artists, particularly Manet, Renoir and Claude Monet.

Up until this point however, Camille Pissarro artworks depicted rural peasant life. This included works such as Woman in a Meadow, Spring and Shepherdess. He returned to Paris in the late 1890s due to his deteriorating health and worsening eyesight, explaining the shift towards urban subject matter.

Why did Pissarro paint Boulevard Montmartre

Fascinated by contemporary street scenes, Boulevard Montmartre is actually one of fourteen Camille Pissarro paintings depicting this Parisian street. Despite his fascination with the theme, this 1897 artwork is the only example of a night-time street scene.

Writing to his son on 13 February 1897, Pissarro commented “I have a splendid motif” which he planned to “explore under all possible effects.” Despite his pleasure with the scene, Pissarro noted the artistic difficulties of representing carriages, buses, trees, people and big houses. Somewhat wryly, he simply opined “it’s tricky”.

Of course, mastering the technical challenges of depicting precise perspective from a high vantage point was key for Pissarro. In the painting itself, he creates an accurate sense of perspective through the diagonal lines of the pavements and rooftops.

These lines are in turn reinforced by the orderly rows of carriages, streetlamps and trees. All the lines meet just left of the painting’s center, with the plunging “V” shape of the deep, dark sky further enhancing the feeling of space, depth and movement.

What is the meaning of The Boulevard Montmartre at Night?

This work is a particularly intriguing painting, purely representing an urban scene. For Pissarro, the “meaning” was simply to recreate his impression of the Parisian city streets. Traditional elements such as the moon and stars aren’t visible amidst the neon manufactured lamps of a rapidly changing Paris.

Indeed, the recent “electric candle” lamps (invented in 1876) were a new addition to the French capital’s streets. Represented with thickly loaded cool-white paint in Pissarro’s work, they serve as manmade imitations of the absent celestial constellations.

These cool white lights also contrast with the warmer yellow and oranges of the shops below, as well as the oil-burning lamps of the carriages and cabs waiting to collect revelers at the Théâtre des Variétés.

The entire scene plays with the effects of light, enhancing reflections by depicting wet pavements in the aftermath of a downfall. Alive with energy, Pissarro’s rapid brushstrokes, dashes and daubs shimmer with the crowds and city itself.

How much is Camille Pissarro Boulevard Montmartre worth?

In 2014 Pissarro’s Boulevard Montmartre sold for a staggering $20 million.

Sadly, for the artist however, Camille Pissarro paintings didn’t sell particularly well during his lifetime.

Ironically, Pissarro painted the Boulevard series partly with financial reasons in mind. In early February, Pissarro wrote to his son that the famous Parisian art dealer Paul Durand-Ruel purchased six street “snow effects”. The dealer suggested a series of boulevards on larger canvases as a “good idea” from a commercial perspective.

The Boulevard Montmartre at Night 1897
By Camille Pissarro